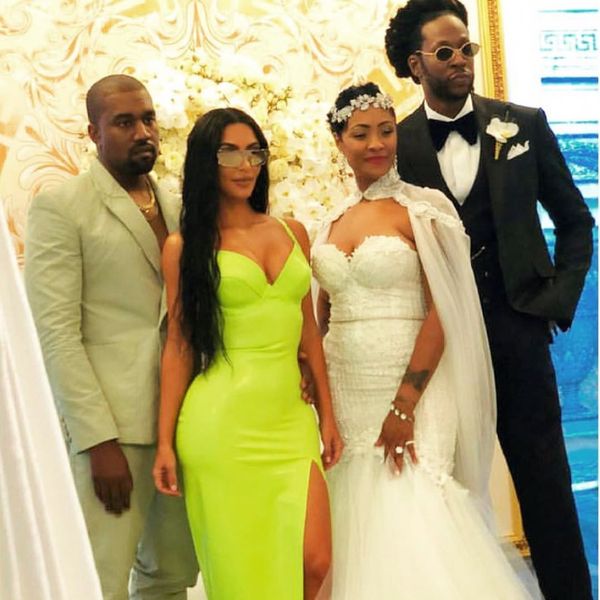 On Saturday, Kanye West and Kim Kardashian West hit up 2 Chainz and Kesha Ward's wedding at the Versace Mansion in Miami. As usual, Mr. and Mrs. West made quite the statement with their fashion choices. Kim opted for a neon green latex number reminiscent of her outfit to Kylie's 21st birthday bash, while Kanye wore a mint green Louis Vuitton suit sans undershirt. But the most eye-catching detail between the couple's outfits were Kanye's chunky undersized slides, worn with socks.

This fashion moment is definitely questionable not because of the look, which to be honest isn't that bad if the artist was going for a more casual comfort look over high style. The slides, which are part of Yeezy Season 6 and cost about $150 a pair, appear to be too small for Kanye. His feet are visibly dangling off the end of the sandals, and people are very confused.

I was about to say Kanye looks so good until I looked at his feet. https://t.co/u26KjERt54

Why Kanye decided to do this to himself, we're not sure we'll ever know. Did we mention he also lifts Kim into her car after the event? You do you, 'Ye.

You’re Already Following Chinqpink, Now Get to Know Her