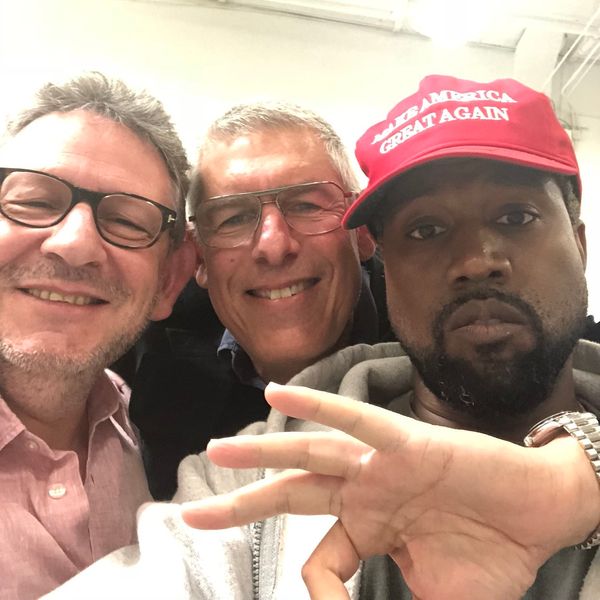 After a relative hiatus from the public eye, Kanye West returned to Twitter on April 13 to ostensibly promote new music. What followed was more than any of us could have predicted. Here's a running timeline of what Kanye's been up to the past few days, from expanding Yeezy internationally to supporting Donald Trump:

April 13 — CEO of Twitter Jack Dorsey welcomes Kanye back to the platform after an extended absence and (relative) time out of the public eye:

April 17-18 — Kanye starts tweeting about topics including artistic expression, creative license and capitalism (there are far too many to include, but here's a sampling):

often people working with the existing consciousness are jealous of those who are more in touch and they become har… https://t.co/vll90kKHE2
— ye (@ye)1523837497.0

You have the best ideas. Other people's opinions are usually more distractive than informative. Follow your own vi… https://t.co/wgQ0ElzjBm
— ye (@ye)1524063799.0

April 19: Kanye tweets that he's producing high profile albums for artists including Nas and Teyana Taylor in addition to making his own album (and one with Kid Cudi):

April 20 — More tweets about creativity and capitalism, plus some expansive Yeezy brand updates:

I don’t believe in horizontal hierarchy. If you build a ladder too high it’s actually most dangerous for the people at the top.
— ye (@ye)1524252210.0

People demonize people and then they demonize anybody who sees anything positive in someone whose been demonized
— ye (@ye)1524421780.0

He also loves his Tesla:

April 23 — Kanye retweets a series of videos made by "Dilbert" creator and Trump supporter Scott Adams, in which Adams says Ye is ushering in a new "Golden Age" by retweeting Candace Owens:

Hot 97's Ebro Darden says on his radio show that in a phone conversation, Ye said, "I love Donald Trump." The Hot 97 crew says Kanye is "out of touch" with the problems of ordinary black and brown people:

April 24 — It's reported that Kanye has parted ways with his former management team, including Scooter Braun, after he asked them to work for him full time and they declined:

I am currently the single highest paid person in footwear. That means I make more money on shoes than Michael Jordan.
— ye (@ye)1524666974.0

Kanye refers to "fake news," specifically calls out certain outlets who have questioned his mental well-being:

Kanye tweets photos of his beautiful Calabasas home to prove he's not in the "sunken place" as some suggest:

Free thinkers don't fear retaliation for your thoughts. The traditional thinkers are only using thoughts and words… https://t.co/ShRW1lE3sA
— ye (@ye)1524673315.0

Kanye says Trump is his "brother," says they both have "dragon energy:"

But that he loves Hillary too:

And that he's out of the sunken place (so was he previously in it?):

Kim steps in, kind of:

Kanye tweets a picture with Lucian Grainge and Lyor Cohen while wearing a MAGA hat, setting the world on fire:

Donald Trump retweets and thanks Kanye:

Chance the Rapper weighs in:

Azealia Banks weighs in too:

Kanye says he's not worried about what his fans might think:

And is apparently still mad that Obama didn't work with him on Chicago (but Trump took a meeting with him, is that what this is all about?)

Just another day in Calabasas.