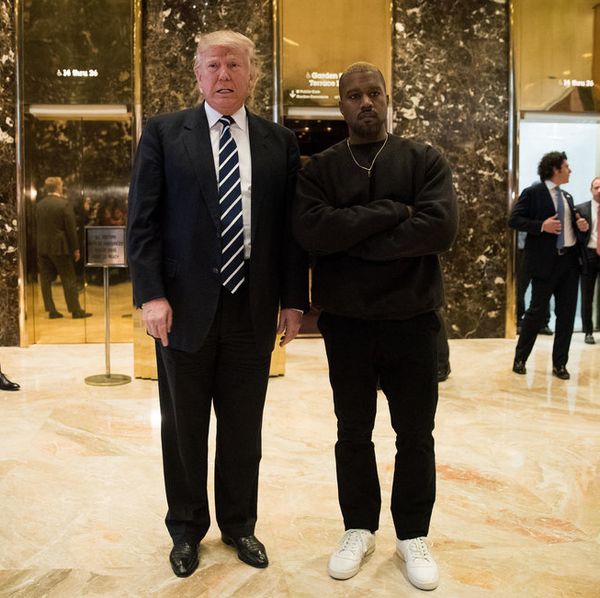 Whether you think Kanye West's declaration of support for President Trump on Twitter was a troll, an album marketing ploy, or genuine affinity for the man who brought you mass deportation and perpetuated racism, the current administration doesn't care. In fact, they're using it to sell MAGA hats (which Kanye posted himself wearing).

As a refresher: Kanye underlined his adoration for Trump on Twitter, then posted a photo of himself wearing a MAGA hat, then uploaded another picture of just the hat alone with the caption "my MAGA hat is signed," and then a video emerged of him freestyling in the cap. It didn't take long for the Trump administration to jump on any celebrity support and use West's endorsement to sell hats.

The Trump 2020 team sent the following text to its donor list: "DON'T BE SILENCED," it begins in bold. "The American people do not want to be told what to think or who to support. Group think is a mandate in today's society, and when a free thinker like Kanye West speaks truth, they attack him. We support Kanye speaking his mind, even if sometimes we do not agree on the issues." With a link to purchase the MAGA hat, it concludes, "Do not let them silence you. Get your red MAGA hat today."

Trump also went on Fox & Friends this week and took the time to give Yeezy a personal shoutout, praising his "good taste." He said, "Kanye looks and he sees black unemployment at the lowest it's been in the history of our country. He's smart. He says, 'You know what, Trump is doing a much better job than the Democrats did.'"

At this point, Kim Kardashian, John Legend, ICE-T, Lupe Fiasco, Azealia Banks, Janelle Monáe, Smino and more have weighed in on Kanye's tweets, not to mention countless celebrities and previous Kanye-collaborators (including Rihanna, Justin Bieber, Kendrick Lamar and The Weeknd) have unfollowed him.