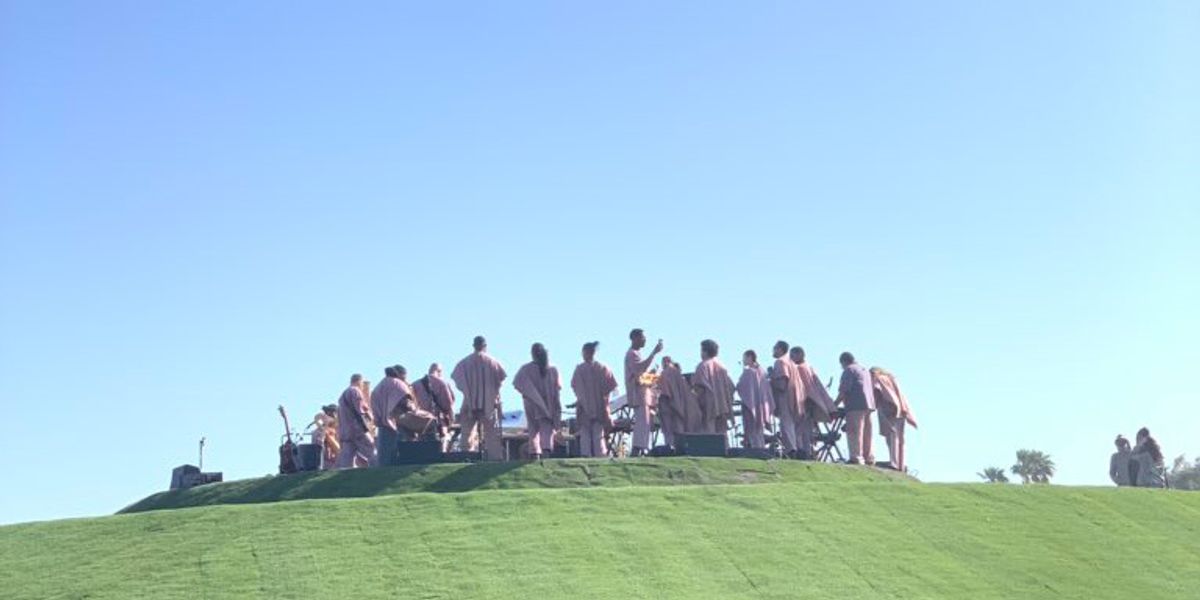 If you follow the Kardashians on social media, you know that they typically spend their Sundays doing worship in an exclusive service hosted by Kanye West. It's usually set in an open space, with the churchgoers all in a circle, and the choir and band led by Kanye. Everyone typically wears monochrome clothing. And as seen from Kim, Kourtney, and Khloé's stories, there's a lot of lively singing and dancing featuring little Nori.

Now, Kanye brings the service to day two of Coachella 2019's second weekend in honor of Easter. And, yes, the whole Kardashian Klan came to celebrate the Resurrection on the mountain all dressed in this Sunday's pink. The band also featured Chance the Rapper, Ty Dolla $ign, and Dani Moon.

Kanye Sunday Services on Instagram: “Link in bio (Be there or be square 👀) Cc: @photosofkanye”

Saw chance and em, but then I saw @070shake 👀 #psyched!! #Coachella #Kanyesundayservice pic.twitter.com/qpK9sxoYPW

While Coachella attendees weren't on the mountain with the main crowd, shuttles brought them to the bottom of the hill, behind a barrier with a view of the band. Sadly, people live streaming the service don't have the same view, as Kanye seems to have made the stylistic choice to shoot the entire thing with a fisheye lens.

#tfw There is no line for the Coachella shuttle to #kanyesundayservice 🙌🏾 praise God and Happy Easter! Let’s do this. 🙏🏾
— Kimberly Bryant (@Kimberly Bryant)1555860199.0

coachella easter sunday has FINALLY started but can we not view this through a fish lens? 😩 #Kanyesundayservice pic.twitter.com/6aBg5BfofE

Still, people seem to be enjoying the program, and even comparing the service to the legendary Stevie Wonder's music.

Last night, Kanye also performed with Kid Cudi on the Coachella stage. Initially, Kanye was slotted for a headlining spot at the music festival, but the organizers wound up getting Ariana Grande due to complications in logistics with Kanye's desired arrangements involving port-a-potties.