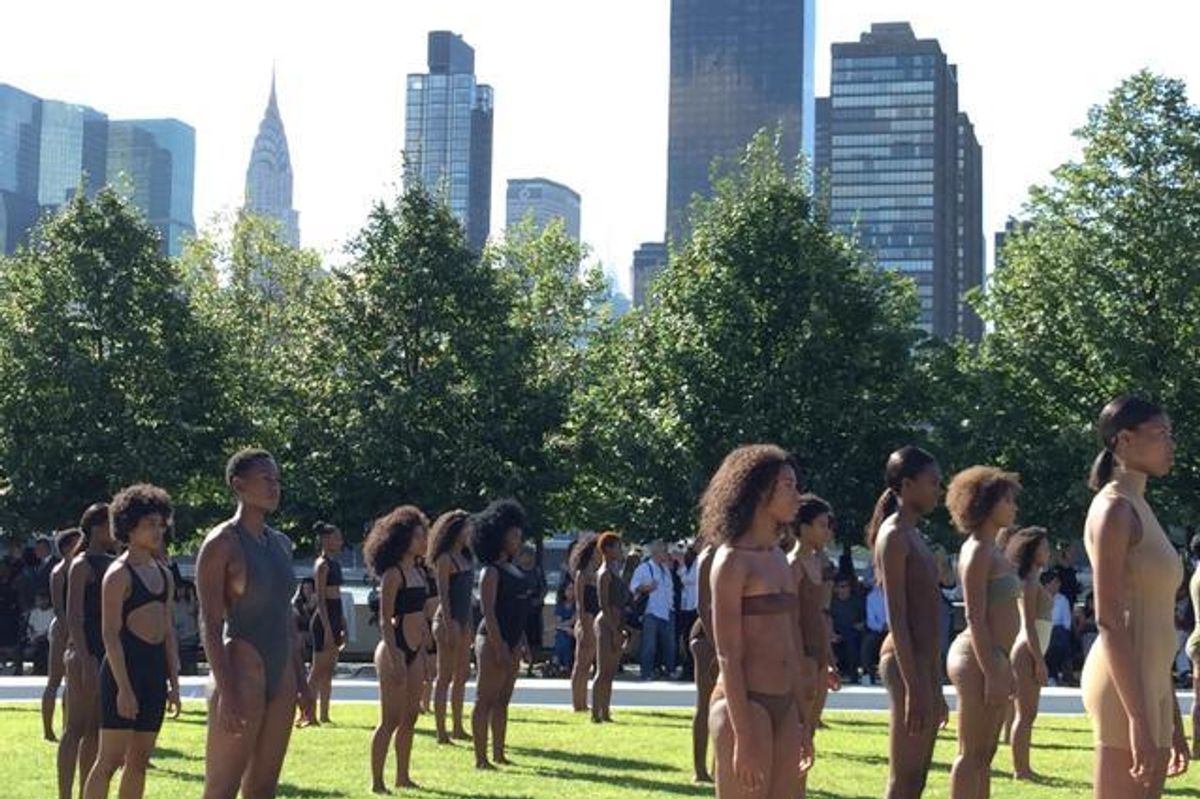 Your chances of getting burned by the cigarette of a drunk person waiting to get into Up & Down has increased ten-fold -- it's New York Fashion Week! Kanye West is kicking off the nine-day Power Pageant this afternoon with his Yeezy Season 4 fashion show. Though the details of this fashion show have been scarce (as opposed to his hugely hyped Life of Pablo Ye-travaganza at Madison Square Garden show in February), information started trickling out today.

This morning, members of the press were told to arrive at a bus 90 minutes before show time, where they would be taken to an undisclosed location. Page Six, however, says the show will take place on Roosevelt Island. They're also reporting that "Fade" feline goddess Teyana Taylor will be making an appearance at the show.

West has been receiving backlash for Season 4's casting call, which was held in New York over the weekend and specified that only "multicultural women" need try out. A topless protester who showed up to the casting call with "they want black features, not black girls" scrawled across her chest, an image the circilated on Twitter for most of Monday and Tuesday, posted an essay online yesterday on why she took a stand. "This is an indictment of not just Yeezy but the entire fashion and beauty industry in which there is a racialized hierarchy of beauty which is a ubiquitous symptom of the legacy of colonialism," she wrote. "Regardless of whether Yeezy does choose to include darkskinned women in the end, the coded language of the casting call was clear and a part of a broader problem of colorism in the fashion industry."

In an interview with Vogue today, West addressed the controversy. "How do you word the idea that you want all variations of black?" he said, adding that "the ten thousand people that showed up didn't have a problem with it."

4:54: Do the models have to stay like this forever?

4:38: Someone has emerged to hand out bottled water to the models.

Now the models have water bottles and they have to be responsible for those water bottles. #YeezySeason4 pic.twitter.com/kLRLhrDOX6
— Tricia Gilbride (@tricia_gilbride) September 7, 2016


4:35: A model passed out in the heat and an audience member gave her water:

This better be part of some "performance" and we're all being trolled because otherwise it's really bad. #YeezySeason4
— Stella Bugbee (@stellabugbee) September 7, 2016

Model passed out in the heat is given water by man in the audience but no one on the #YeezySeason4 team helps.
— Stella Bugbee (@stellabugbee) September 7, 2016

This is shameful and horrible and I regret coming. #YeezySeason4
— Stella Bugbee (@stellabugbee) September 7, 2016


3:45 Paper editorial director Mickey Boardman is on the ground and sending photos. Here you go:

Kendall and Kylie are on the way, decked out in Yeezy, Season 4; Kylie channeling Kim's platinum blonde look from SS16 Yeezy show.

So is Spike Jonez!

Spike Jonze on way into #YeezySeason4 The rest of us still outside! pic.twitter.com/QHjUZAoGVc
— @Booth (@Booth) September 7, 2016

People are revving up their free Tidal subscriptions...a time to SCAM!

off to this free Tidal trial I just created.. again lol. #YeezySeason4 pic.twitter.com/TjQPkafWP5
— am. (@AshleyMarietta) September 7, 2016

Lots of milling around.