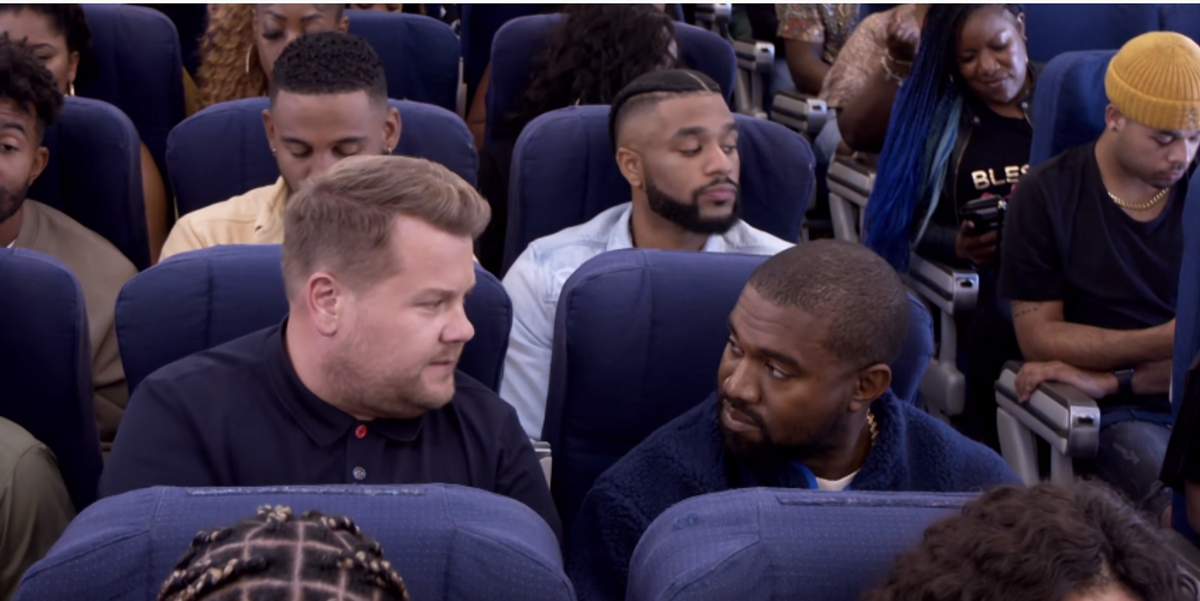 After finally releasing his long-awaited gospel album Jesus Is King, Kanye West is on the publicity circuit. He appeared on last night's James Corden for a twist on the show's popular carpool karaoke segment, swapping four wheels for two wings. That's right, it's "airpool" karaoke, except minus the private jet you'd expect. Corden and Kanye fly coach, with West's gospel choir as their fellow passengers.

Whatever you think of Jesus Is King, or any other aspect of Kanye's confusing MAGA hat Christian era, it's nice to see him looking so happy and relaxed during the interview. He and Corden discuss the new album, his and Kim Kardashian's marriage (their nightly routine includes watching Dateline and reading the Bible), and, uh, tax returns. One takeaway: Kim and Kanye are apparently planning on having three more kids, bringing the total up to seven.

There's also the requisite karaoke, although Corden doesn't much take part. Kanye raps to some Jesus Is King tracks, backed by the choir, who Corden refers to as "the most expensive iPod in the world." There's a Christian cover of Nelly Furtado's "I'm Like a Bird," and we also get a fun throwback to the original Kanye West gospel track from College Dropout, "Jesus Walks."

Related | Kanye Is Changing the Lyrics of His Old Songs

There's plenty of Kanye's trademark egotism, obviously. "God is using me as a human being," West tells Corden. "As humbly as I can put it, he's using me to show off."

Watch the whole segment, below.