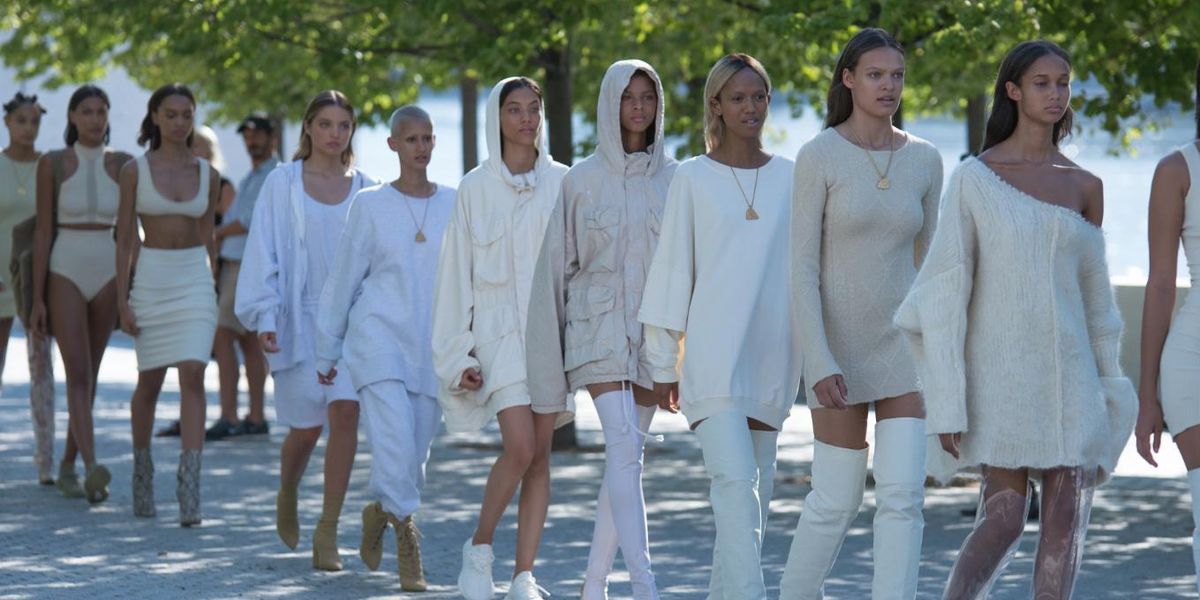 This week we witnessed the unveiling of Yeezy Season 4, Kanye West's latest collaboration with Adidas that saw everything from heat-induced model fainting to the super-expected mix of minimalism and athletica. And the feedback was mixed. Some critics described the collection and show as boring, messy, and a "total disaster" (woof), while others claimed it was at least an improvement from Seasons 1 through 3. Pieces were neutral, slim-fitting, and everything you'd see on a Kardashian, and while prices and availability are TBD, we can assume "expensive" and "good luck" will best describe both.

But that misses the point. While the collection itself may be controversial and freakishly above our price points, Kanye is helping to create a uniformed landscape in which fashion is accessible to everybody. Specifically, in that if you can't snag actual Yeezy pieces, you can pick ones up that look close enough to get the job done. Athleisure may seem boring, same-ish, and OTT minimalist, but it also erases the "us versus them" approach to fashion that's dictated so much of the industry for so long.

Kanye's lines with Adidas are perpetuating the Star Trek effect: He's erasing class and elitism by blanketing the masses in same. Critics like Vidal Wu are right: The clothing itself is a scam that takes advantage of our obsession with Kanye and our willingness to shell out top dollar to dress the way he tells us. But the beauty in Yeezy isn't in the actual collection, it's in our ability to copy it for less. The uniformed nature of Yeezy Season 4 laid the groundwork for the rest of us to mimic its cuts and colors. No one cares if you're wearing Yeezy or a no-name bodysuit -- the look is the look.

This accessibility is the beauty of the recent wave of celebrity endorsements and collabs. Nostalgia has ushered in nineties-inspired Tommy Hilfiger collections by Gigi Hadid and Calvin Klein resurgences with Kendall Jenner, and breathed new life into Puma. Earlier this week, Rihanna unveiled her Fenty x Puma creations--clothes and shoes that capitalized on comfort, but also fall under the same athleisure umbrella as Yeezy or OG Calvin. And like those, what's spectacular about it isn't the collection itself, it's that you can deck yourself out in similar looks via vintage pieces, outlet stores, or Forever 21 knockoffs. Because in the end, everybody's just sitting around, looking comfy.

But no one has capitalized on this idea like Drake. Ironically, the man whose friends keep millions of dollars in jewelry on buses has outdone everyone in terms of Everyman™ aesthetic. Despite rapping about his mortgages, his cars, his houses, and his lifestyle, Aubrey still sings the praises of The Cheesecake Factory (you know he loves to go there), and has launched the OVO Store, which offers the pieces he wears for a (relatively) reasonable price. The shop -- online and IRL -- boasts sweats, jackets, polo shirts, hats, and tees. And despite some pieces running for a couple hundred, you can also pick up an owl-branded hat for a cool $40. Meaning you don't even need to knock off Drake's trends, you can just wear them. Or, more specifically, that the untouchable rapper is still -- at least aesthetically -- within reach.

In a climate in which general elitism is condemned and accessibility celebrated, the price of a collaboration or an independent line still speaks volumes to the way the creators want us to see them. On one hand, Kanye might preach the merits of clothes-as-art, of wanting to erase elitism among wearers and of McDonald's fries, but his approach to Yeezy Season 4 still sends the message that he is a god (and, correspondingly, his clothes are for the god-like). On the other hand, Rihanna and Drake's style separation from their fanbase is minimal. You may have to reconcile spending a little more than you'd like on a top, but you can chalk it up to a splurge or investment. You can still make rent. They, as stars, are just like us.

But the greatest gift from the athleisure movement is permission to create our own answer to these extensions of celebrity selves. Most of us cannot afford Yeezy anythings. Some of us won't ever be able to justify an OVO toque or Fenty x Puma tear-aways. But that doesn't exclude us from participating in the fashion discourse. We can cloak ourselves in knock-offs and unbranded merch and create our own interpretations of what we're seeing our favorite pop stars wear. We can dress in the spirit of celebrity without having to dress exactly like them. And in reality, that's what uniform fashion is all about. Because if you've ever worn a uniform, you know that your own twist on it is what makes it yours.