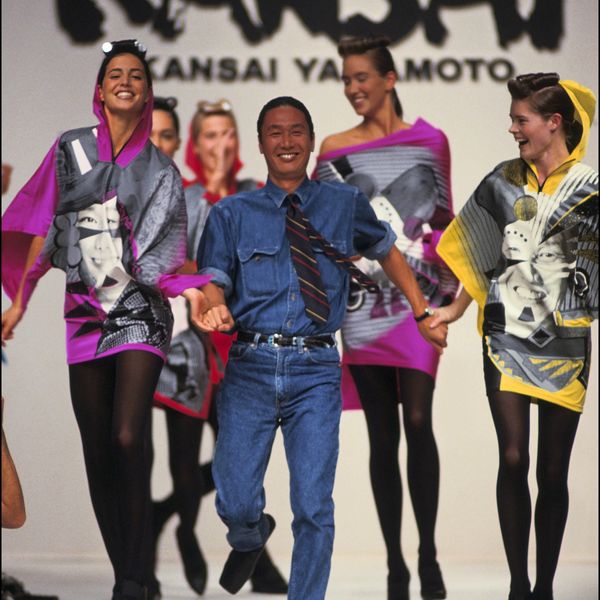 Yamamoto's designs have been some of the most conceptual among his generation, experimenting with structural shapes, geometry and vibrant colors to propose new ideas about wearable art.

When he debuted his first collection in 1971, Yamamoto became the first Japanese designer to show at London Fashion Week. He quickly made a name for himself by combining elements of traditional Japanese culture with modern pop art motifs. Yamamoto's design signatures, such as bold shoulders and graphic patterns, have also provided inspiration for designers like Rick Owens. More recently, he collaborated with Louis Vuitton for their Kabuki-inspired Cruise 2018 show.

Yamamoto is also remembered for his forward-thinking "super shows" that made fashion events more accessible to everyone. Held in the '90s, these shows merged dance, music and fashion in a variety of international locations, drawing upwards of 120,000 people. A "super-energy" show scheduled for July 31 will continue as planned, according to his team, per BCC News.

But he's perhaps best known for his long partnership with David Bowie, having created many of the late rock star's Ziggy Stardust-era looks, such as Bowie's iconic black-and-white striped bodysuit and one-legged, one-shoulder printed leotard. He also collaborated with Lady Gaga, dressing her in his "Fashion in Motion" collection during her ARTPOP era and for her 2016 Bowie tribute at the Grammy Awards.

Fashion creatives like Marc Jacobs, Anna Dello Russo and Anna Sui paid tribute to Yamamoto on social media this morning. Jacobs, in particular, shared how Yamamoto let him curate an afterparty while studying at Parsons.

Yamamoto is survived by his daughter, Mirai.