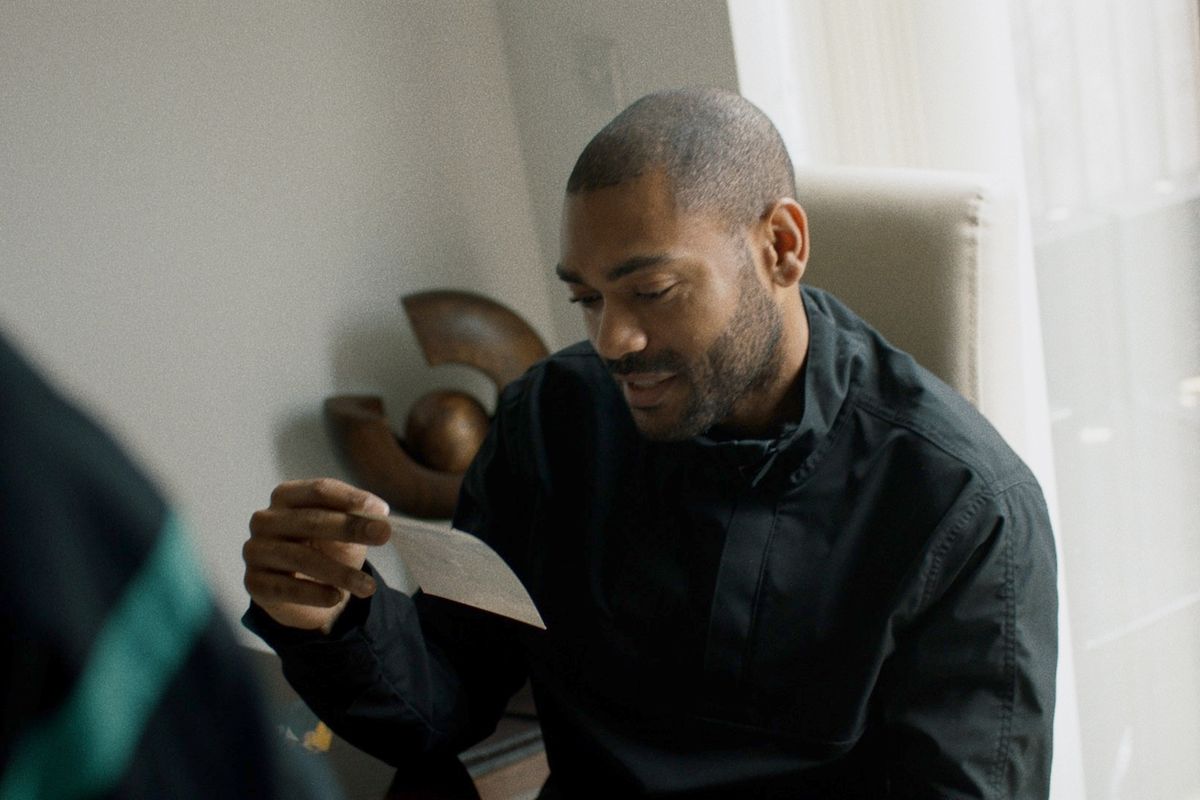 Kano Talks Us Through 'Hoodies All Summer'

On the Kojo Funds-assisted track "Pan-Fried," Kano takes a stab at rapping over a warped vocal sample, pitched up to a whine then tuned back down again. He's direct, as usual: "The whole hood got love for me/ For never frontin,' no fakin,' no fuckeries/ Hail up my brothers, but they need a compass/ We're tryna navigate out of this concrete jungle." He pauses to let the sample breathe between his own breaks for air.

It's unusual for an artist of his caliber and determination to do this — truly, every second of speech time counts — but backing tracks blissfully live out their own separate lives on his latest record, Hoodies All Summer. The East London-based musician's decision is as deliberate as any of his verses.

Kano sees clearly how the new album fits in his larger discography, and career as a whole. Between filming a third season of of his critically-acclaimed Netflix show Top Boy, to touring the world with his previous album, Made in the Manor, he's had enough time off to reflect on what he wanted his new music to represent. Essentially, he's decided to save his lyrics for the people, rather than rap about personal experiences. "Maybe this album is about us as a community and about what I see happening," he tells PAPER, "versus just all about me."

Read his full interview below, and watch the new visual for his track "Can't Hold We Down (feat. Popcaan)."

I was really excited about Hoodies All Summer. There was a bit of a wait since the last record, but the payoff was worth it.

I know the fans wait, but it's also that wait for the artists as well! We want the album to come out soon too, we want an album out every year and whatever, but it's just not for me and the way I make music. I like to dig deep and reveal stories and all that is just not possible to do every year. The living in between albums is so important to the product, you know. I made the album with two guys, Blue May and Jodi Milliner, they're both in the band with me. So while we was on the road, we was always talking about it.

Were you producing even while you were on the road?

No, no. We wasn't doing that. But we were just talking about things and music and musical directions and things like that. Nothing topical, not lyrics. So when we got off the road we got in the studio and the aim was to you know, take that energy off the road and go into the studio and make music. But we just ended up discussing a lot, you know, it's like we kind of built a picture in our heads before actually being able to paint that picture. So I'm talking like, three years ago probably, that's when I actually started that process, but it was a long process and it was a bit on and off. We started to produce music that I was excited about, but then the challenge was, "What do I say?" I didn't know what to say. The last album was so revealing — the personal, personal stories. I was like, "I didn't know where else to go." And I realized that maybe I just need to turn the lens around, and maybe it's not about me this album. Maybe this album is about us as a community and about what I see happening, versus just all about me. Do you know what I mean? So that probably happened a year into the process and things started to flow from then.

Did you think visually when you were doing it? You're talking right now about like painting this picture and building this world out that you see in front of you.

That's more like the musical landscape. But while we was making "Trouble," that was when I started thinking visually and the idea for that short film came about. And that would just get developed in conversation, you know, as time went on as we was making this record. After finishing the album, we just won an award yesterday. Aye! But then I went to finish off Top Boy. So I had a break in the album, went to finish off Top Boy and the last three episodes. Then I thought, why not? So, yeah, I'll say like, the last eight months or so of finishing the record, I was starting to think visually as well.

One thing that I concentrate on a lot when listening to movie soundtracks is the physical piano scoring. I find that an actual grand piano sound is missing in a lot of albums released over the past few years. That's like, a real huge theme of Hoodies All Summer.

Yeah, we use an upright piano. To me the piano is, musically, the backbone of the album. The last album was brass, in the way that strings are on this one. But that piano is just — you know, it is the backbone of the album, and everything grows from it. You can take it in so many places and so much rhythm can be created through the piano just in terms of the way you play it, and we've done that. Because we used piano quite often, we started to record it in different ways. Whether you're close to the mic, or whether you might get a bit further away for more ambience, or we would record piano into the iPhone and then bounce it back into the thing. So it's got a little bit of crunch to it. The U 87, it's like the old school mic, like proper proper shit, and we're like recording it into the thing, and bouncing that back into it. Sometimes, we'd bounce the piano into the MPC and put them on pads and then actually play the pad.

Exactly, sampling yourself, to create that specific sound. Then, sometimes it's just on a piano.

I also wanted to talk about the vocal sampling. It's under "Pan-Fried" as well. There's that vocal sample under your verses. Who is that? What is that sample?

That was actually from a previous session of Blue May's. It's basically a choir singing something, and we just chopped the words and used it. Sampling something originally, the song wasn't even out. You know what I mean? Like, Blue worked on the song that never made it out, and then we sampled that.

Related | Who the F**k Is Lewis Capaldi?

That shuffling beat, too...

Yeah. The sound on "Pan-Fried," like you get the hip hop in there, you get that dance hall and that kind of Afro beat thing to it. And then it's the split-up vocal, and to me, that's London. That's London. That melting pot. That kind of, you know, that crossover of culture. So that's what I like my music to represent, where I'm from. That's just also like my dance hall roots, like where I'm from from.

Is that kind of origin story what you wanted for this album?

It's like I wanted the music to tell the story of my life, while the lyrics were telling a story of our lives. You know what I mean? The last album was a story of my life lyrically, because I knew this one was going to be more of an outward-looking thing. I thought, musically, it had to be my DNA.

You can even see it on the album cover, that kind of community with the people standing.

And I'm not on it. It's not about me. It's a community, it's togetherness.

What was the idea to bring that all together?

For the cover, we had done a massive shoot for the cover and literally on a day that it was supposed to go live, I was like, "Urgh, shit. I don't know." Like I confirm the cover and everything, then I was like, "I don't know man. I just got the feeling that it's not the one." That was another photo that was taken from the date. You know, there were kids out playing in the morning, and that was a photo taken from that day and I just looked at it and thought, "That's the cover." Though, we didn't plan for that.

I haven't seen the physical CD.

Yeah, so the physical artwork is the slip cases, like how you see on digital. The kids. And then the pull-out on the actual cover is a young teenager that has been stabbed and is on the floor, and that took inspiration from "Trouble," the song. To me that was like... it's uncomfortable. It's that uncomfortable truth that this is what's happening out there and we see it on the news, someone just flashes up a picture of some kid that's just lost his life or whatnot. Or we see names just along the bottom of the page and we forget that name within five minutes. We care for a second then we don't care anymore. But there's something about seeing it that you can't unsee it. Once you've seen it, you can't unsee it. And I just wanted to make that statement, you know, this is what we should be caring about. Like look what's happening on our streets. So that was was behind the physical cover.

It's kind of poetic to have the very cover be something more community-based, and then you have the pull-out right behind it be something as striking as that.

Those kids are around ten years old, and then the teenager lost his life at fourteen. So it's like, within such a short span of time, this is how things can turn. It's like one minute it's cool when you're out there and eating ice creams and playing on the street and it's just that crucial couple years where things can take a turn. That's what we're living amongst in London. A lot of people just going about their days and they don't even know what's going on around the corner. So when you see it, it's shocking, enlightening, and it's something we got to talk about, something we've got to deal with.

You have a line that's really poignant on this album. It's about the hook, it being the hook you can retire after. Is that in "SYM"?

It's funny you say that, 'cause I do think about that sometimes. I think about, "If this was the last song I made, or last album I made, not would I be happy, but would I be content?" I think if more people felt like that maybe they'd make music that is more important. That's why I just couldn't release like a bunch of club tunes in such a critical time. It's not important enough. There's definitely room for that art, to give us all just relief, you know go to the club and let your hair down and what. That's great and that's necessary, but that's not the test-of-time shit. You know what I mean? So it is something I think about. Yeah, I'm sure I'll make more music. But hopefully when it comes to that day when I don't make music anymore, I could stand by my body of work and say, "You know what, I made some important shit and I'm proud of what I've made."