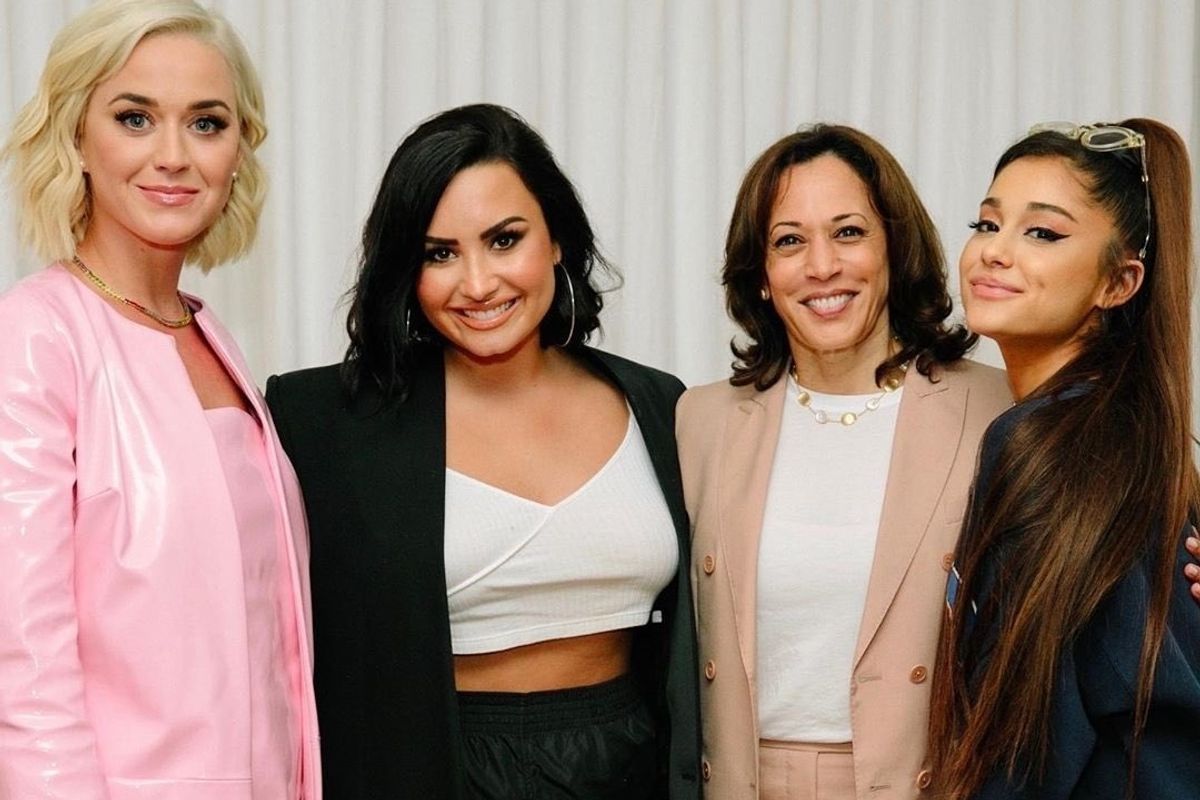 Your favorite pop star has probably already taken a side in the civil war between Taylor Swift and superstar manager Scooter Braun that's currently blazing through Hollywood. Justin and Hailey Bieber, Demi Lovato, Sia and Ty Dolla $ign are all shilling for Braun, while Halsey, Brendan Urie, Kelly Clarkson, Cher, Iggy Azealia, Sky Ferreira and more are #StandingWithTaylor, after the debacle over Braun's ownership of Taylor's masters exploded (catch up on the feud here). Now, finally, Kamala Harris has unveiled her official platform on the matter!

The California senator spoke at a star-studded fundraiser hosted by Braun and his wife Yael at their LA mansion this weekend, at a little gathering they called "Fireside Chat with Kamala," which Bloomberg reporter Jennifer Epstein acquired the invite for.

Braun posted photos of himself and Harris sitting panel-style in his backyard last night. "Such as incredible night of supporting our brilliant friend...candidate for President of the United States of America @KamalaHarris," he wrote on Insta.

Scooter Braun on Instagram: “Such an incredible night supporting our brilliant friend... candidate for President of the United States of America @KamalaHarris 🇺🇸”

It's possible that Harris had no idea that her innocent attempt to woo celebrity endorsements come 2020 and snag some Hollywood dollars for her campaign would mean turning the Democratic primary into a celebrity feud. It's not the first time she's done events like this with LA elite: J.J. Abrams and Shonda Rhimes recently hosted a fundraiser for the California senator at Abrams' home in March.

But, whether or not Harris factored in the beef to her strategy, she's definitely lost the Swiftie votes (which it's possible there's actually quite a few of to be won, now that Taylor has embraced politics after staying silent in the 2016 election). The stans came straight for her jugular as soon as the photos went live, vowing they wouldn't vote for someone who associates with their leader's new nemesis.

"I was SO excited for you as a democratic candidate, but if you so choose to go to an event held by @scotoerbraun, a man whose arrogance mirrors our president's, I can no long hold onto my excitement and faith for you as a presidential candidate @KamalaHarris #disappointed" wrote one Swiftie, per the Daily Mail, which documented the ensuing Tweet storm.

Another read: "@KamalaHarris please don't do a fundraiser with @scooterbraun you will lose a lot of votes to @ewarren I want to support you but cannot if you associate with a bully and a misogynist #IStandWithTaylor."

Perhaps being blacklisted by the Swift community is simply a trade-off for the new celebrity pals she made. It turns out, according to photos circulating online, Ariana Grande, Demi Lovato (who are clients of Braun) and Katy Perry all attended the fundraiser as well.

Scooter shared a photo of himself with his clients, Demi and Ari, at the event as well. Ari has stayed neutral in her manager's feud with Taylor, while Demi came out right away for Braun, writing on Instagram, "I have dealt with bad people in the industry and Scooter is not one of them."

The photo thickens the plot in its own right, considering that Katy originally spoke out against Braun on Taylor's behalf in the feud, following their reconciliation. After the Tumblr post went up, Katy wrote, "I stand with Taylor. Stay strong my friend," online, and publicly signed a petition that Taylor's fans have started for her to re-record her albums so that she can own the new masters.

Yikes. Could Kamala Harris ruin Taylor and Katy's newfound friendship? Could Swifties change the course of the 2020 Democratic primary? As the cinematic universe of this beef continues to expand faster than Marvel's, anything seems possible.