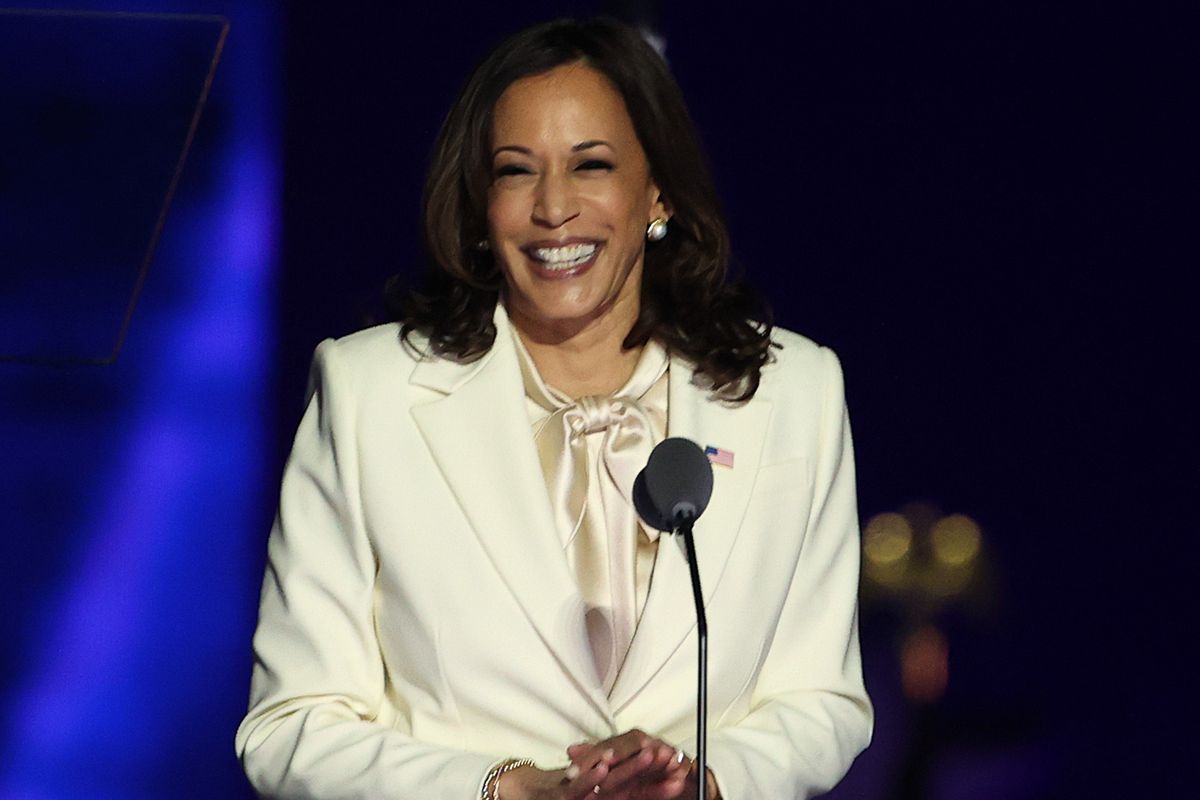 "To be or not to be" has been dethroned as thee preeminent question of the day in favor of more pressing matters: to talk or not to talk about Vice President-elect Kamala Harris' wardrobe?

On the campaign trail, there was little discussion about Harris' fashion choices, mainly because she gave little to talk about. "Why head-to-toe black was the only choice for Kamala Harris' debate outfit," one headline reached. While Town & Country's Chloe Foussianes argued that "the vice presidential candidate's outfits present little to read into, rejecting the obligation placed on women politicians to speak with their clothing." The one big sartorial brouhaha which elicited polarizing responses ranging from "werq" to "really?" came after Harris stepped off a plane to tour the scene of a devastating Fresno, California wildfire wearing Timberland boots.

i want to understand the mind of a person who legitimately gets excited seeing kamala harris wearing timbs or chucks. what happens there?
— hasanabi (@hasanabi)1600235007.0

Then came Harris' victory speech on November 7. Pulitzer Prize-winning Washington Post senior critic-at-large Robin Givhan paid little attention to Harris' outfit, paying more mind to the monumental nature of the moment. "Harris stood onstage outside the Chase Center in Wilmington, Del., in her white pantsuit — with all of its connections to the women's suffrage movement — with an American flag pinned to her lapel, and the moment was exquisite," she wrote. "Black women, White women, young women, old women, little girls all bounced in the parking lot, cheering, weeping."

The New York Times's Vanessa Friedman was more forthright in her story, headlined "Kamala Harris in a White Suit, Dressing for History." Friedman found a lot of meaning in Harris' silk Carolina Herrera white pantsuit. "The pussy-bow blouse: the quintessential working woman's uniform in the years when they began to flood into the professional sphere; the female version of the tie; the power accessory of Margaret Thatcher, the first female British prime minister," she wrote. "And then, suddenly, a potentially subversive double entendre in the hands of Melania Trump, who wore a pussy-bow blouse after her husband's "grab 'em by the pussy" scandal."

"There is no doubt that, as seen in her victory-speech style, Vice President-elect Harris is a part of the next chapter in fashion's evolving role as a messaging canvas in politics," added fashion historian Darnell-Jamal Lisby in an op-ed for Teen Vogue, highlighting the significance of Harris' silhouette, the color white, the pearls and her coiffed hair.

In these examples, you have three career fashion critics and historians dissecting and inferring meaning as their jobs require. But when Congresswoman Alexandria Ocasio-Cortez did a recent cover shoot for Vanity Fair, some right-wing pundits and politicians seized on the opportunity to criticize her borrowed wardrobe.

"AOC appears in Vanity Fair in outfits worth $14,000 to curse out Trump," wrote a F*x News headline shared on Twitter by L*ura Ingr*ham. "How many of our voters owns a $14k outfit? @AOC has fallen into the #Swamp #hypocrisy," tweeted David Dudenhoefer, who failed to defeat incumbent congresswoman Rashida Talib in Michigan's 13th Congressional district by receiving a paltry 18.8% of the votes. "I wonder what brand of socialism allows you to get a $14,000 suit for Vogue photoshoots," tweeted Congresswoman-elect Lauren Boebert. "See you soon, Alexandria. Looking forward to dismantling your socialist agenda in my finest Macy's clothes like normal working people."

AOC, never easily baited, fired back with succinct precision: "The whole 'she wore clothes in a magazine, let's pretend they're hers' gimmick is the classic Republican strategy of 'let's willfully act stupid, and if the public doesn't take our performative stupidity seriously then we'll claim bias.' GOP, get yourselves together. It's sad."

Harris will without question face similar baseless attacks from across the aisle, so the question really becomes whether or not she'll choose to give them something to talk about vis-à-vis her wardrobe. That Carolina Herrera suit discourse is good for one news cycle, but if she steps out in similar looks moving forward, the conversation may be moot. That, in itself, could be a shrewd move on Harris' part, in not giving anyone on either side of politics anything to talk about or criticize. But all of this is discounting the idea that Harris herself, like many if not all women in public office, is not green to this sort of highly-gendered discourse.

"Women running for office obviously have to deal with a whole other level of scrutiny when it comes to what we wear and how we present ourselves," says Eliza Orlins, a Manhattan public defender and current candidate for Manhattan District Attorney. "It's a reality I'm already familiar with from my career as a public defender. As a woman representing clients in court, you're constantly aware of how you're presenting yourself, knowing anything you wear — down to your nail polish color — has the potential to rub a juror the wrong way or otherwise detract from an argument you're trying to make. It's unfortunate, but it's the reality (at least for now) — and as an attorney, it's something Kamala Harris has had to think about for decades, since before she ran for office."

Some, like Representative elect-Cori Bush are candid and open about their experiences dressing for the job. "The reality of being a regular person going to Congress is that it's really expensive to get the business clothes I need for the Hill. So I'm going thrift shopping tomorrow," The Congresswomen-elect tweeted on November 11.

"Thrifting, renting, and patience as you get your closet together sis. Capsule wardrobe will be your best friend. @AyannaPressley has the accessory game down," Ocasio-Cortez replied. "Good news is that all these practices are very sustainable and good for the planet!"

"Cori, I still wear some of my maternity clothes under those blazers," followed by the emoji of a woman shrugging," wrote Congresswoman Rashida Talib in response. "P.S. I get the most compliments from the clothes I got from thrift shops."

They are far from the only ones who resonated with Bush's candidness. "Of course, building a professional wardrobe knowing you're going to be under that kind of scrutiny is a whole other challenge women have to deal with that men don't have to face — and it becomes another barrier for women wanting to run for office and enter the legal profession," says Orlins. "What I think is really remarkable about this moment in time is that younger women not only have all of these incredible women like Stacey Abrams and Kamala Harris to look up to, but they now also have all of these great examples of women (like AOC) who are openly talking about how they've dealt with this challenge and how they've done it in an affordable, accessible, sustainable way."

Of course we're going to be talking about Kamala Harris' wardrobe over the next four years. Will we get offshoots of Vogue's How to Wear Hillary Clinton Pantsuits for Harris? Maybe we've moved past that, and will see the female politician's pantsuit as utilitarian as the suits worn by male politicians like Reverend Raphael Warnock and John Osoff.

But perhaps the bigger conversation beginning to take shape is happening around the next generation of female politicians taking office, turning looks and stunning pretty, both unafraid and unbothered by bird chirp-like critics and willing to talk about fashion through a prism that's less Oscar de la Renta evening gown and more Rent-The-Runway.

After all, as Cori Bush put it best in a tweet: "Thrifted IS congressional."