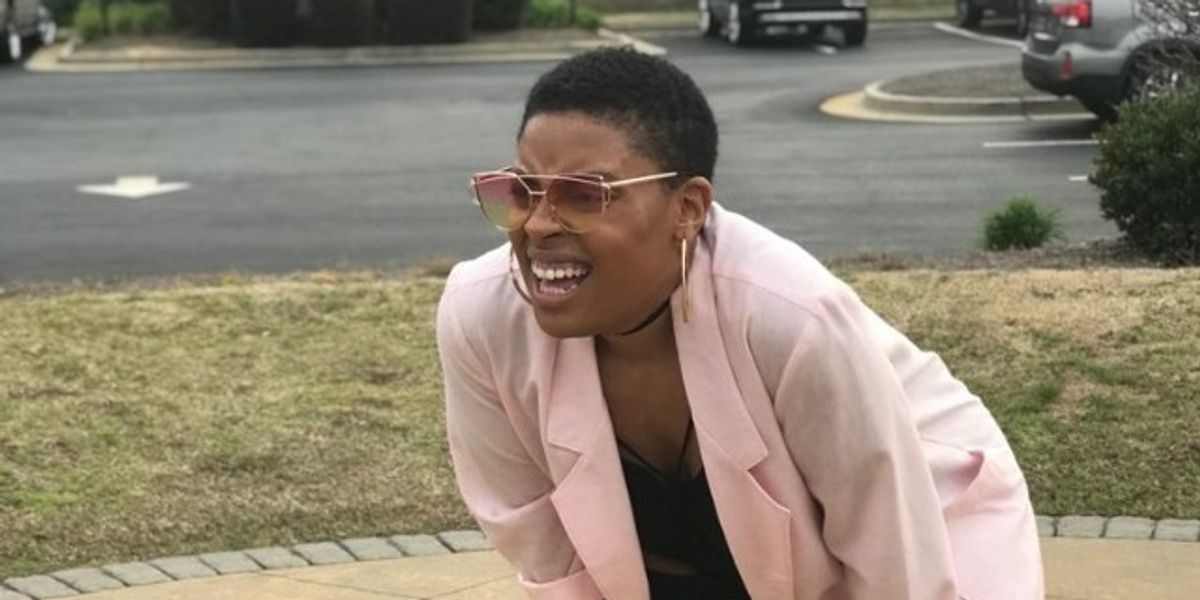 2018 has gifted us some truly outstanding memes thus far, and it's only April. Snorting condoms and the petty cheerleader will go down as some of the best content in a year marked by constant existential anger, but the squatting girl meme is hashtag hella relatable. In the viral photo, a woman is wearing a seriously fly look, with lucite heels and a millennial pink jacket, except she's squatting with her arms on her knees and a priceless, bewildered facial expression. Naturally, the internet loved it.

Vibe reports that the star of the meme is a woman named Kalin Elisa. The photo blew up after she posted it with the caption "When your knees are crying after you've squatted for the gram." Elisa told the Daily Dot that that she is embracing her new meme status. "If you ask any of my friends, I'm as goofy as they come," she said. "So to see my picture used to illustrate so many hilarious situations has been the absolute greatest."

It's clear that Elisa is enjoying it just as much as the rest of us. Elisa has been gamely retweeting some of her favorite jokes on her own timeline; she even took time to address her glow-up. "LMAO!! I do know this. I just don't know where all I've spread to now," she said in a reply to someone asking if she knows that she's a meme. She also responded to a fan thanking her for being, well, herself, writing "You're so welcome !!! My goal is life to put as many smiles on as many faces as I can before I leave this earth. This has been a treat for my soul!"

It's a been a real treat for all of us, too. Lord knows we've needed it after this crazy year. Below, some of our favorite Kalin Elisa memes. Bookmark and send us your own.

When your knees are crying after you've squatted for the gram 😂😂😂 pic.twitter.com/vrkXszRkI2
— SheaButtaBaby (@Solo_Kalin) March 20, 2018

When the card decline in the ATM and you got a friend in the car so you gotta act like you don't know why.
Receipt Balance: $0.09 @Solo_Kalin pic.twitter.com/shKN6JzcaZ
— Petty La Pew (@BingNiceNEZ) April 4, 2018

When a period cramp hits you out of no where pic.twitter.com/aElwr6cogL
— CERAADI (@Ceraadi) March 29, 2018

Parking in DC and NY will have you getting out the car like pic.twitter.com/fcEzeHx38V
— Reggie (@UrFavorite_Ex) March 26, 2018