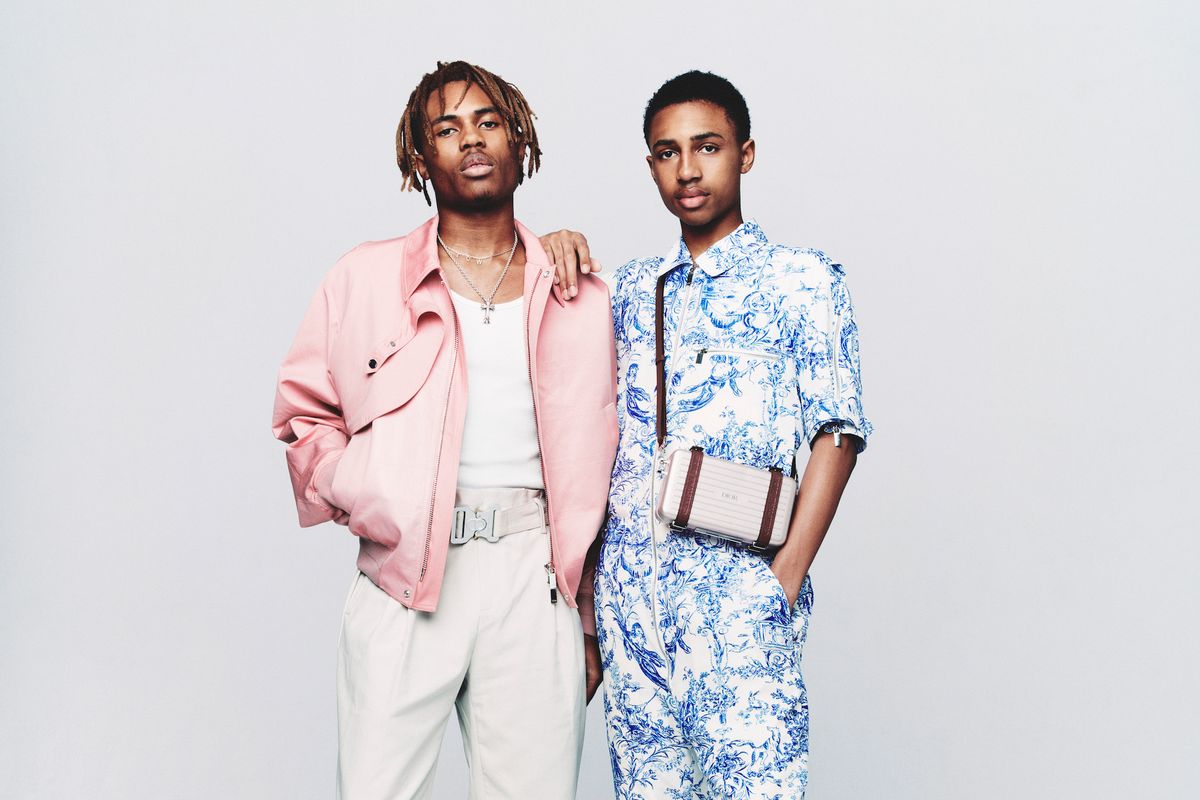 There's never been a better time to be the child of celebrity parents. Kylie Jenner reached billionaire status last year. The Hadids continue to appear on runways all over the world. Chet Hanks is almost at 300 thousand followers on Instagram.

Gone are the days of reality TV or a high-profile arrest being the most viable path to notoriety for celebrity spawn. Forging your own identity — outside the shadow of your parents' fame — has never been easier, thanks to the internet. But just because it's easier, doesn't mean that every celebrity's kid is doing something worth paying attention to. Reaching that level of ubiquity, where your work speaks before your parental lineage does (think Tracee Ellis Ross, Angelina Jolie or Gwyneth Paltrow) takes work.

For Kailand and Mandla Morris, it takes more than most. Excellence sort of runs in their DNA. They're the teenage sons of Designer Kai Millard Morris, who has designed garments for people like Michelle Obama, and renowned music legend Stevie Wonder. With such enormous shoes to fill, meeker kids would run the opposite direction of their parents' respective fields, but the 18 and 14 year olds are anything but timid.

Both are still in high school. A quick scroll through their Instagrams and it's not hard to imagine developing an inferiority complex from sitting next to them in math class. They both exhibit the kind of nonchalant coolness that's really hard to nail if you're trying to. And their friends — people like Shawn Wayans' daughter Illia, actor Rio Thake and Maddie Ziegler, dancer and Sia's former muse — look way more interesting than you should be allowed to before going to college. (And they all have more followers than I ever will.)

But that's not to say their ambitions are superficial, even if they're constantly shifting, the way they do when you're 18 and 14. Kailand and Mandla are both determined to be successful on their own merits, even if they're still figuring out which path to go down.

Kailand, who's walked the runway for houses like Pyer Moss, knows he wants to be in the fashion world, but he's still learning where he fits. "I've been around fashion my whole life, since I was a little baby," he tells PAPER. "I was always attending shows, and going backstage." His love of fashion is something he credits to his mother, but he's eager to assert his own tastes too. "I'm still developing my own voice," he says.

He's using it to explore a passion for designing, launching an upcoming unisex line, KOM. And he's gaining important industry knowledge and powerful mentors. He landed an internship under Kim Jones, the creative director of Dior Homme, describing it as a "surreal" experience. "I'm surrounded by a lot of the creatives on the Dior team," he explains. "And [Kim] pushes me to do my best."

For Mandla, fashion is definitely compelling (Kailand and Mandla couldn't give a concrete answer on which brother steals the other's clothes more), but he gets his main thrills from performing. He's no stranger to the stage and screen, having competed on the Juniors season of Dancing with the Stars in 2018 and placing fifth. He even had a cameo in A Star Is Born. But his true passion is music. "Music has always been there for me," he says. "Watching my dad play the piano at home, or seeing him on tour or in the studio. I've always had a love for it."

Mandla is regularly in the studio working on his music, which he describes as R&B and soul-influenced. He cites artists like Frank Ocean, Lauryn Hill, Nina Simone and — naturally — his dad as influences. "I love listening to soul. I love listening to hip-hop," he says. "But in order to really know your music, you have to study not just what you like but different genres, as well." He's currently working on his first solo album, and he tells me he sees himself performing at Coachella one day.

When I ask Kailand where he sees himself in a couple years, he jokes that he'll be "on top of the world." Considering where he and his brother are at, at their modest ages, I might just hold him to it.