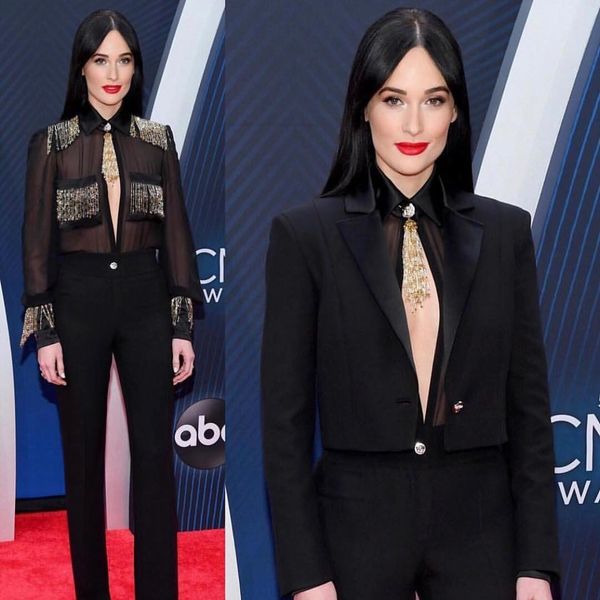 Kacey Musgraves became only the sixth woman to win the CMA Album of the Year Award this week, and she did so wearing Versace. The singer, whose fourth album Golden Hour has received little country radio station play and was going up against the likes of Keith Urban and Chris Stapleton, shared images of her sleek black suit with fans on Twitter late last night.

Musgraves' outfit epitomized everything that makes her music so great: it paid tribute to the past while staying true to the present. Even the future. A standout track from Golden Hour is titled "Space Cowboy," and this is what one of those might look like. Versace has carefully updated a classic Western silhouette, complete with Swarovski fringing and a cropped bolero jacket. The see-through blouse and glittery bolo tie are what make it 2018. Nobody ever dresses like this at the CMAs. Ever. But Musgraves went there.

She might not have been a mainstream choice — most popular country artists are middle aged dudes singing about cars, not 20-something women singing about smoking weed on the porch — but many at the CMAs seemed happy to see Musgraves win Album of the Year. Presenting her with the award, Karen Fairchild from the group Big Little Town smiled and noted that her victory went out "to all the little girls writing songs out there."

You can watch a clip of Musgraves performing the track "Slow Burn" at the CMAs here.