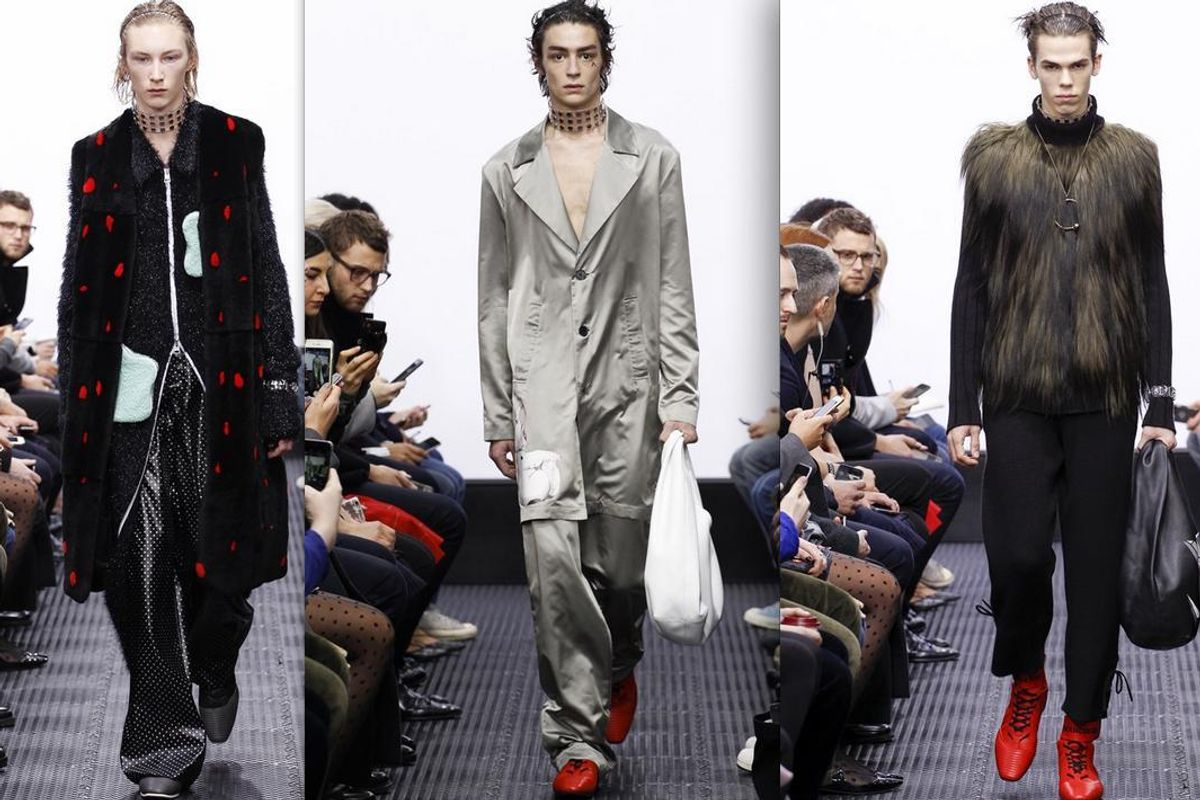 A look at the designer's recent collection, as live-streamed on Grindr.

Immediacy, clarity, desire: three words that fashion is struggling with at the moment. The industry moves too slow or too fast depending on who you ask. The messages are mixed with branding noise and social media. And who wants to buy anything when it won't be available for months after it's sent down the runway? By contrast, the ubiquitous gay hook-up app Grindr is all three, engineered to organize the people (mostly cis gay men) in your relative radius by who they are and what they want. It is truly a wonder if not a startling feat of Orwellian efficiency. So it was with not the least bit of curiosity I welcomed the announcement last week that white-hot London designer J.W. Anderson would be 'live-streaming' his menswear show on Sunday (10am GMT, 5am EST) via the app. How would it go and more importantly, what was he saying?


Technically, the livestream was offered via a link that appeared upon opening the app, briefly obscuring the usual grid of percolating profiles of torsos and selfies, that led you to a video feed from the show venue in London. Watching from New York, my first instinct was that any unwitting Grindr user who clicked (perhaps in a wee hours come-down) would then have to spend another 20 or 30 minutes, the standard delay for runway shows, watching publicists fill seats and the fashion flock glad handing before the show began. And that even the most patient grind-ee (there are reportedly 7 million users in total and 1 million logged on at any given time) would not sit around and wait. But no. At about 2 minutes past the appointed hour, jarringly prompt for a fashion show and before many had taken their seats, Michel Gaubert's pulsing techno beat alighted and the first model stomped out. The collection that followed was Anderson's signature mix of bizarre and banal: fluorescent snail prints, ermine collars, lurid cartoon illustrations, quirky knits. But the message was really the medium -- or, rather, the positioning.

To situate his brand and its primary communication (the fashion show) with Grindr was both a stroke of uncanny instinct and characteristic strangeness that has brought the designer to the forefront of the industry in the last half decade. Coupling the vernacular of high fashion esoterica with the carnal aims of Grindr is a spirited juxtaposition in a time when most in fashion talk of drudgery, exhaustion, and disinterest. While the rest of the industry slouches toward mayhem, Anderson offers not so much a solution to the problem of speed and an over-wrought system but a redirection, a new way of experiencing fashion 'time' and the organization of the people and desires around you. There is an ease the Grindr generation has with sex, and without the anxious taboos and fetishizing of its elders it is free to know what it wants and find it. Instinct rules and should it not be the same for fashion? How Anderson subsumes the culture around him was never more apparent than this weekend. By not letting the snobbishness and moralizing of fashion's forbears interrupt his feed, he was able to immediately and cleverly ask his users, "into?"