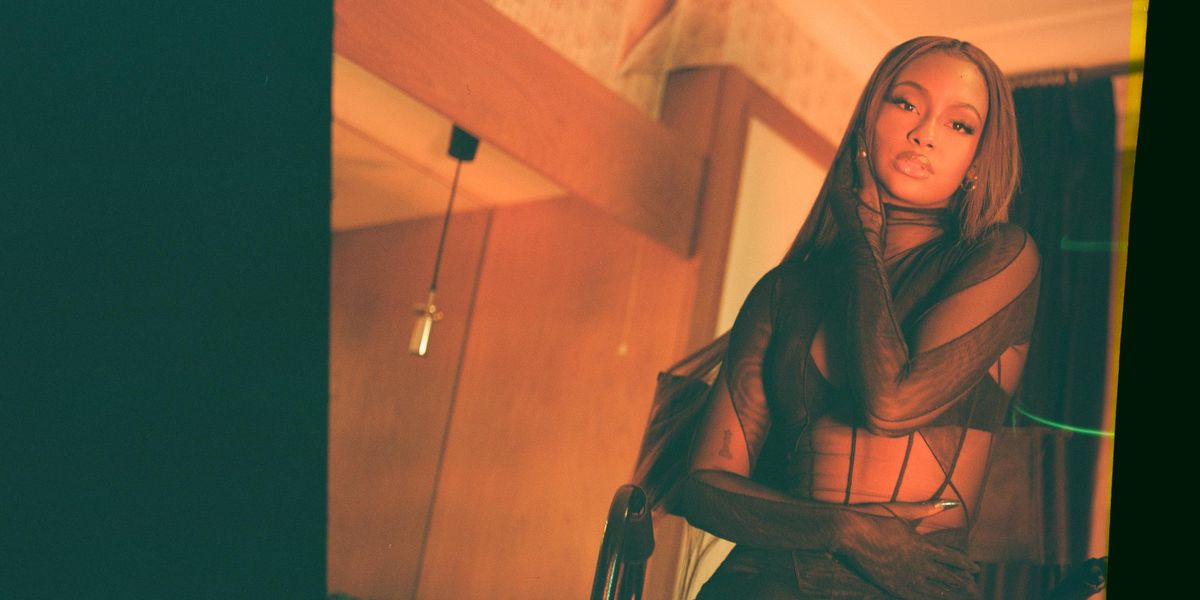 This month, the 25-year-old singer released an against-type single, "Intruded," that sounds like the kind of sex jam Missy Elliott would slide into and fog the windows even more. Along with it came an even sexier video that shows how narcissistic we all are, desperate to be surrounded by cameras. Through it all, Skye boldly embraces this new sound and evolved image that signals the start of an exciting and unpredictable, new era.

Related | Saweetie and Timbaland Are Taking on 2021

After two albums that delved deeply into dense languages of love, Skye is shedding the past and manifesting a new direction. The world will see the result of that when she releases her third studio album, Space & Time, that'll be entirely produced by Timbaland. Their relationship kicked off with a beat sent via text and, before they knew it, they were in the midst of creating something special.

"I learned a lot from him during that time and it was such an experience to be getting all these musical and personal gems from such a legend," Skye says. "The synergy was super natural."

Below, PAPER goes behind the scenes of Skye's "Intruded" video with Timbaland, out now.

How did "Intruded" come about with Timbaland?

I've always wanted to work with him. When I expressed that to my team, E&E Creative, they were already on it. They'd worked with Timbaland before and already started the conversation. When the pandemic hit, my spring tour was canceled so I was looking for other ways to put out content and express myself.

I did a side-by-side cover video with my friend on Instagram and Tim reached out via DM when he saw it. He told me he wanted to do a video, too, and I was shook. He sent over a beat to me, which I couldn't believe that The Timbaland just casually FaceTimed and texted me a beat. I immediately started writing to it and, boom, "Intruded" was born.

I was so nervous the first day we got in because it was the first time that we had met in person. We'd been talking to each other for a couple months via FaceTime, doing these Space & Time Sessions, but now it was all too real. After the first 30 minutes or so, I started to chill out. We got straight to work and we had no time to waste. I learned a lot from him during that time, and it was such an experience to be getting all these musical and personal gems from such a legend. The synergy was super natural.

What was the creative process for the music video?

The creative process was super personal and hands-on. My creative team pulled together some references from an early 2000s Steven Meisel shoot and we expanded from that point. They had a concept about technology, and the fact that Timbaland and I had been creating via FaceTime before ever meeting in person.

We then talked about the idea of forming connections through FaceTime, but how often you're actually looking at yourself instead of the person on the call. It became an idea around how technology can make you self-consumed and obsessed. We had found this sick director, Nina Holmgren, who had created a short film we absolutely loved, so we knew she'd be able to bring the vision to life. And she absolutely killed it.

What else can we expect from your forthcoming album with Timbaland?

Straight heat! I've never been more proud of something in my entire life. We've worked so hard on this project and it shows. It's the perfect amount of music and vibe for you to want to run it back over and over.

It's a new year for you with a new era. What are you looking to accomplish in 2021?

My goal is to bust through all of the doors that I always walked by, but never felt the confidence to kick down. I stand so strong behind this body of work and what's to come after. I know these doors will be wide open for the next project.

What would you call this new chapter in your career?

"She's Arrived." I open the album with an interlude where I sing, "Where have you been, how did you get in," and that's my subconscious talking to me and addressing the fact that I'm finally present.

Stream "Intruded" by Justine Skye and Timbaland, below.