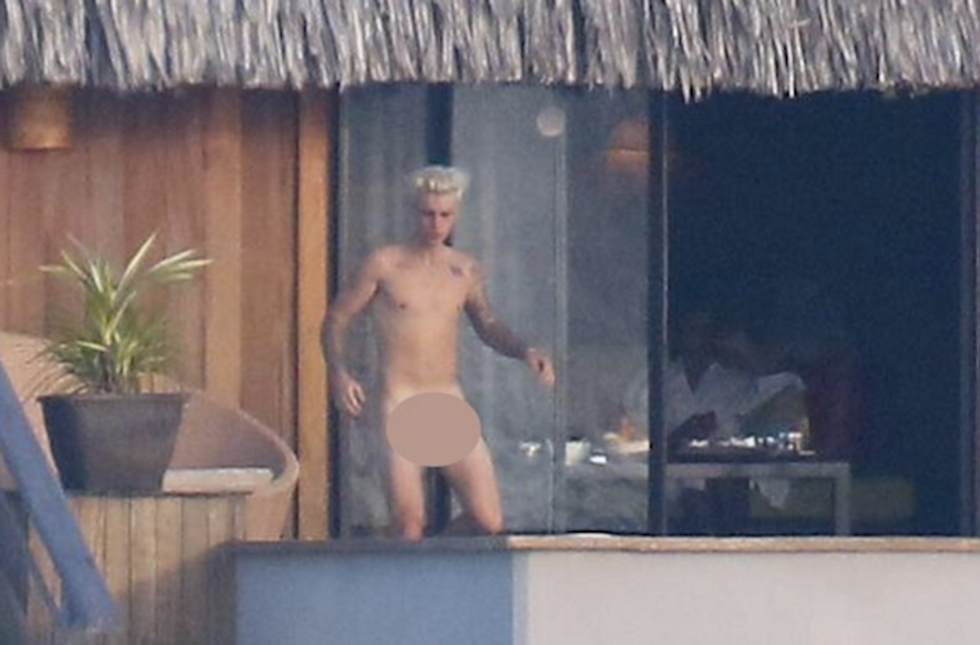 by Carey O'Donnell
PAPERMAG
Justin Bieber gave Access Hollywood his two cents on the now legendary nude pics of him frolicking on his private dock in Bora Bora earlier this month with his rumored lady, Jayde Pierce, and also his humongous dick.
Biebz made a rare appearance on the TV show, to accept Access Hollywood's esteemed honor of "Artist of the Month," but of course, had to talk #dickgate.
According to Bieber, the photos were taken "without' his knowledge, and he is NOT pleased.
He, like, very, like articulately expressed his feelings to host Billy Bush:
"My first thing was like...how can they do this? Like, I feel super violated. Like, I feel like I can't step outside and feel like I can go outside naked. Like, you should feel comfortable in your own space... especially that far away."
In true Bieber fashion, however, any shred of vulnerability was outweighed by some major frat boy douchery.
"That was shrinkage for me," he told Kennedy.
Hell yeah, bro.
Last night, a song called "Stronger," featuring Bieber and his clandestine love, Selena Gomez, leaked; can't help but wonder if all the recent Bieber/Gomez interviews about their torrid affair, and even #dickgate, were all part of one seedy promo scheme.
The song was immediately pulled from the web, but enough to send fans everywhere into a tizzy.
Blerrrrrrrrrp.