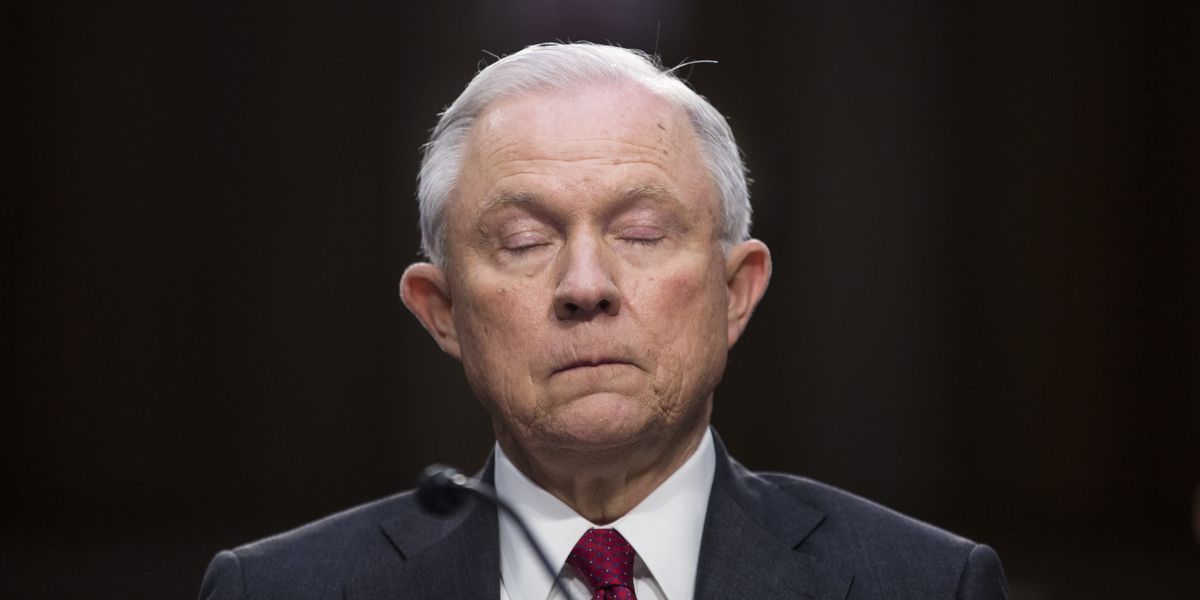 The Department of Justice has argued that the groundbreaking Civil Rights Act of 1964 does not legally protect people from discrimination based on sexual orientation. Although politicians and activist groups have deemed this political stance as "shameful," the argument comes as no surprise considering it is being lead by Attorney General Jeff Sessions, who has a history of supporting anti-LGBT groups and actions.

Lawyers for the DOJ submitted an amicus brief to an appeals court that outlines their reasons for believing that the Act — which protects from discrimination based on race, sex, color, religion, and national origin — does not apply to gay people. "It does not, as has been settled for decades," it says. "Any efforts to amend Title VII's scope should be directed to Congress rather than the courts. The essential element of sex discrimination under Title VII is that employees of one sex must be treated worse than similarly situated employees of the other sex, and sexual orientation discrimination simply does not have that effect."

In a further blow to the LGBT community, the Justice Department also argued that the Equal Employment Opportunity Commission, who determined in 2012 that transgender people were protected by the law and have attempted to prove the same for gay people, did not have the power to decide on this issue. "The EEOC is not speaking for the United States and its position about the scope of Title VII is entitled to no deference beyond its power to persuade," the brief reads.

Accordingly, activists have slammed the argument, with the American Civil Liberties Union calling it "one more gratuitous and extraordinary attack on LGBT people's civil rights." "In one fell swoop, Trump's DOJ has provided a roadmap for dismantling years of federal protections and declared that lesbian, gay, and bisexual people may no longer be protected by landmark civil rights laws such as the Fair Housing Act, Title IX, or Title VII," Sarah Warbelow, legal director for the Human Rights Campaign, said in a statement. "For over a decade, courts have determined that discrimination on the basis of LGBTQ status is unlawful discrimination under federal law."

Fortunately, in an often-cited interview with the Advocate, Donald Trump had this to say: "I like the idea of amending the 1964 Civil Rights Act to include a ban of discrimination based on sexual orientation. It would be simple. It would be straightforward." Trump supporters use this 17-year-old interview as proof of Trump's support of the LGBTQ community, his new Director of Communications included, so hopefully he stays good on his word—though his recent actions show he's not very good at that.

The ruling comes soon after Trump decided to ban openly transgender people from serving in the U.S. military. Will Sessions and company cite financial concerns for this argument as well?