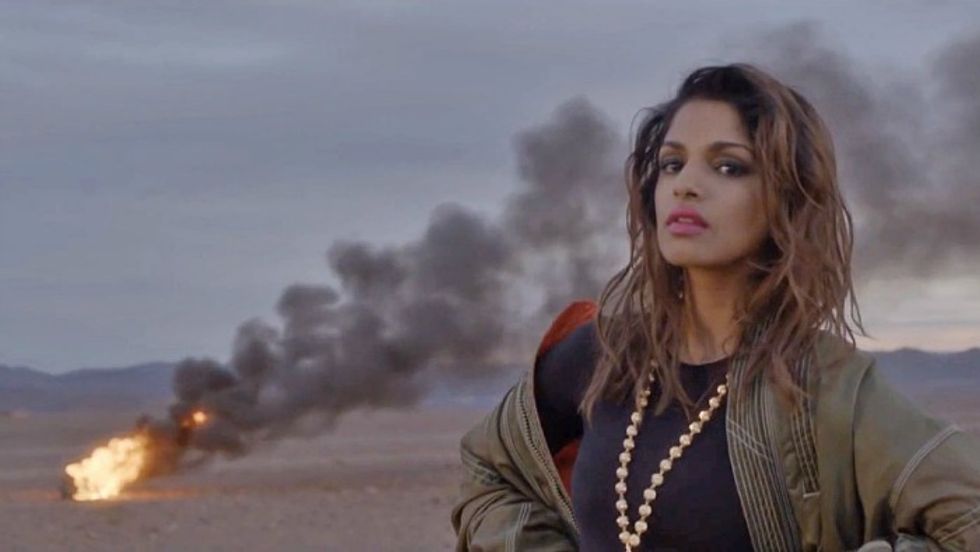 By Sandra Song
PAPERMAG
Rapper/singer M.I.A. has been accused of cultural appropriation and has taken to Twitter to talk about it.
According to initial reports, an unnamed party (which many are speculating to be her label, Interscope) is blocking the release of (what has been presumed to be) her "Platforms" video.

I wanna talk about clutrural appropriation! I've been told I can't put out a video because it's shot in Africa. Discuss

If the music industry allows an African artist to come through this year on intnl level, I would gladly give him this video for free.

From her tweets, it seems that the main issues lie within the use of an African dancer shot in the Ivory Coast, though it's really, really difficult to tell what exactly the problem is as Interscope has yet to comment on why they pulled the clip or whether the dancer had any creative agency. Plus, the official Soundcloud stream has been taken down (though it still lives on via a few low quality YouTube rips).
So what to think? After all, M.I.A. isn't exactly innocent re: cultural appropriation, seeing as how her 2012 video for "Bad Girls" garnered criticism for its token portrayal of Arab women decked with headscarves and AK-47s, as well as her penchant for penning songs that treat foreign struggles as narrative tools (i.e. "20 Dollar" about Liberia's lax gun culture). Not to mention the obvious fact that as a rapper with influences like Jamaican dancehall and London inner-city grime, she profits handsomely off of traditionally black artforms -- all while singing patronizing lines like "I put people on the map that never seen a map." After all, the undertones that belong to her general "aesthetic of the global south" is complicated to say the least, seeing as how she's basically imbued herself with the power to speak for all these cultural movements she's not a part of, but then again, what exactly does that mean for "Platforms"? Is this all just a continuation of what Ayesha A. Siddiqi argues is actually just a misunderstanding of her mission?
But seeing as how Interscope has remained silent on Madonna's appropriative use of black rights icons for the Rebel Heart promotional materials and Gwen Stefani's entire existence (from bindis to Harajuku Girls), one has to wonder how bad this video would actually have to be. After all, it's (obviously) never alright to utilize another culture for one's own purposes and one should always keep in mind that there's a stark difference between exploitation and inspiration no matter where your heritage hails from. But what exactly was so bad by Interscope's standards that the video couldn't even see the light of day? Here's to hoping the leak's around here somewhere...
You May Also Like
Internet Culture

Girl Ultra Is a Runaway Bride in 'Amores de Drogas'