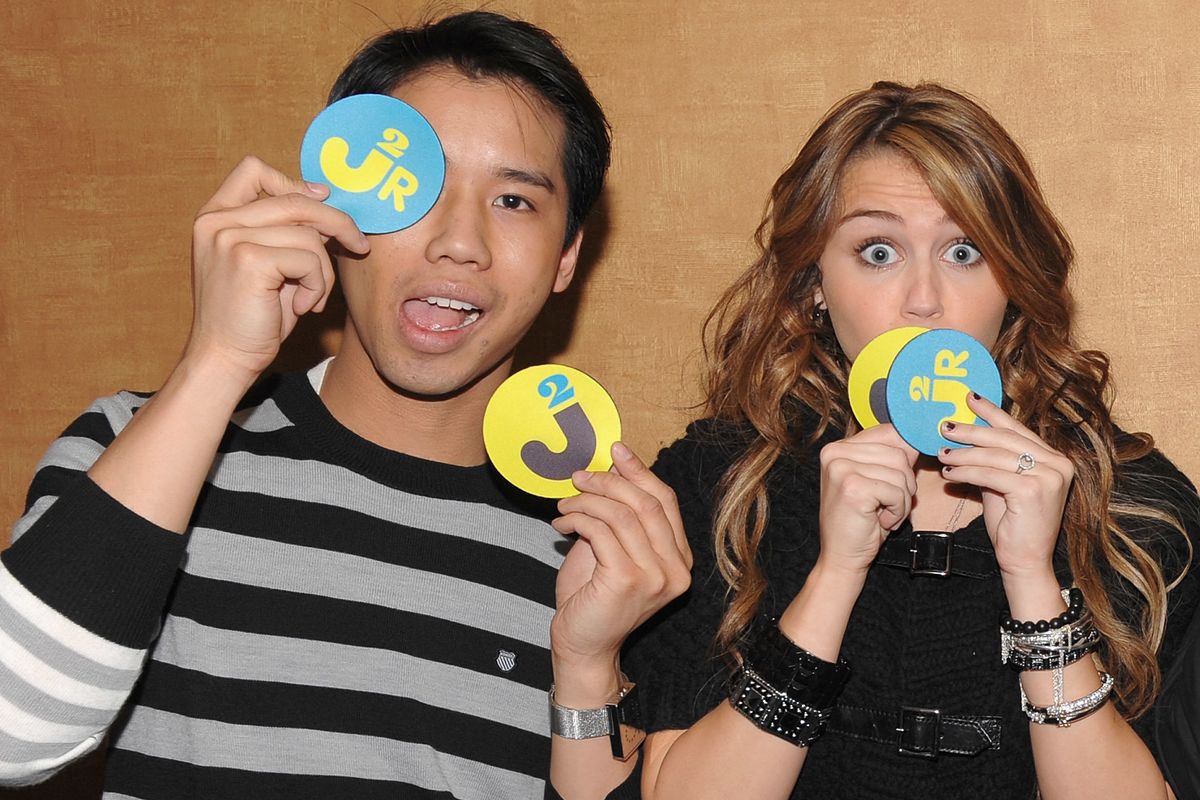 When I get Jared Eng on the phone, he's just been at lunch with Rydel Lynch. I don't immediately recognize the name, but that's just because I'm not as good at my job as he is. Lynch, if you're not aware, Lynch performs in the band R5, alongside her brother Ross, who also plays Harvey Kinkle in Netflix's The Chilling Adventures of Sabrina. The Rydels don't regularly walk red carpets, but they do have teen Instagram followers in the millions, and therefore they're regularly featured on the celebrity-focused blog Eng founded in his college dorm room 14 years ago, Just Jared.

Just Jared has kept with the times, but it's still impossible to forget that it rose to prominence during a very different era: the golden age of snarky pop culture reporting, when readers were more likely to get their celebrity news from weird Wordpresses than social media selfies. Paris Hilton was behind bars, people were either team Jen or Angelina, and Netflix was a service that shipped physical DVDs to your house. Amanda Bynes and Lindsay Lohan were going through very public breakdowns, Lady Gaga was becoming the biggest pop star in the world, and Perez Hilton was drawing penises on paparazzi shots using Microsoft Paint. Furiously typing bloggers would churn out clever, biting content for websites with names like Celebitchy and D-Listed and Gawker, making fun of famous people with a sense of playfulness that would die forever when the latter outlet was bankrupted by a lawsuit filed by a celebrity wrestler.

It was a wild time to live on the Internet, and not every new media player of the 2005-2014 era has survived long enough to chronicle the lives of Gen Z's famous teens. But Eng has, and there's a simple reason for that: he plays nice. "There was a point, during that time when everyone was snarky, that I was trying to fit in," he admits. "I would spend an hour trying to come up with a witty headline and zing the celebrity. But it wasn't me. I was trying to be something that I wasn't."

What comes more naturally to Eng is fandom. Whereas Perez Hilton turned to gossip blogging after his acting ambitions fell through, Eng has never aspired to fame — just proximity to it. He founded Just Jared in a spirit of celebration, not bitterness, and that sense of devotion has kept his website unexpectedly relevant in an age where stans rule and journalists struggle to gain access to stars who no longer need to land magazine covers in order to promote themselves.

The website's friendly ethos is rooted less in media strategy, more in its founder's restrictive Christian upbringing. As a child Eng was almost completely cut off from popular culture, and only allowed to watch 30 minutes of TV per week. "Our parents never took us to the movie theater, we never went to concerts, we only listened to contemporary Christian music, and we never had cable," he recalls.

Eng's pop education began when he discovered MTV and Livejournal as an adult, in college. Just Jared was a natural combination of the two mediums: a personal website devoted to the singers and actors he had become suddenly and extremely obsessed with after two decades of deprivation. He plastered his dorm room with posters of Britney Spears and The Backstreet Boys, and fell in love with Mandy Moore's unabashedly tacky music videos. What started out as a more mundane personal venture turned into a highly researched and meticulously updated shrine to all things mass culture. Early Just Jared posts, particularly those about a then-closeted Anderson Cooper or Jennifer Aniston versus Angelina Jolie, quickly amassed lengthy comment sections, and a steady stream of ad revenue followed.

Eventually, Eng moved from New York to Los Angeles, where he still resides. It isn't unusual for him to bump into the people he writes about, and when he sees them they're always friendly. Why wouldn't they be? He's their biggest fan. He's rooting for them. Eng was the first person on Twitter to excitedly respond when Amanda Bynes shared her Break the Internet cover story; she immediately liked his post. Many of Just Jared's hottest tips come directly from celebrities themselves — such is the strength of the brand he has developed over 14 years. "They trust me," he says. "They know I'll post something timely and positive."

Jared Eng on Instagram: “When her beauty is blinding 🙈 — Happy birthday @badgalriri you are the baddest bish in the game!!! 3️⃣0️⃣💎”

With good press comes good press access. A highlight of Eng's career so far was touring across seven countries with Rihanna in 2012. "Not to be a bragger, but I was the only press allowed to be there with her backstage, talking to her," he explains. "I had the best experience of my life." He isn't friends with Rihanna, per se, but the two have steadily kept in touch over the years: "She's been super good to me, and I've been her number one fan from the beginning. If you're nice to someone, they'll be nice to you back."

And the industry is nice now. In a glossy, slightly sanitized way. Celebrities are more guarded and paranoid than they've ever been; the days of starlets brazenly partying in public are over. Kylie Jenner, as far as we can tell, goes to bed early. Eng attributes this trend to social media, which has enabled the citizen paparazzo. "If a celebrity is an asshole, a fan will catch it, and the whole world will see," he says. "And no one wants to hire an asshole actor, no one wants to work with a musician if you're a producer with an asshole. There's a no asshole policy these days. You can't walk down the street drunk anymore, because someone will catch you, and the studio will fire you. Celebrities are smart now, they'll have fun and party in a private residence."

Jared Eng’s Instagram post: “When #TaylorSwift lets you carry her and her security and publicist nearly have heart attacks 😂😂 #ReputationStadiumTour #RepTourPasadena…”

In Eng's happy version of Hollywood, where the headlines end with explanation points and the paparazzi shots tend to be flattering, the only crime a celebrity can really commit is ambivalence. He loves pop culture, and he expects pop culture to love him back. Fandom is a two-way street, and for a famous person to neglect or reject their own star power is a serious transgression.

"There's tons of celebrities who don't want, or at least say they don't want fame," he says. "And I say this all the time: an actor who loves acting, go do a play. Don't go do a big movie franchise if you don't want to be famous. If that's your calling, then you have to do paparazzi. You have to do press. You have to do photoshoots. That's the game. You're either going to play it, or don't do it at all. Don't complain. That's the business."