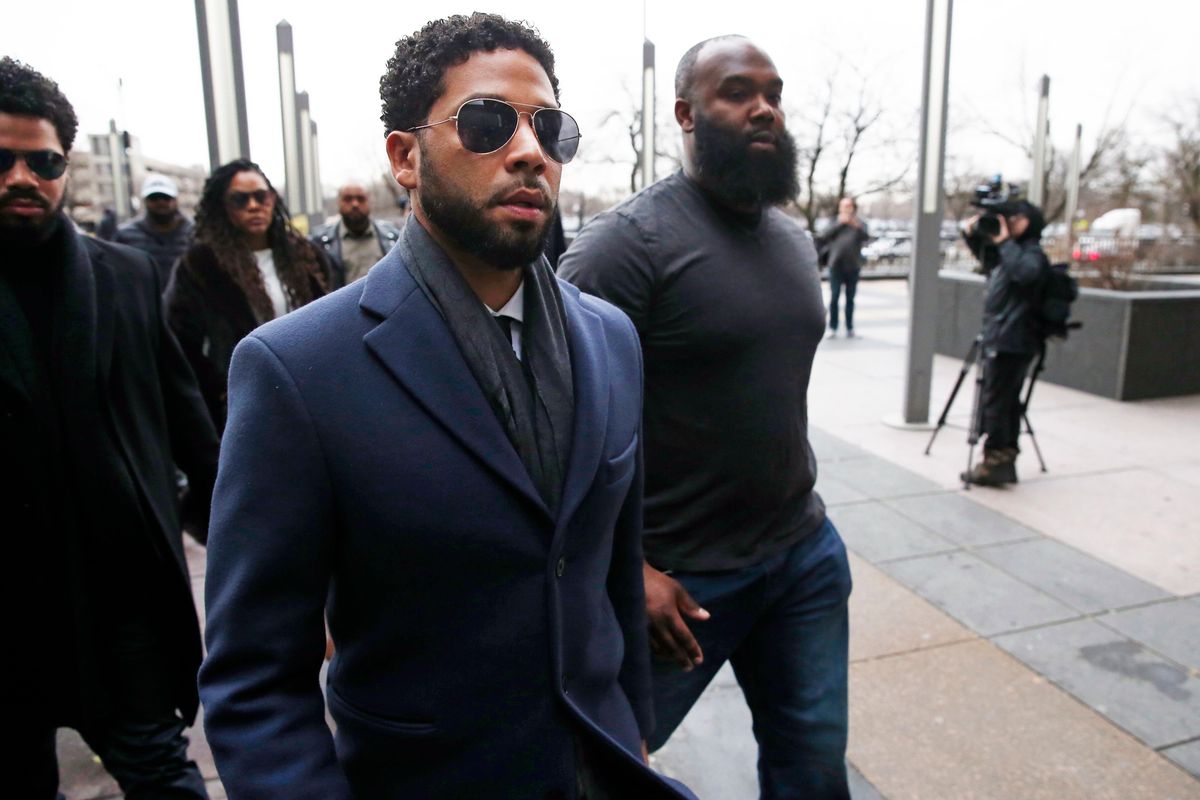 In the latest puzzle of the Jussie Smollett case, it's been revealed that the Empire actor accused of faking his own hate crime's 16 felony charges were dropped after — and in part, because — he performed 16 hours of community service at a Jesse Jackson's Chicago civil rights non-profit.

The actor reportedly completed the hours this past Saturday and Monday at the Rainbow PUSH Coalition, which Reverend Jesse L. Jackson, Sr. founded in 1996. The organization is an "international human rights/civil rights organization that is committed to advancing the human rights of all people." Smollett's service included speaking with students about the music and film industry, and working in the PUSH Freedom Store. He also helped "review and assess" the organization's TV output and social media, giving feedback on their weekly PUSH broadcast, according to CBS Chicago.

"When he first was reported to be in the crisis, we reached out to him like we often do. He responded, came over that time. I sought to council him," Jackson told CBS Chicago. "And hopefully this chapter is closed.

Related | Jussie Smollet's Charges Dropped: 'He Was a Victim"

In a statement, the Rainbow PUSH Coalition emphasized that Smollett's service was not court-ordered.

"When we first heard of Jussie Smollett's crisis, we reached out to him and "Empire" to see if we could be helpful. Jussie met with us and has given of himself to our organization and the movement for social justice."

Smollett's "volunteer service in the community" was one of two reasons Cook County State Attorney Kim Foxx and lead prosecutor Joseph Magats gave for why they decided to drop Smollett's charges, alongside his agreement to surrender his $10,000 bond. "We believe this outcome is a just disposition and appropriate resolution to this case" Foxx said after the court hearing yesterday.

Prosecutor Magats has made clear that he does not believe Smollett is innocent. However he's explained that "thousands of cases have similar resolutions" and believes actor is only being scrutinized because he's a celebrity. "We believe he did what he was charged with doing," he said according to CNN. "This was not an exoneration."

Though Smollett has remained faithful to his story that he was attacked, in light of the dropped charges, many are unsure what to believe about the veracity of the attack. Among those who believe the hate crime was indeed a hoax, it'll likely draw scrutiny that only 16 hours of service — one per felony charge — and $10,000 was deemed "appropriate resolution."