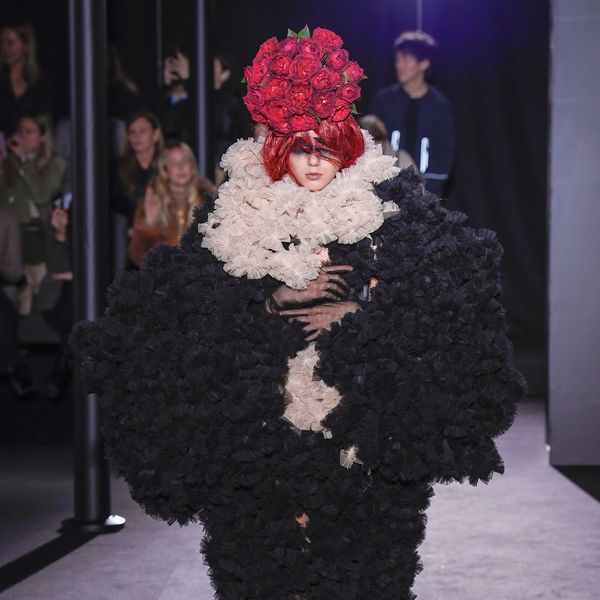 Comme des Garçons is rightly one of the most anticipated shows of Paris Fashion Week. Rei Kawakubo is a living legend and spins magic in the form of clothing and concept, all neatly packaged up in beautifully poetic shows staged twice a year. However, under the same CDG umbrella live two other Japanese brands that show on the calendar the same day: Junya Watanabe and Noir Kei Ninomiya.

This season, Noir Kei Ninomiya focused on the theme of the rose (the third collection centered on florals from the designer); the soft side and the tough, spiky alternatives in between. The designer literally sent hundreds of roses down the runway on models' heads, courtesy of hair stylist Taka Nukui and florist Makoto Azuma. The effect was so powerful, you could smell it throughout the venue.

Eyes were disguised in a thick black mask painted on in makeup by Go Miyuki. Overall, the contrast of silhouettes, colors and textures proved to be one of the most moving things we saw during Paris Fashion Week.

The black honeycomb-esque creations that swallowed the models in exorborant texture represented a darker side of the rose, while the lighter fabrics mimicked popcorn effect and flowers blooming in motion.

At Junya Watanabe's show earlier that day, the Japanese designer took a softer turn and put together a collection with clear kawaii references. In fact, Kawaii is what he titled the collection. Back in June, Watanabe put out a collection exclusively featuring silver-haired men of a certain age, but this season he took a decidedly opposite approach.

Sky-high pigtails, supersized lashes and models who walked out in pairs like little dolls were the mainstays of the fall 2019 womenswear collection. Still, there all the signatures of the Watanabe brand: spliced dresses, denim gone askew, patchwork fabrics and utilitarian outerwear.

The designer also brought back one of his most iconic pairs of shoes: the black studded boots (in higher and lower cut styles, the latter resembling cowboy boots). The studs are so spiky, they look dangerous. Perfect for the post-apocalyptic, clothing as armor for women themes we've been seeing so much of at the fall 2019 collections.

The Glamorous Life of The Clermont Twins

The Kardashians Can't Stop Adding to Their Judith Leiber Collection