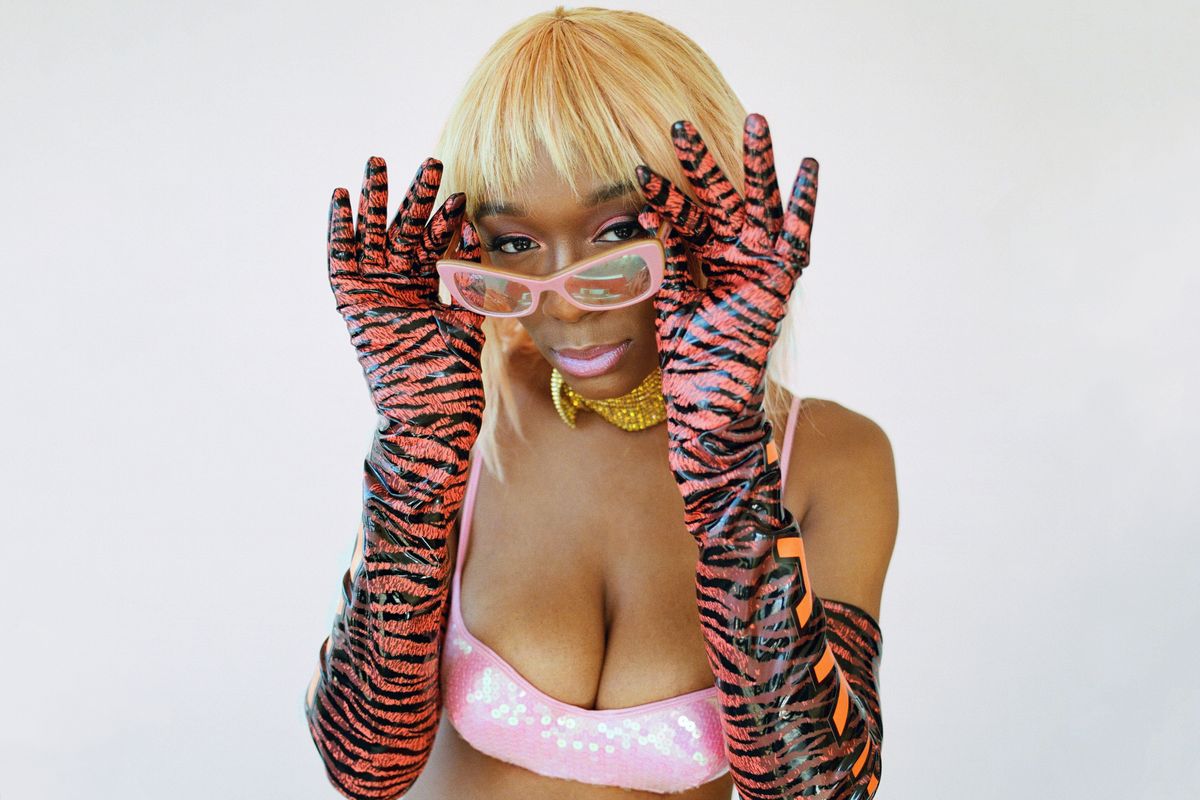 Junglepussy Is Writing Love Songs About Herself

Last Friday, 26-year-old rapper Junglepussy (born Shayna McHale) decided to partake in an activity that she hadn't done in a while: watching TED Talks in her Brooklyn apartment. She had selected one called "The Art of Being Yourself," in which a Scottish guru of sorts tells the audience to "make your life your message."

"I'm doing a bunch of self-help Fridays up in my crib," she laughed. "No, I'm just kidding. It's really because I ran out of astrology videos to watch."

Junglepussy — Scorpio, Leo rising, moon in Leo — like countless members of the zodiac meme generation, is into astrology (as she raps on the triumphant single "State of the Union," "My birthday Halloween so I'm freakier than you"). She is aware of her "Scorpionic" energy. "The ocean is the Earth's thermometer," she explains. "So imagine being a water sign. We feel it. Oh my gosh. Who feels it like us?"

There aren't many people who feel it like Junglepussy, whose relentlessly quotable lyrics are simultaneously wryly side-splitting and warm as a hug, rapped over lush beats often manufactured by her longtime collaborator, the producer Shy Guy. Whenever the music feels languid, Junglepussy's confident flow snaps back like a rubber band — and she's itching for you to hear more of it.

In addition to "State of the Union" (a song where every line has the tenor of a particularly triumphant JP tweet — as she told Dazed, it should be called "State of the Pussy") and the blissed-out "Showers," featuring vocals from her three-year-old nephew, there's a third album on the horizon, which has yet to be formally announced or titled. It's been finished for over a year, and JP wanted to point out that this means one of "State of the Union's" best bars, "I'm smoking Spike Lee joints/ She just gotta have it," was recorded ages before the She's Gotta Have It reboot was even announced. Her taste, in everything from '80s movie references to little-known Berlin labels, tends to be prescient.

"I'm trying to get into the hyper-productive millennial thing. That's what all the kids like: Fast food, fast music, fast love."

Junglepussy is nervous that people think she's been lazy. Her last record, the honeyed Pregnant with Success, was released back in 2015, which to some fans may as well have been in the Mesozoic era. But the intervening years have been packed with work: JP was on the cover of a Barney's catalogue; lectured at Yale and Columbia; made her own brand of Junglepussy Juice, consisting of orange, pineapple, carrot, and ginger (the rapper, whose family hails from Jamaica and Trinidad, often describes her lifestyle, music, and personality as "tropical" — a new, unreleased track uses the ocean floor as a metaphor for her, well, pelvic floor); and finished her album before filming a movie, the breastaraunt-set "Support the Girls," starring Regina Hall, which premiered to raves at SXSW.


On top of her other projects, this year Junglepussy went on tour in Europe, playing shows in the UK, France, Germany, Poland, and Denmark. The experience was less than ideal; the musician said that traveling in Europe lead to "the most disgusting racism I've ever experienced." An incident on a train in Poland was particularly upsetting, as if the phrase "train in Poland" wasn't ominous enough already. Junglepussy was just sitting with her DJ, another young black woman, when police were called to the train. She said they treated her like she had "pensises hanging off my head."

Vile conduct soured much of the tour experience, although time in London proved creatively fulfilling (JP said time with British artists like Nadia Rose was "poppin', and let me pop out of my bubble." Then she mimed popping out of a bubble). Younger, eager crowds at her shows also provided a glimmer of hope. "The little kids are going to hold it down for us," she says. "The ones behind us, they a little fucked up because they came right after us, but like the next [generation], the next batch. Like when the iPhones come out, you don't get the first batch of iPhones. You gotta wait till they get the bugs out."


Throughout our interview, Junglepussy goes back and forth about politics and themes in her music, thinking out loud. Self-awareness in the face of global crisis was a factor in her (relatively short) album delay. "2015, 2016, those years sucked," says Junglepussy, somewhat cautiously. "I didn't want to shift the attention on me when the world was going through something way bigger than me."

JP goes on to say that she wants her "art, and everything else, to speak for my existence and my representation as a young, black artist," but she doesn't want to be unfairly pigeonholed. The music is primarily specific to her, and she wants it to be recognized as such. "I just want it to be Junglepussy above all," she says. "Above everything."

The album, still in limbo, is indeed pure, acutely witty Junglepussy (a preview: there's a track featuring the legendary Gangsta Boo with a joyful hook about "feelin' the, feelin' the dick, all up in my armpit"). There are anecdotes about dating and sex — on one song, the rapper knows she's really into a guy because she "might like him better than Trader Joe's" — but it, like JP's preferred TED Talks, is mainly about self-affirmation, a mega-watt paean to loving oneself without the thinly veiled condescension of said TED Talks. The experience of listening to the record is perhaps best reflected in a tweet from one @Bosheni, who wrote that "listening to Junglepussy makes me feel wealthy but like, spiritually."

"I've really been figuring out what I want to represent and what I want to say and making sure that my music is the most true reflection of that," she continued. "The most pure, untainted, organic, no GMO music. Just natural organic growth." It's as bracing and tangy as a fresh-squeezed juice. Preferably cold-pressed.