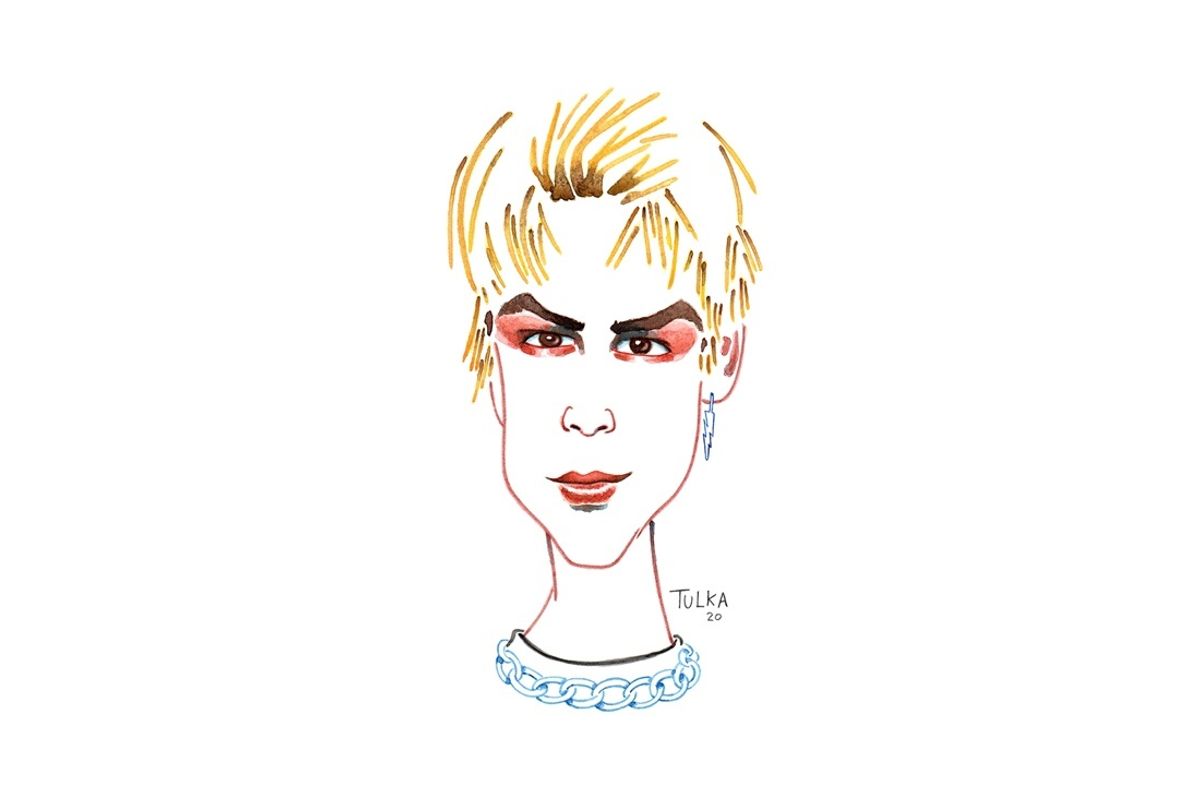 Julio Torres and His Shapes Are Just Barely Holding Up

Story by Will Weir / Illustration by Rick Tulka
Paper Magazine

We've spent an unprecedented amount of time inside our homes for the past few months, and many of us may start to notice small details about our quarantine space that might not have stuck out before. Maybe it's, "Where did I get that LEGO dinosaur?" Or maybe the delirium has taken us further to, "How does it feel to be that LEGO dinosaur?"

This type of contemplation might be new to some of us, but these thoughts are all too familiar for Julio Torres, a comedian who has often meticulously examined the interior thoughts, emotions and even dreams of inanimate objects.

Related | So You Want to Make a Quarantine Comedy Video

His ingenious, otherworldly HBO comedy special, My Favorite Shapes, featured Torres introducing us to squares, ovals wishing to be circles and penguin-race toys that were allegories for the middle class. Additionally, Torres is known for his work as a writer for SNL, penning sketches about the many existential crises a sink can face, toys for thoughtful boys and graphic design choices for blockbuster franchises. He is also one of the co-stars, co-creators and co-writers of HBO's first Spanish-language comedy series, Los Espookys, in which he plays an heir to a vast chocolate empire with a penchant for purchasing enchanted mirrors and grappling with internal water demons.

Curious as to who, and what, he's been talking to during his time in quarantine, Torres gives PAPER an at-home video update with his shapes. He also sat down (over Zoom, of course) to tell us about progress on the second season of Los Espookys, his quarantine routine and how he identifies most with the color orange, for now.

We wanted to catch up with you during quarantine and see how everything is. Are you in New York?

I'm in New York, yeah. I have been putting in a lot of work into the apartment. Just like a little refresher, going in the same direction, but fine tuning some things.

What have you been working on? Is there anything in particular coming up?

I've been working on a few ideas, just seeds of stuff, just looking ahead into a future when we hopefully are able to film stuff.

You've mentioned before wanting to work on a feature film?

One of those is the seeds. So I'm just watering it, seeing if it sprouts anything. It's starting to sprout but I don't know yet if it'll die or if it'll, yeah.

Have you already shot season two of Los Espookys?

We started shooting season two and then we had to stop. And we'll go back when it's safe and ok to go back.

And you shoot in Chile?

We shoot in Chile, yeah. We were down there when this whole thing started and I mean it's truly the same all over the world that when you're watching the news you're like, "Uh oh look what's happening in New York... Well, late for work." And then I'm like "Huh, one case here, oh 10 cases here, oh we're shutting down I see."

Were you in touch with friends in New York while you were still in Chile?

All my friends are here in New York and talking to them [when] I was in Chile, some of them were like, "Nah," and some of them were like, "I bought so much bottled water already and I'm hunkering down because this is coming and people are laughing but..." And I'm very happy that I missed the whole toilet paper phase of it, the, like, manic shopping doomsday moment of it. I'm glad that I missed that and I came [back to NYC in] the beginning of the actual quarantine.

"I realize that in this movie kick I have, I connect with protagonists that are either ghosts, aliens, AI's, holograms, or like Pinocchio."

Any tips for keeping busy?

Just having a schedule of eating, working on stuff, and then watching a movie a day.

A movie a day, that's a good project.

I realize that in this movie kick I have, I connect with protagonists that are either ghosts, aliens, AI's, holograms, or like Pinocchio. Anyone who's like longing to be a part of something, but isn't quite that, so they're just sort of learning how the world works, I love. I saw a movie called Mishima 1985 and it has some really beautiful sets, and I love sets so I loved it mostly for that.

On the note of sets, I know you collaborated with your mom and your sister on the sets for My Favorite Shapes. Have they been involved with Los Espookys at all?

Yeah actually, my sister makes handbags and [Los Espookys character] Ambassador Melanie Gibbons has worn a few. I have worn a few, too.

I suppose there's not too much you can say about the series at this point, but how do you feel about the progress of it? How was the shooting going?

I love it. It's such a joy to make because it's truly just friends making a show which is, to my understanding, rare. It's friends making a show and having the trust of a network, which is great. There's no crazy network notes trying to make it something that it isn't. And I love everyone who works on the show and doing it in Chile feels very special because we're only there for that. And I really like this season. We're editing what we have and it's really exciting.

You've mentioned before that your mom designed a lot of furniture in your house growing up. Do you have any of her pieces in your apartment?

I do! I'm sitting on one of them that was in My Favorite Shapes. I think that's all I have for now. It's a little tricky now that, you know [with] distance and shipping stuff. But HBO paid for the shipping of this chair, so it's fine.

Have you designed any of the furniture in your apartment?

Co-designed, yes. I have a friend who makes furniture and I wanted a sectional for a corner of my apartment. And my mom happened to be here, so then it sort of became a collaboration between the three of us. And a couple months later he had a sectional! And then I have a little [piece] that's like a podium, but it just looks like a pedestal that was designed to do an excerpt of Shapes at The Tonight Show.

"I was feeling orange for a little bit because I like the joy of it. I've been averse to warm colors for so long."

When you collaborate with those people, do you usually sketch something out or do you describe it to them?

It depends on who it is. With these friends, I don't want to like, step on toes, so I give them a vague sense of direction and then they run with it and then we fine tune some options. With my mom, I can just sketch and show her something. But this chair was all her.

You often talk about how your clothing reflects your mood or how you're feeling. What you're thinking in this uncertain time? Have you been wearing any colors in particular?

No, I've been wearing the same three things and washing them. But I've been feeling orange lately. So that is sort of the extent of my expression right now, because I mean quarantine obviously is not a time to be seen. I've been sort of just quietly working on stuff in my apartment. So, it just feels like a uniform. Usually black feels like, "Ok I'm just working."

I've loved the stuff you've been doing lately on Instagram with the colors. Can you explain how you started thinking about that?

I think that with anything that I do I've been thinking about it for literally years, and then I'm like, "Wait, is this something that other people would connect with? Or is this just one of many things that's just like no?" And I have a 50/50 success rate with those kinds of ideas, so yeah, I don't know, it's been a fun exercise and then I'm like, "Is there a special here?"

And why are you feeling orange lately? I can see you've committed to the color enough to dye your hair.

I was feeling orange for a little bit because I like the joy of it, there's a happiness to it that I like. And I've been averse to warm colors for so long, I was just like... icy, grey, blue, for a while, but now I think it's all just beautiful.

I also have loved the hand acting seminars on Instagram. Has that been percolating for a while also?

Well yes, in that obviously My Favorite Shapes had a lot of hand acting in it. And then in shooting Los Espookys I was just like, "All of my good choices acting wise are in my hands." So then while shooting season two we're really honing in on my hands, because [in acting out] both the colors and the hands I think, like acting is not my strength. I'm a performer and I'm a writer and I'm a comedian and acting is still weird uncharted territory for me. Performing isn't even acting obviously, but now I'm like, "Oh! The color blue," like I can play that, that seems easier to access than like some person.

Because you're familiar with the colors.

Yeah, I'm familiar with the colors and I get them. I know what they express. And the hand [acting] is, I don't know, it's so fun.