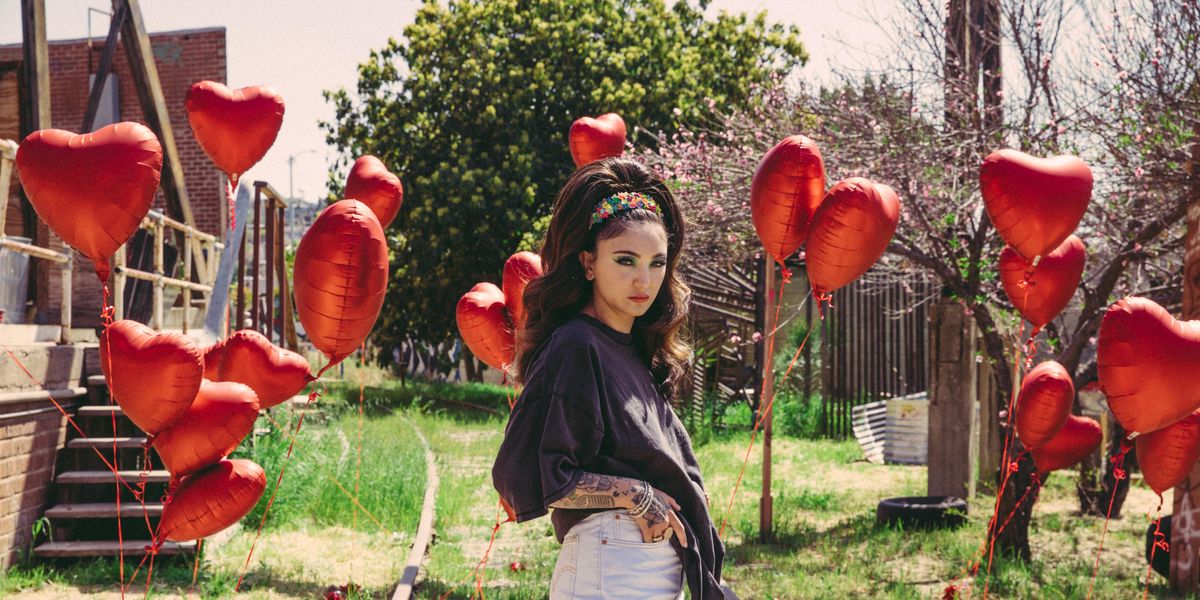 Julia Michaels has a new perspective on love.

"I used to think that I had to create chaos to write a really wonderful song about love, and that's just not the case," Michaels tells PAPER. "You can be extremely happy and in a healthy relationship and still have a point of view about love where it doesn't sound cheesy and ridiculous."

All of that is captured on Michaels' highly-anticipated debut album, Not in Chronological Order, out now. The album is just what its title teases: A complete story told in flashbacks. Moreso scrapbook, less neat timeline, the track list is organized through Michaels' slightly worn out, lovestruck eyes.

Not in Chronological Order captures the supreme complexity of true love. "There's some heartbreak in the middle of love, and insecurity in the middle of the heartbreak, and all of these layers," she explains. The back and forth, the trauma and triumph, the hesitation to open up despite knowing you can't resist — the ability to harness that vulnerability is what sets this popular songwriter apart as one of the best.

The album is all Michaels, all the time. As opposed to previous collaborative hits — like Selena Gomez's "Lose You to Love Me," Justin Bieber's "Sorry" and Dua Lipa's "Pretty Please," which Michaels wrote on — she tells her story with one voice this time around. And it is as magical as you'd hope from Hollywood's top lyrical therapist to the stars.

The album kicks off with "All Your Exes," a pop tune that captures the desire to be someone's all, everything, and every breath. "It's saying that loving somebody before me hurts so much, because I love you so much. And the thought that you were intimate or had a shared experience with someone else kills me," she explains. Next: "Love is Weird," a songwriter's "Hail Mary," which Michaels describes as a hit written on the back of another song in less than an hour.

"Orange Magic" sits midway through the album as Michaels' partner, musician JP Saxe's, favorite tune. "So, sometimes I think I have some weird, witchy powers," Michaels preps me before sharing the backstory around the track.

She explains: On their first date, Saxe asked to pick Michaels up at her home, arriving in a glitterfied, poop brown BMW. "I was like, 'Oh my gosh, I can't believe I'm getting in this car,'" Michaels jokes. Three months later, smitten with their new romance, Saxe calls Michaels to let her know that his car had been stolen. When found shortly thereafter doused in gasoline, "all that was left in there was a new addition razor scooter, $200 worth of quarters and some Jack in the Box."

In that moment, Michaels could only think one thing: She manifested that. And three months into their relationship, the shiny poop-mobile was gone, only to be reminisced upon in "Orange Magic." "I put that story in there to commemorate the moment," she jokes.

The rest of the album — including the lyrically excellent, bop of the summer, "Lie Like This" — builds to what has become Michaels' calling card: A painfully raw and relatable ballad titled "That's the Kind of Woman," which explores all the traits Michaels envies: stability; emotional security; someone that doesn't hate her voice, that takes her own advice.

But in reflection, those quirks and tendencies are what make Michaels the vulnerable, damaged, persistent and completely lovable woman she's grown to be. And now, in full album form, she's ready to share that with the world. Not without hesitation, of course.

"I'm always having some sort of existential crisis at night about the album being like, 'Is this good enough? Is this me enough? Do I need to take this off? Should I have done this more?' And then, I'm just having a full on meltdown. Then two weeks later, I'm like, 'No, I think this is good,'" she laughingly shares.

Not in Chronological Order comes four years after her Grammy-nominated debut single "Issues" hit the charts. And the time since then feels full-circle: In 2017, "Issues" was written as a breakup mechanism, a moment when Michaels knew she deserved better from romance. And now, in 2021, she's found it.

In quarantine and in love, she's started to see past everything that's wrong with love, and start to gravitate towards everything that's right about it. And that perspective guides the lyrically brilliant, sonically beautiful album to success.

"Love doesn't look like the movies. It's not chaotic. It's not scary. It's not dramatic. I know that it is easy and wonderful. And it's so different from anything I thought that I deserved for myself."