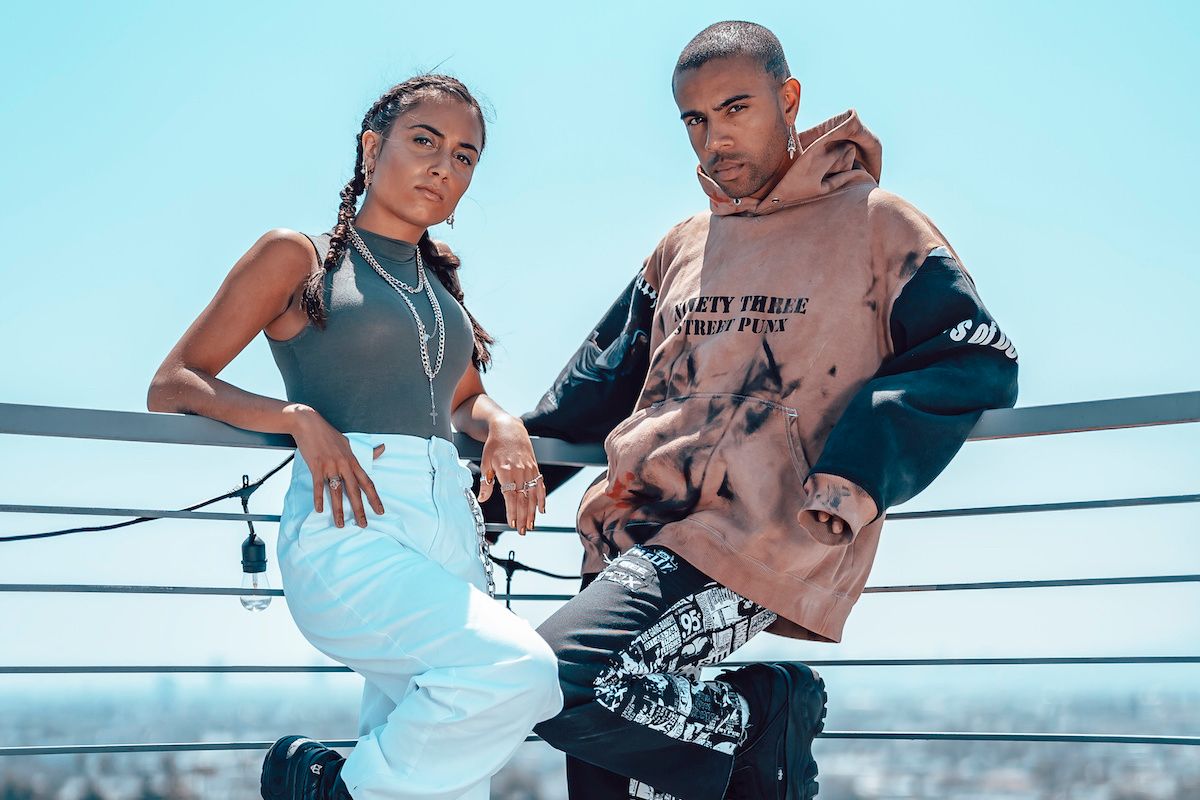 JUJ and Vic Mensa on Their New Collaboration and Staying Real

On bittersweet lead single "Mood," the singer-songwriter from Philadelphia weighs the pros and cons of moving to Los Angeles to pursue her music career. Ultimately, she decides that her dreams won't come true without action.

And it seems those dreams are rapidly coming to fruition: recently, she worked with revived streetwear brand, Champion for a sold-out collaboration. Just last week, JUJ released a new version of "Mood," on which Chicago rapper Vic Mensa lays down his own verse detailing his experience pursuing his dreams with vivid, somber detail.

Listen to the track, below. Also, JUJ and Vic Mensa talk to each other about transitioning from underground to mainstream success, writing truthfully, and overcoming obstacles.

JUJ: I'm so excited about the new "Mood" verse. I just wanted to hear your thoughts about when you first heard it and how the verse inspired you?

Vic Mensa: You know, I first connected with "Mood" when I heard it. When you're speaking about moving to California, the fears or other people's fears and doubts associated with breaking out of a shell. That's something I can relate to. Because most people that I grew up with never left. They're still in Chicago, so that's the place I went to when I started writing my verse. I usually write things in the studio, but with this one I was just walking around the house thinking about what it was like when I left home significantly for the first time. When I was 17 years old and I started going out on the road. People's expectations, limitations, and the boundaries they wanted to put on me were the things that I set out to overcome. Those are the things that I was inspired to write about.

JUJ: Did you ever have doubts about leaving while being in Chicago? Doubts about moving out to LA when you were 17?

Mensa: I didn't move to LA when I was 17. I just started moving around. I always knew for me to go where I wanted to in my life that I was gonna have to leave home. I keep such a strong connection to home. I do so many things in Chicago, but sometimes it's better for me to be a little bit outside the situation to be more impactful.

"I don't know many people who have a similar situation to us moving away from home to pursue a career at 17." — JUJ

JUJ: Yeah. I don't know many people who have a similar situation to us moving away from home to pursue a career at 17, so when I heard your verse it felt very authentic to my story about the struggles and hardships. There's not many people who have experienced that, so it really touched me.

JUJ: I was telling my team that during my freshman and sophomore year of high school "Liquor Locker" [from your 2016 album, There's Alot Going On] was the song of those years.

JUJ: That was super big on the East Coast and a huge thing. You really impacted rap a lot on the east coast with that song. I just wanted to ask if you had any advice or anything to say on your come up from the underground to mainstream?

Mensa: I think that as time has past for me, the goal and the trajectory has been to come closer into myself. Trying to maintain the motivations that inspired me to make music in the first place. The necessity to describe things happening in the world around me. To make sense of them, to make sense of my emotions and my relationships. Those are the things that really galvanized me to pick up a pen in the first place. And as more attention or fortune has come my way, it's been a process of maintaining myself and staying [true to] myself... So JUJ, how is it for you being a new artist or having a breakout moment right now?

JUJ: Well, I feel like it's been something I've been anticipating my whole life. Like you're saying, if there's always been something in me that feels like I want to do more, and was bound to move away, and take everything I've learned from my roots and use it. For instance, my music. I'm trying not to be another 19-year-old writing relationship songs. I'm trying to write about some social issues. Whether it's challenging my generation to rise above the norm or like you with immigration [in your new video "Camp America"]. I'm not trying to be another breakup, relationship artist that gets thrown away on the side with the rest. Has there been anything significant in your life that you'd say you had to overcome that impacted your career?

"I had a lot of issues with drugs and everything that comes along with a quote-unquote rock star lifestyle. Those things can start to consume you." — Vic Mensa

Mensa: Addiction is probably the first thing that comes to mind. I had a lot of issues with drugs and everything that comes along with a quote-unquote rock star lifestyle. Those things can start to consume you. They transform you. At a point in time, I found myself feeling very reliant on drugs, alcohol, and other things to function or feel okay. I realized there was a problem. So many young artists are passing away right now from fentanyl [overdoses].

JUJ: Do you feel like this shaped your career in any way?

Mensa: I feel like as a human being knowing addiction is something that gives you a kinship to other addicts and a specific perspective on the world. You know what it's like to be in that position, so I think that 100 percent shaped parts of me as a human, and then by proxy as an artist, as well.