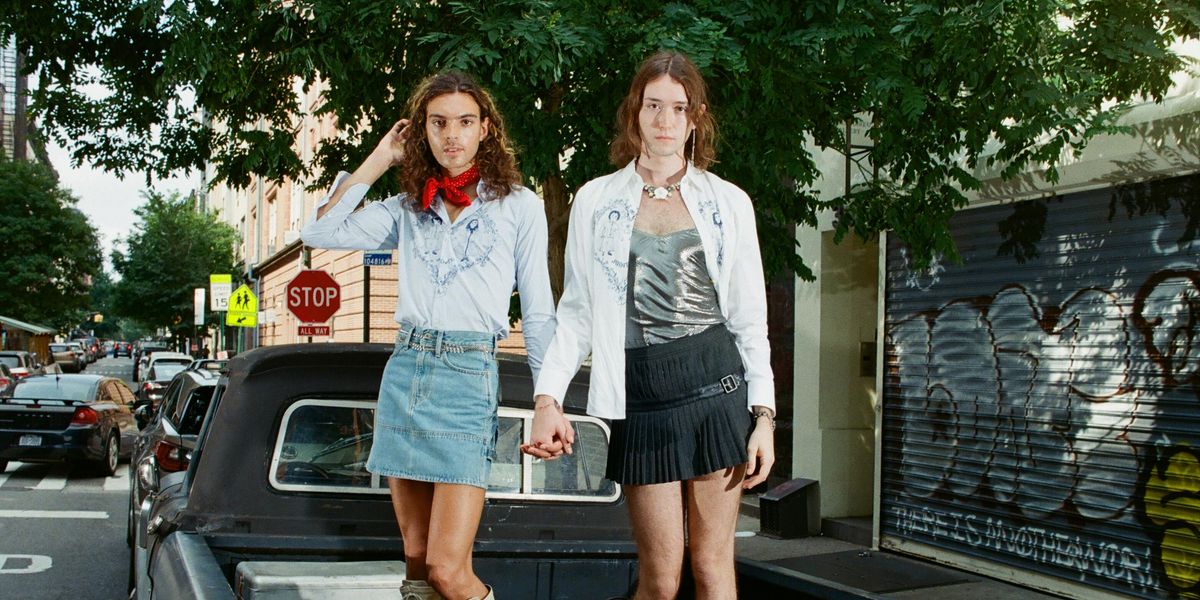 Judith Studios Is the Queer Label Finding Liberation in Kookiness

Erik Goldberg founded Judith Studios — his line of whimsical, artsy and gender-free ready-to-wear — right during the pandemic. But like many young designers tapped into their community, Goldberg had a big desire to celebrate and work with his queer cadre of creatives.

And so, he decided to develop a secondary line called Everyday Judith which is priced more accessibly and doesn't depend on seasons. The range, which consists of hoodies, t-shirts and tailored cut-and-sew pieces, was shot on Goldberg's close friends rather than traditional models.

"Everyday Judy is a way in which we can take the more complicated or abstract things going on in the bigger collection and package them in a way that could be accessible to anyone on the street," Goldberg tells PAPER. "It's also a way that I can start to collaborate with all of the people who exist in my world and make a space where other young artists and queers can grow together with it."

The designer, who is based in New York and grew up in New Jersey, graduated from Pratt in 2017 and launched his label shortly after being let go from Alice + Olivia when the lockdowns hit. "My mother always said if I had been born a girl she would have named me Judith," he says of his brand's name. "It's name after both that and Judy Garland, of course, I'm a white gay guy from New Jersey. Judy ran so we could walk, you know?"

He held his first show at the Abron Arts Center in New York City last year, and, true to his scrappy roots, called in favors from every friend to help put it all together, from the casting to flowers. He describes his debut collection as very dark, almost a bit like a funeral. But for the upcoming spring season he expects to indulge in all things bright, colorful, feminine and kitsch camp.

"The only thing I ever remember doing as a young kid was drawing dresses," he says of his early design inclinations. :Something about that scene in Sleeping Beauty, when the fairy godmothers make a dress appear out of nowhere really traumatized me in a good way because I have been chasing after that ever since. There's something magical about clothing and growing up being a really awkward, not just gay, but weird kid, in conservative New Jersey. Clothing was the only emancipatory thing I had."

His first temporary gig out of Pratt was at Calvin Klein in the accessories department when Raf Simons was still there. Afterwards, he landed his first job with Jill Stuart before landing at Eckhaus Latta and Bode when they were both in their early brand stages.

"I also owe so much to Mike [Eckhaus] and Emily [Bode] who both have been so kind to me since I graduated," he says. "When I worked for Eckhaus Latta, we had a bunch of folding outdoor tables, the ones you get for a picnic. We were four interns in a little studio in Chinatown working on these tables and making clothes and having these communal settings."

"If I didn't have that really amazing learning experience, I don't think I would have ever gone off to do my own thing," he continues. "And same with Emily. When I was there, she was just starting. And that's the most exciting time for a fashion brand. I think when people are first starting and they're figuring it out."

It's that sense of community, coming together and collaboration that Goldberg is applying at his own label, with his Everyday Judy capsule a visual representation of those efforts. "I would hate the idea of one person becoming successful and other people not becoming successful in relation to that," he says. "I think the only way we'll ever move forward as a community is we all try to grow together horizontally."

At the end of the day, Goldberg's biggest goal is just to make a collection he's proud of. "The hardest lesson I've learned is if I don't walk away feeling like I made myself proud, then it's not going to be worth it," he says. "For so long, I was afraid of being myself. There are so many other kinds of beauty standards that we can exist in. Not everyone aspires to a certain kind of chic and that other chicness does exist. Each kind of beauty is authentic and genuine and will have a community. People will appreciate it."