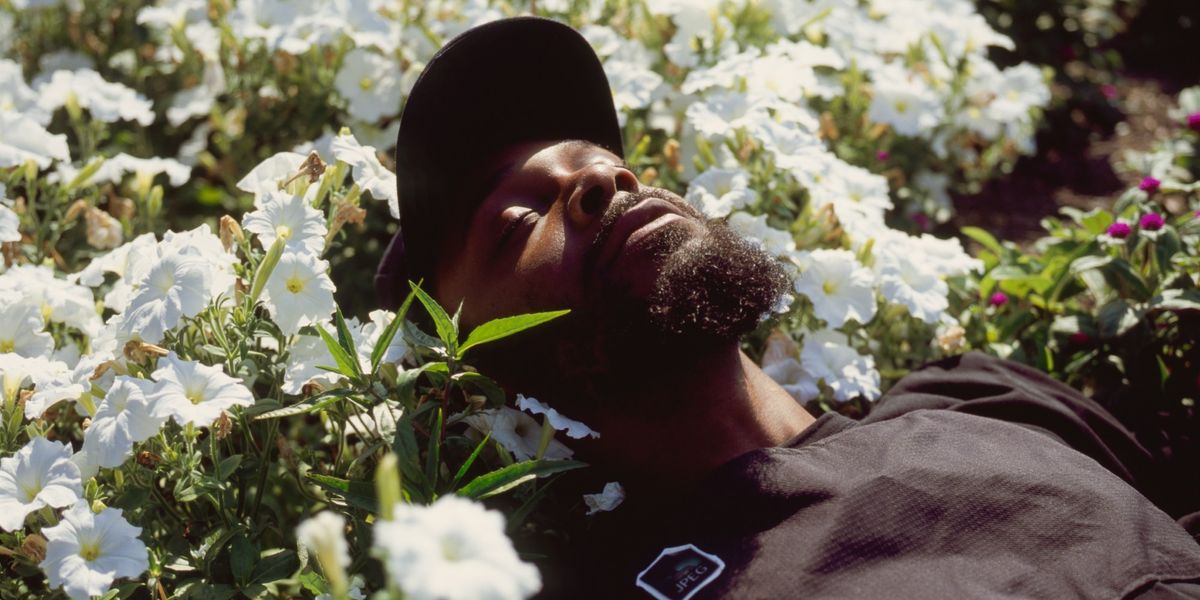 JPEGMAFIA gets hate mail. The emails call him a black supremacist and other "wild shit" he says. But that's the least of his worries, as a play of his recently released The 2nd Amendment EP to the wrong ears will likely escalate to death threats.

JPEGMAFIA is the contrarian rap alias of Barrington Devaughn Hendricks, who writes, records, and masters every release in his home studio in Baltimore. Beginning last April with Communist Slow Jamz, followed by Darkskin Manson in the wake of the Baltimore uprising in response to the death of Freddie Gray, and bookended by February's Black Ben Carson tape, each release is designed to provoke and incite -- and The 2nd Amendment EP, recorded in collaboration with fellow Charm City rapper/producer Freaky, is no different.

But inflammatory barely begins to describe lyrics like, "shout to my n*gga Micah Johnson down in Texas / he fucked them cops good / I can't wait for the next hit" on The 2nd Amendment's "#Trussmidaddi". And yet, JPEGMAFIA's verse—that later proclaims the Dallas officers killed can suck his dick—is all about employing the same language exposed in private police emails and posted in racist tweets by the Traditionalist Worker Party when unarmed black people are murdered. After all, it's all protected under the First Amendment, and he says he ultimately doesn't feel incentive to be positive, since the police never offer empathy when the victim is black.

"I wanted to take a firm stance as a 'fuck you' to anybody who thinks differently, because that's how they look at us," he says. "When they rolled up and shot that 12-year-old [Tamir Rice] there was no fucks given at all. They didn't think about it. It was nothing to them. When one of them goes, then it's like 'okay.' Why should we react with empathy when they've never had any?"

We spoke to the provocative rapper about the right to bear arms, police brutality, embracing contrarianism and more, alongside a first look at the riotous, phone-shot video for his track "BUMBOPUSSYRASCLAT."

The 2nd Amendment puts more emphasis on the textural mood of the production -- which informs the anger and tension -- as opposed to past records where it's delivered through the lyrics.

One thing I do well is taking a complex idea and presenting it in a simple way. I wanted to take things that [someone like] an Arca does -- something on the more experimental side -- and make it [more accessible]. Sometimes that shit goes over a casual listener's head. I wanted to bring it into a place that lets people know you can do anything with this.

The Constitution's second amendment: How do you read it and how does that inform the EP title?

The reason I named it The 2nd Amendment is because it's the most controversial one. That amendment has been used and manipulated in so many ways. I feel like the wrong type of people practice the second amendment too often. Black people don't practice it enough.

A lot of n*ggas I know don't have a conceal carry permit or an open-carry. They don't want to go through the process. I get it, but if more people affected by police brutality and that type of shit practiced the second amendment, then we might be safer. It could improve things.

When I read Trump's website, particularly his position on second amendment rights, I can't help but feel as though it's all written in coded language that indicates to racists that, under his presidency, it will be legal for people to hunt "gang members and drug dealers."

Gun culture and the NRA have always had coded language against blacks. And part of the reason some people are so dedicated to keeping their second amendment is because they believe it gives them the right to kill black people with no fear of repercussions. As a gun owner myself, I can confirm that the rhetoric Donald Trump is using in regards to Americans' right to bear arms is definitely an unspoken coded message of solidarity with people who just want to kill black folks they don't think are worthy of being part of their great country.

I've seen it from inside the military. I've seen it overseas. I've seen it working in the South. And I've especially seen it in the middle class. Having the right to kill who they want or protect what's theirs is a racist way of keeping an anti-black rhetoric alive and Donald Trump is not stupid. He's playing right into that.

"#Trussmidaddi" will likely be heard as controversial for the Dallas commentary, but the far more devastating moment in that song is the minute of Freaky screaming "Don't Shoot" to sounds of gun blasts.

It's horrifying. When he first sent it, I thought it was funny as shit. But it's actually terrifying. This might be the scariest shit I've ever heard on record.

That was his idea. He had a verse on there at first. I wrote my verse months ago, but I added in the shit about the Dallas cops. He heard my verse and was like "I got to take my shit off." He hit me back up and it was just him screaming "don't shoot" for like 30 seconds or something like that. At first I was like, "umm what is this?" I put it on there. I didn't get it at first. Then I started to realize it was genius.


Why did you feel it necessary to add the Dallas comments to your verse?

There were two or three shootings [of unarmed black men] before the Dallas cop shooting and everybody was really fed up that this crazy shit keeps happening. Even Drake said something. Kanye said something. All these people that never usually make a statement, made a statement. This is enough.

I felt it too. As a black person you see that shit enough times and it just fucks with your head. You think, "ok, when am I next?" Especially back to back like that.

When the five cops got shot it was clearly out of control. I heard some rappers say borderline right-wing rhetoric to address the shit, like saying "all lives matter." Even Beyonce releasing a thing about the cops after the Alton Sterling shit—that's all fine, but it just feels like it's playing both sides. [Still,] I don't believe that those cops should have been shot.

I think I am, but that's the part about me that's most compelling. I take a stance on things. I can also contradict myself. I contradict myself a lot. I think me being contrarian is a strong part of my personality. It just makes me human. Everything I do on record is an exaggerated version of the real me. I'm not doing it on purpose, it just happens I guess.

Right. It's not for the sake of shock.

I never say crazy shit like "I'm going to fuck a dinosaur," just to shock people. Anything I say is something that's going on in real life. You can trace it back to some real shit that actually happened and that's the scary part. It can actually happen to you.

I'm trying not to sound like Young Thug in this interview. Like, "yo, I shock n*ggas with real shit." Whatever. It is how it is. I'm just using facts and they are shocking without me. I'm irrelevant to it.

YG took the strong "Fuck Donald Trump" stance. Your track "I Might Vote For Donald Trump" suggests you're flirting with the idea of voting for him. You serious about the potential of that endorsement?

When we came up with "I Might Vote For Donald Trump," [it was because] we just saw a lot of songs that were like "fuck Trump." We feel the same way -- but, let's turn the mirror on the voter. Why is it even legal to vote for a n*gga like Trump? He literally got on stage and said let's build a wall to keep Mexicans out. Anybody else who says that would get kicked out -- they wouldn't even be allowed to run.

So you know what, I might vote for Trump. This is a moment in history. Donald fucking Trump could be president. I want to be part of that. I got the sticker. I did that.

It's almost like, not really that we want to vote for Trump, but more like why the fuck not? This whole thing is a shit show anyway.

Exactly. I might be down with that shit. You never know. In actuality, we don't like Trump. We're just playing devil's advocate. It would just be too easy to simply say "fuck Trump, he can kiss my ass." He hears that every day. What would make him question what the hell is going on?

photo by Micah E Wood / courtesy of the artist