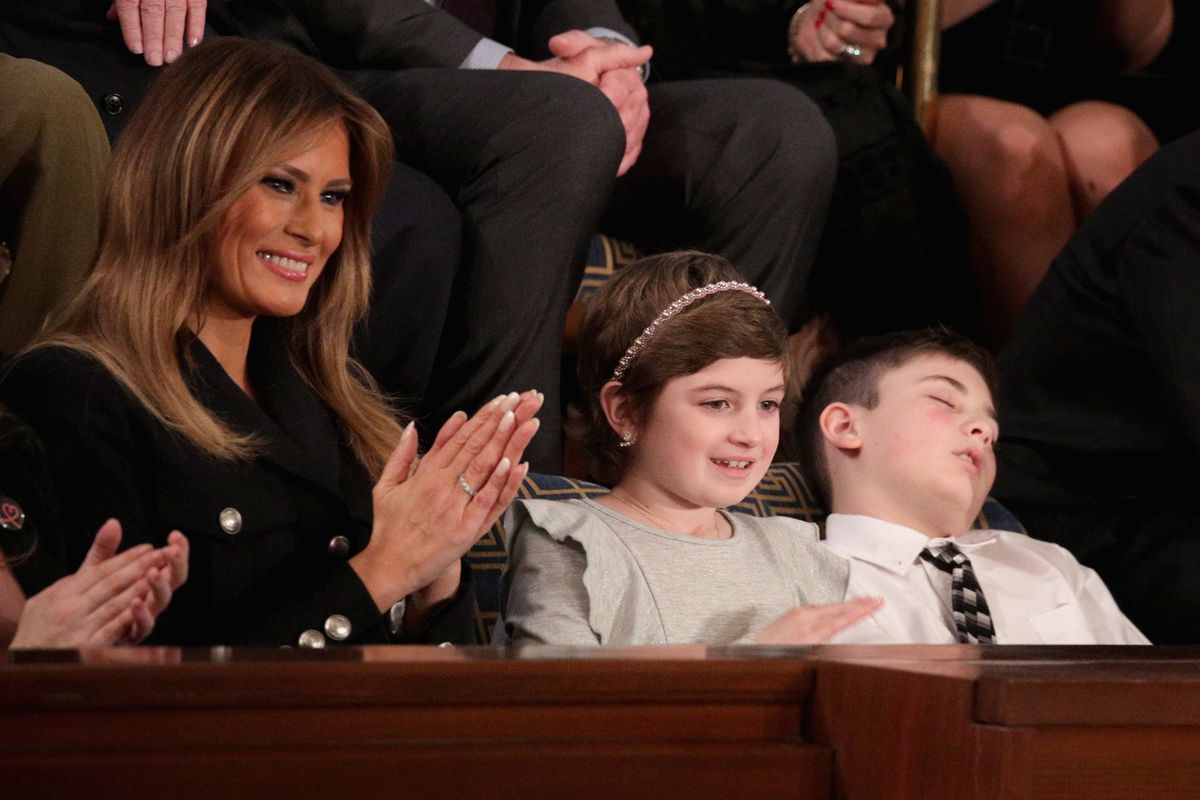 Joshua Trump Catching Zzz's at the SOTU Is a Big Mood

Remember when First Lady Melania Trump proclaimed in a recent interview that she was the "most bullied person in the world?" In an effort to address the validity of this, but mostly to challenge the rise of cyber bullying, Trump launched her "Be Best" campaign last year as one of her first national initiatives as First Lady.

At the start of this week, it was announced that 13 Americans, who serve as "in-person surrogates" for the president's policy agendas, would be honored guests attending his latest State of the Union address. The youngest of the crop was 11-year-old Joshua Trump, who was the First Lady's plus one because he, as the White House states, "has been bullied in school due to his last name." So naturally, the invite fits her campaign which "encourages everyone to be kind to each other and treat each other with respect in everyday life and on social media."

While our doubts about Be Best remain — from its suspect grammar, its lack of actual, recognizable policy, that unfortunate trip to Nairobi during which Mrs. Trump adopted British colonizer garb, plus the most obvious fact that her husband's presidency hosts his own platform of online bullying via Twitter — maybe inviting young Joshua was an earnest step forward? Or is it a way of saying "don't be mean" to people named Trump? Regardless of the First Lady's intentions, Joshua is admittedly in a tough position, having an unfortunate surname as it coincides with a polarizing political climate, and he's one of a reported 4,788 Americans bearing it.

Anyway, the State of the Union went on as planned last night. We'd rather not focus on what was said and let the rebuttals and reactions from politicians ranging from Stacey Abrams to Bernie Sanders speak for themselves. But we can note that at some point, just as Trump, amid calls of "unity," was gearing up to talk about his multi-billion dollar border wall that motivated the recent month-long government shutdown, young Joshua checked out. Like, full REM cycle style. Can you blame him? Obviously, the Internet caught on, and Joshua is now something of a hero.

Consider how dull it might be, despite the honor of being invited, for an 11-year-old boy to sit quietly and listen to hours of adults talking about politics. Literally, though: Trump's SOTU address last night was reportedly the third longest in American history, clocking in at just over 80 minutes. Honestly, I fell asleep in my pasta dish while trying to watch, and I know I'm hardly alone.