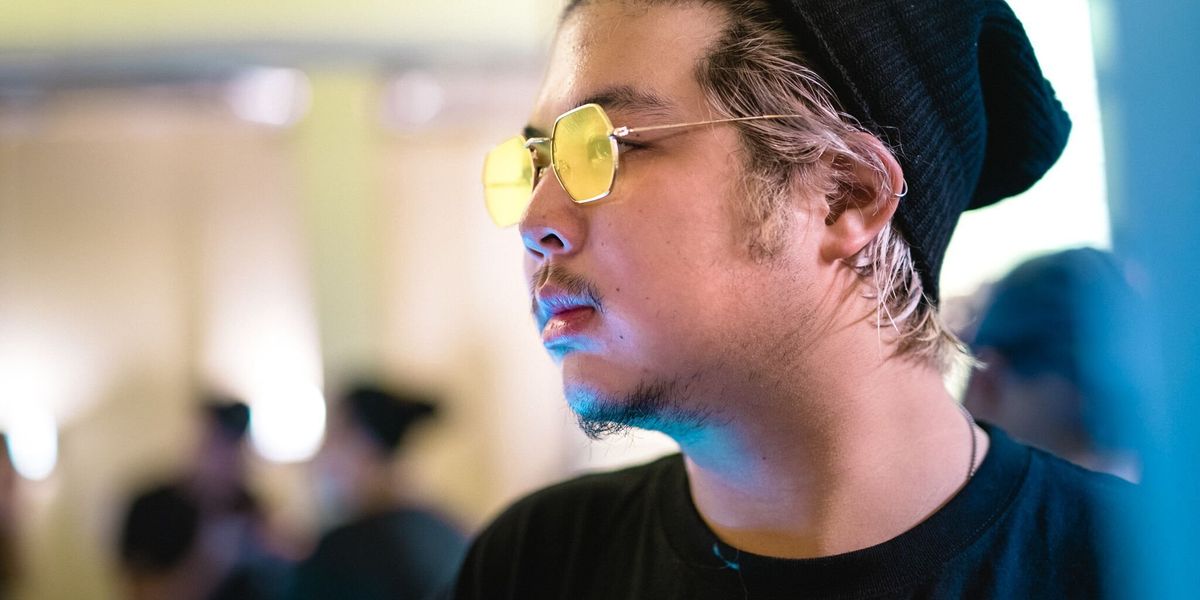 For a while, no one knew exactly who Josh Pan was. He was believed to be an anonymous collective of 20 artists, a theory that was ultimately debunked as an Internet hoax. Now, the Taiwan-raised, New York-based artist is making waves under his real identity. He signed to Skrillex's Owsla label in 2015 and has since toured with artists like graves and Y2K. He has collaborated with electronic mainstays like Abra, and his mixtape If You're Reading This You're Josh Pan has been streamed more than 3 million times.

Pan just released a new track, "Wait For Me," in collaboration with producers X&G. The electronic-rock song pairs his smooth baritone with soaring guitar and gravely percussion. In conjunction with the new track, and in honor of Asian American and Pacific Islander Heritage Month, Pan has curated a playlist for PAPER that features some of his favorite musicians from the Asian diaspora, and explains why.

Pan says of curating the playlist, "Even though there are a few others I would've included in this playlist, I decided to choose artists and songs that bring me back to moments in my life. These artists have both influenced my perception of music and life in some way. Looking back on this list, I'd say that it's fascinating to see how quickly Asians have grown in the music industry (and in entertainment as a whole). When I was growing up, there were a few famous Asian actors in the States and now we have Asian artists on almost every festival line-up. I'm excited to see different people popping up from every culture and corner of Earth. It's all super inspiring."

Mr. Carmack has always been a huge influence on me. I love his attitude and versatility and how he's able to be a free-spirited creator that knows no boundaries. He's one of the greats and inspired me to drop a lot of music and push boundaries. This track "Vanessa" is just vibes and Carmack's songs are always perfect. i could listen to his music for hours and on long drives/flights.

​"Side Effects" by Cehryl

This girl is incredible. When I found her the first time, I think I listened through her entire discography at once and was pretty mind blown. She's a great writer, plays multiple instruments, and just gets it. Her songs bring me somewhere else. This soul/RnB track is so good. Can't even explain it. It bring me backs to vibes like Lauren Hill, Erykah Badu, Norah Jones and John Mayer all at once. That might not make sense, but it sort of feels about right to me. Seeing another artist that grew up in Asia write such amazing music in English is cool, too.

I grew up listening to Jay Chou. He's one of the highest-grossing Asian artists of all time and consistently sells out every stadium he plays. He's written so many songs that have become classics to Mandarin Chinese music listeners all across the world, and his songs definitely were a big part of my life for a long time. Even though I don't like some of the things he's been working on in past few years, he's a legend and is kind of like the Taiwanese Kanye.

If you don't know about joji, he's an interesting artist who transitioned from being a crazy YouTube creator/performance artist/Internet personality to being a songwriter and a performer. I've known him for a few years now, and it's nice to see that he's doing what he wants to do with his career. I love the artists he works with on his videos and visual stuff as well. Joji shows that you can switch scenes and career paths if you put in the effort.

west1ne is a Korean-American from NYC. He's one of my favorite producers of all time and deserves way more recognition for his work than he gets. He's an OG and has been making music for a long time now. When I first heard his song "Tonight", I think I listened to it 10 to 15 times on repeat. It was magical. "Clinch" is another amazing track. His flow combines so many elements and I always tell people he's the Mozart of Soundcloud.

I had to find a way to squeeze in a few of my favorite Korean artists into one song. I had the pleasure of making this song with all these legends on a 2015 trip to Korean with Skrillex. It was a super memorable trip and I was really drawn into Korean fashion and music ever since then. I've always enjoyed working with Dumbfoundead and definitely gained a lot of perspective from all of these guys. It's crazy how much Asian music has become a force in the industry.

I'm always going to be rooting for Brian. I love how he came to the States and was able to connect with people like Post Malone and Pharrell pretty much instantly. He's so young and has a lot of possibilities in front of him. This is probably my favorite from him - I was listening to it a lot when I was in Australia last year on tour. He's also a jokester at heart, so I can relate to the way he creates/posts. I hope he keeps evolving and killing it. He is one of the fastest growing Asian artists globally right now.

I love pretty much anything ZHU makes. When the artist can drop anything and it's guaranteed fire because of his taste/voice/techniques, he has a spot in my head. "Paradise Awaits" is the ZHU track I've played out the most in my sets. He's quality & a master at what he does. If you hear a ZHU track, you know it's him.

"Fixed On You (Taiki Nulight Remix)" by Hotel Garuda

One of my favorite bass house (or house in general) tracks ever. Hotel Garuda have been friends of mine for years and their DJ sets are always a lot of fun. Going b2b with them on the decks is always interesting, too. Taiki Nulight is a crazy producer who releases on AC Slater's label, Night Bass, and I really enjoy his take on house music. He's sick. And they're all Asian.