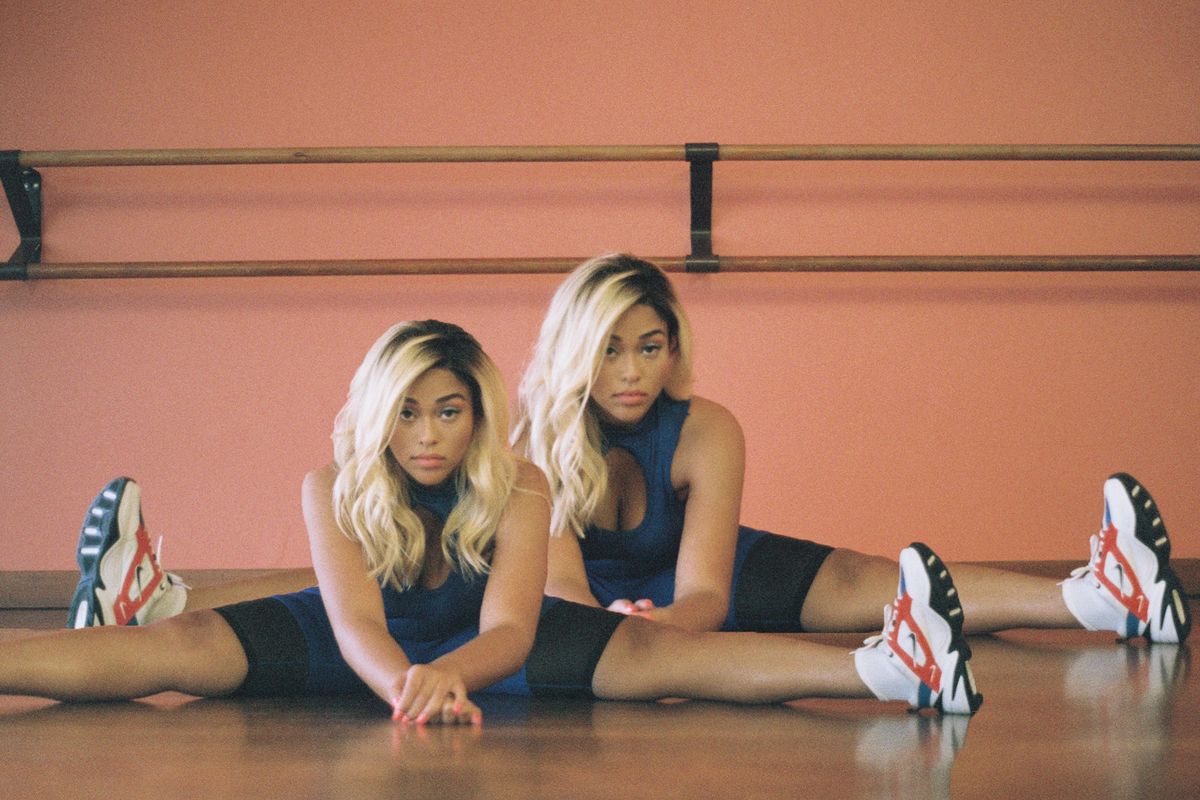 In her circle, model and girl about Instagram Jordyn Woods isn't the most effusive about her own projects. Granted, she runs in a pretty insane crew with friends like Kylie Jenner and Jaden Smith. But this week, things took a turn as she geared up for the launch of her own fashion brand SECNDNTRE, which released today its debut 24-piece activewear range.

"I've done many collaborations in the past," Woods told PAPER this week before hosting a poolside launch party in LA with Kylie and Jaden both in attendance. In the past she's partnered up with Addition Elle, Boohoo and even Barneys on product. "But this was really a blank slate; I didn't have to go off of anyone else on what was possible and what was not possible. I really could just put all of my thoughts into something and create it. It's like a child."

With the name SECNDNTRE ("second nature") that "child" comes as a direct result of a tough time Woods had last year after her dad died. After using fitness as therapy, her eyes were opened to the lack of quality workout wear, available in a variety of sizes that also was affordable. Enter this new range of color punching, slightly retro-influenced pieces in sizes XS to XXL all under $80.

"I really wasn't supposed to but I tried on every single item," Woods said of working on the project. To make it come to fruition, the model partnered with Instaco who also is behind lines for Nicolette Mason, Gabi Fresh and Jenn Im. "I was like a second fit model because 1.) I was excited but 2.) I wanted to make sure everything fit right. I wanted to make sure that everything wasn't see through. I've been working out at the gym before and my trainer was like, 'You know your leggings are see-through.' That's embarrassing!"

Over the span of the whole process she kept her cards pretty close to her chest, not even showing the pieces to BFF Kylie until this week. Since, the makeup mogul (Woods will be partnering up with Kylie Cosmetics on some product in the future), has shown the line some love on Snapchat.

But if practicality and quality was important in the line, so was fit. Woods has made a name for herself speaking out about body positivity as a "curvy girl." As such, it was important that her fashion line reflect that stance, making sure to incorporate extended sizing from the start, particularly in an industry that can sometimes say it's more difficult or expensive to do so.

"Being a curvier girl, it's easier for me to design things for curvier women."

"I think a lot of people say those things as excuses because they are comfortable or they're scared or they just don't really care to expand," Woods said. "If you go into it knowing that you want extended sizes you can create things that work for all body types. Being a curvier girl, it's easier for me to design things for curvier women because I fall in that category so I was already thinking about that going into it."

That sort of idea was brought into the cutout bodysuits (which can function as swimsuits), as well as the line's tracksuits, which easily could go from the gym into daily life. But among the line's key items is a legging with a built-in waist trainer.

"I had really never seen that before," woods said of the design, which was her own creation. "When I work out, I wear a sweatband and it keeps your core tight and maximizes your work out. I wanted to sort of kill two birds with one stone and create a legging with the sweatband in it because I'm always forgetting mine or I leave it at the gym." That design is available as a biker short and a legging.

The launch is really only the beginning for Woods, who says that she will be taking feedback on social media and from fans on the venture, now that it's out in the world. Fans can expect new product every few months and before long, who knows, it could become a fully realized lifestyle brand.

"I think with any goal you have, you should want to be the best at it so I really just want to keep expanding and growing the line," Woods said. "There's so many examples around me of entrepreneurs and people I can draw inspiration from through their work ethic and how they do it. You know, my best friend [Kylie] is a huge entrepreneur. She's so inspiring. I think I have a great team and through my surroundings and people around me I've learned a lot of different things like a sponge. I take it all in and see how I can do that in my own way."