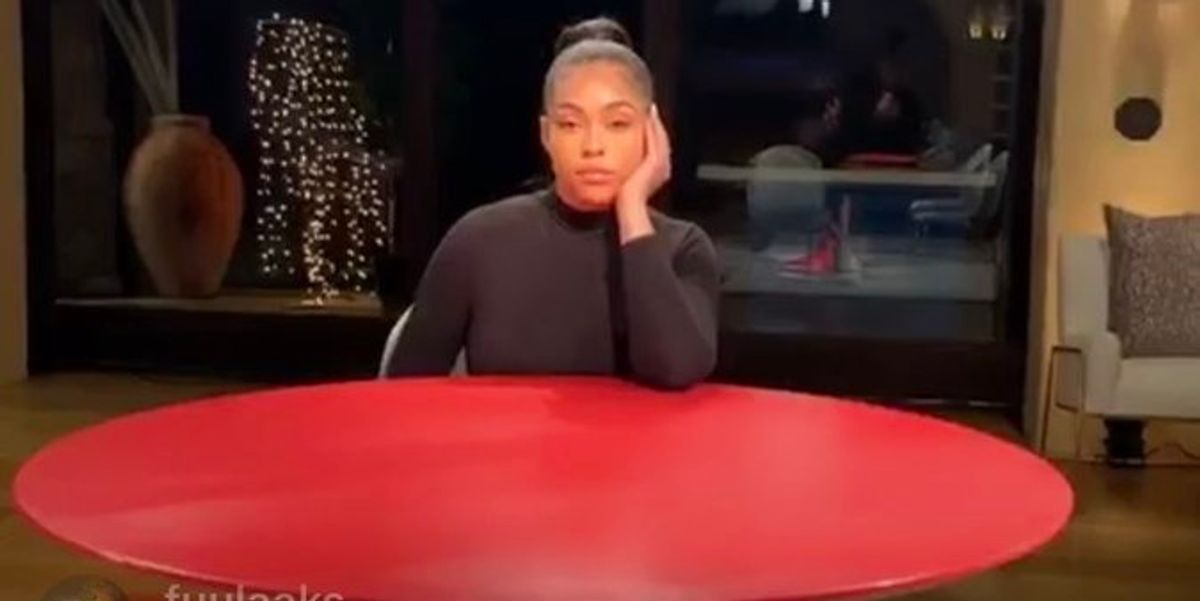 Woah, okay. Numerous Instagram users are reporting that Jordyn Woods — former BFF of Kylie Jenner, recently thrown out of Calabasas for risking it all and allegedly hooking up with Khloé Kardashian's boyfriend Tristan Thompson — hinted at an upcoming appearance on Jade Pinkett Smith's Red Table Talk during a brief Instagram Live story this afternoon.

Appearing live only for a few seconds, Woods can be seen sitting at the eponymous red table. She looks ready to, well, talk.

If a Red Table appearance really is on the cards, that's interesting. We're yet to hear Jordyn's side of the story, save for one awkward public statement she made while promoting her new line of false eyelashes. The Kardashian-Jenners are also yet to formally comment on the alleged betrayal. If Woods really is out of the family for good, a tell-all talk show appearance could be her opportunity to take control of her own narrative, and establish a new career phase. She's been getting a lot of heat from angry Kylie and Khloé fans over the past week, and has reportedly lost her stake in a bunch of Kardashian business ventures.

Theoretically, Woods is about to spill tea hot enough to burn down several Calabasas mansions. Then again, would Jada actually book Jordyn without permission from Kardashian matriarch and business mogul Kris Jenner? Surely not. She and Jenner are friends, and close ones at that. Remember when Jaden Smith dated Kylie? Pinkett Smith attended an intimate Valentine's Day dinner at Jenner's house in 2018. Perhaps to help plot 2019's defining celebrity scandal?

Not that Woods and the Smith family don't have close ties of their own — Jordyn's father John Woods was a sound engineer on The Fresh Prince of Bel-Air, and she has sometimes referred to Will Smith as her "uncle." If she was going to retreat to another famous family post-Kardashian, the Smiths would be a good pick.