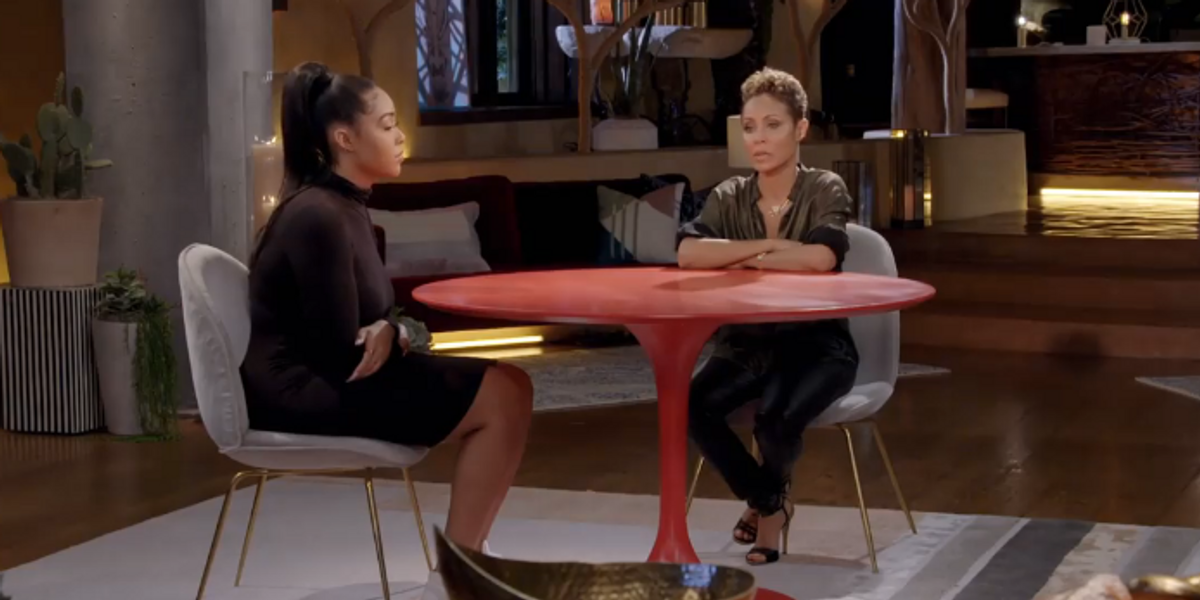 What We Learned From Jordyn Woods' 'Red Table Talk'

After what have no doubt been the worst two weeks of her life, Jordyn Woods — former BFF of Kylie Jenner, recently thrown out of Calabasas for allegedly hooking up with Khloé Kardashian's boyfriend Tristan Thompson — just starred in an episode of Jada Pinkett Smith's Facebook Watch show Red Table Talk to spill some tea. The low-key interview made for surprisingly soothing and poignant viewing, adding some nuance to a very tabloid-y Kardashian scandal.

Woods is close family friends with the Smiths, and clearly felt comfortable to speak her truth. Will Smith, who worked with Woods' late father on the Fresh Prince of Bel Air set, also made a supportive Facetime cameo. Both Smiths framed Woods' alleged indiscretion as the understandable sort of mistake that many 21-year-olds make after having a few too many drinks. Lena Dunham concurs.

The big takeaway of the interview is that Woods says she never intended to hurt Khloé or hook up with Tristan in the first place. But she said Thompson did kiss her goodbye as she was leaving a party at his house around 7AM on Monday February 18. She said the circumstances of the party were "innocent" and strongly denies anything else happened between them. She added that sleeping with him was "never even a consideration."

"[There was] no passion, no nothing, on the way out, he just kissed me," she recalled to Smith. "It was a kiss on the lips, no tongue, no making out, nothing. And I don't think he's in the wrong either because I allowed myself to be in that position, and when alcohol's involved people make dumb moves."

Getting into a car afterwards, Woods "didn't know how to feel."

After this she says she went home, and told both Khloé and Kylie that she'd attended a party at Tristan's house, leaving out the kiss: "I tried to forget that part of the story and I said he was chilling... there were girls there but [Tristan] wasn't all over the girls."

This is apparently Woods' big regret. She says she held back from telling the truth because she knew Khloé and Tristan had already endured a cheating scandal previously: "I was honest about being there but not honest about the actions that had taken place. I knew how much turmoil was going on and I was like, let me not just throw more fuel on the fire. I was trying to protect Khloé's heart... The last thing I wanted to do is be that person. I'm no homewrecker. I would never try and wreck someone's home. Especially someone I love, someone with a beautiful daughter. I was never trying to steal someone's man...I hurt so many more people by not telling the truth." She added that she has since apologized properly to Khloé about what really happened.

This is all very compelling, but Khloé is apparently having none of it. Right after the episode aired, Kardashian called Woods out on Twitter, disputing her version of events and saying she is yet to receive a private apology from Woods about what occurred.

During the interview Woods also said she'd endured abuse from the media and general public since TMZ broke the scandal, and wondered whether race had played a role: "They're putting their focus on a young Black woman who made a mistake and not a mistake that's worth public crucifixion."

Smith agreed with her. "You know what they say? Black women can be among the most disrespected and disregarded creatures on earth... It's so easy to target Black women even if there's other people involved," she replied.

Something else worth noting: Woods denied the popular theory that this whole thing has been a big ol' Keeping Up With the Kardashians publicity stunt. "Unfortunately it's my real life and real people are hurting," she said. On that point at least, Khloé probably agrees.

Watch the whole episode, below.