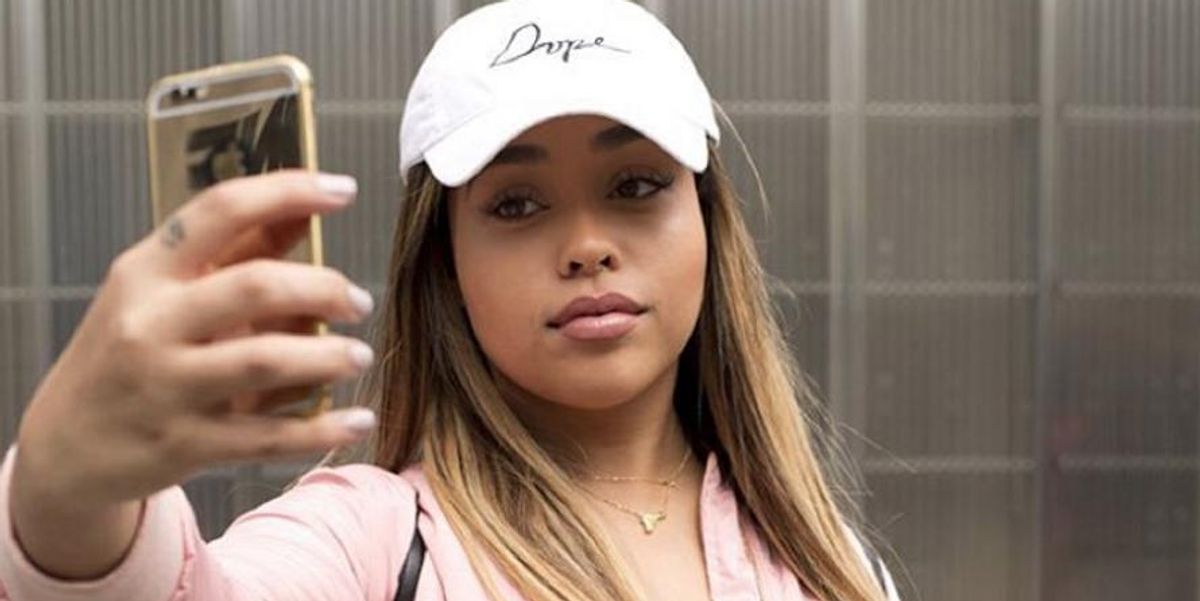 
The last couple of months have been a whirlwind for Jordyn Woods, the former child model who signed with Wilhelmina's Curve division in late November. Shortly thereafter, the 18-year-old moved to New York and began booking work with some of the biggest glossies in the game from Galore to Complex -- and in just a few weeks, she's grown comfortable with posing in front of the camera again. Granted, she isn't new to this whole fame thing, as her support group includes Kylie Jenner and Jaden Smith, who definitely have their share of paparazzi snapping their pictures at every turn. She's also currently amassed over 700K Instagram followers -- a responsibility that Jordyn takes seriously but doesn't let detract from what she's trying to do with her career off line. We chatted with the model about the business, creating her own clothing line someday, the culture of comparison that social media fosters, and more.

HEIR JORDYN on Instagram: “I hope everyone had a great Christmas and spent it with the people they love. I'm ready for this new year...”

How did you start modeling? Were you scouted? Did you go to an open call?

I signed with Ford Models at age six and modeled with them until age nine. I didn't really do that by choice, as I was too young to make my own decisions then. I hadn't really thought of getting back into the industry until I got an email from Marissa -- my agent at Wilhelmina. She and the company were interested in having me as a Curve model so I thought, I'm 18 years old and should try this out.

Was it Wilhelmina and your agent there talking to you and walking you through the possibilities that made you decide to pursue modeling again? Or were there other people who gave you that push to go for it?

I was definitely a bit skeptical about it initially. I picked up and moved to New York with no experience [basically], since the work I had done as a child. Meeting my agent Marissa made me feel so pumped about modeling and she gave me so many pointers and tips. She saw something in me that I didn't wholly see in myself at that moment, so she brought out a more confident side of me, without a doubt. I was surprised that it was already hidden in me, but she absolutely brought it to life.

When it comes to some of the surprises of modeling, we frequently hear that models have pretty different views of the industry before and after they get into it. There's surely a big difference between modeling as a child and as an adult. So what have been the biggest surprises for you (both good and bad)?


So many models go to castings and look down on themselves when they don't get the job. Throughout doing this, I've learned that casting directors already know what they want. If you don't have that or don't meet those criteria, it truly isn't you: you simply don't meet the specifics of what they're looking for. The modeling world is harsh and there will be a lot of sacrifices you'll need to make, but it's all paid off for me so far. It's all worth the experience. This is also a new city for me and overall I've grown so much within just a month of being here.

I will say that most expect the industry is incredibly glamorous and that models spend most of their time trying on clothes, posing, and looking cute. Don't get me wrong: there are definitely those amazing moments, but there are also times when you're shooting outside and you're freezing or when you're having the worst day ever, but have to be on set smiling and in the best mood. It isn't easy—people assume that because so much of the job is based on appearance and making it look effortless. I even get a ton of comments on my Instagram that say "How could you be a model when I've been working so hard to get in the industry for years?"

You signed with Wilhelmina only a couple of months ago, but have there been any shoots or campaigns you've done thus far that you're incredibly proud of?

I'm proud of everything I've done so far and I'm learning something new every single time. I shot with Galore yesterday and I was so excited about that because they're a bit on the edgier side. I have a lot of love and respect for their magazine. I'm also shooting with Complex tomorrow so I'm looking forward to the looks I'll be wearing and their vision. A week ago, I shot on the beach for the first time and I loved it.

I do realize that I've hopped onto this wave when it's being talked about and focused on. There's still a lot of work that needs to be done in terms of perception and I hope I can be a part of making that change. I haven't really met a lot of other curvy models yet, but one of the people I shot with in New York City has been doing curve modeling for quite some time. She helped me so much: as my photographer and as my teacher for poses and tips. She was an immense help and a complete boost of confidence. It was my first time modeling in underwear and I didn't feel uncomfortable at all, because of her guidance.

How do you feel about terms like "curvy" and "plus size"? Especially as there are both advocates for the term and people who want to ban it?

I just met a guy who confessed that he has been stalking me on Instagram, [and said] "I think it's strange that they call you a plus-size model, when you're just a thick girl." I laughed because technically you're plus-size in the modeling world once you're above a size 8. I take no offense when I'm called "plus-size" because I see girls who are incredibly healthy, toned, and fit and they fall under the same category that I do. If anyone should be slighted by it, it should be women as a whole as it places such a narrow standard on us all. One of my friends wants to be a model, but is scared to pursue that because she's a size 4 and would either have to lose weight or gain weight to belong.

Do you have advice for younger girls trying to get into the industry? Or girls who even just want to be more body positive?

You don't have to listen to what people say. If you want to model, get in front of the camera and take dope photos. Nowadays, everyone wants to be a model, so if you've got it why not? You can even be scouted on Instagram. Every single answer you're searching for can be found within yourself. Whether you want to model or paint or make music, you should try it. Life is way too short to not. Don't allow any other person to dictate what you dream of doing. With modeling, you'll either fall in love with it or realize it isn't what you want to do. But the worst thing you can do is not try it. I'm all about the "Just Do It" motto, so I guess I should be sponsored by Nike. Your individuality is the greatest thing you're given. People who go against that are usually insecure and jealous.

Who are a few of your favorite leaders and influencers in the body positive movement?


I actually just followed Barbie Ferreira on Instagram. She is signed to Wilhelmina Curve as well and just did a campaign with Aerie. I love that she owns who she is and I love her message: it's so positive. The idea of not retouching any photos is awesome because she's helping others to feel comfortable. We also have so many feminists and activists in my generation who are gaining popularity and I like that. I try to spread as much awareness as I can as well. I love coming across people who have positive and uplifting things to say because it isn't always easy to find that.

There are a lot of good and amazing things on social media and you can seek out little boosts of confidence. Some are making such a wonderful impact. But sometimes the negativity, and noise, and trolling overpower that. For millennials, we deal with the culture of comparison which can be quite dangerous, so a healthy balance is necessary, but it's hard.

People can just hide behind the Internet and say whatever they want. I was born right before the technology wave, so I've lived my life half-in and half-out in a way. I am definitely a child of the Internet, but I do realize there are other things outside of it and that it creates this false sense of reality.

I won't lie: there are times when I'm feeling sad and I look on the Internet and gawk over a girl's beauty or her hair. And I get over it and get back to making myself the best person I can be. But it's so easy to get trapped in that world of comparing yourself. And society makes us all feel like we should be in competition with one another, but I don't believe we're put here to compete.

What else is in store for you for 2016? Are you going to NYFW and walking in any shows or just sitting front row and taking it all in?

Nothing is set in stone. I don't think I'm working NYFW this year, but only time will tell. Everything always happens so last-minute in the modeling game, but I am hoping to at least be there and see what designers have in store for the season. It's something I really need to pay attention to now: I need to keep up with all these trends! Eventually I want to have my own line at NYFW, so I want to observe everything now and take it all in.