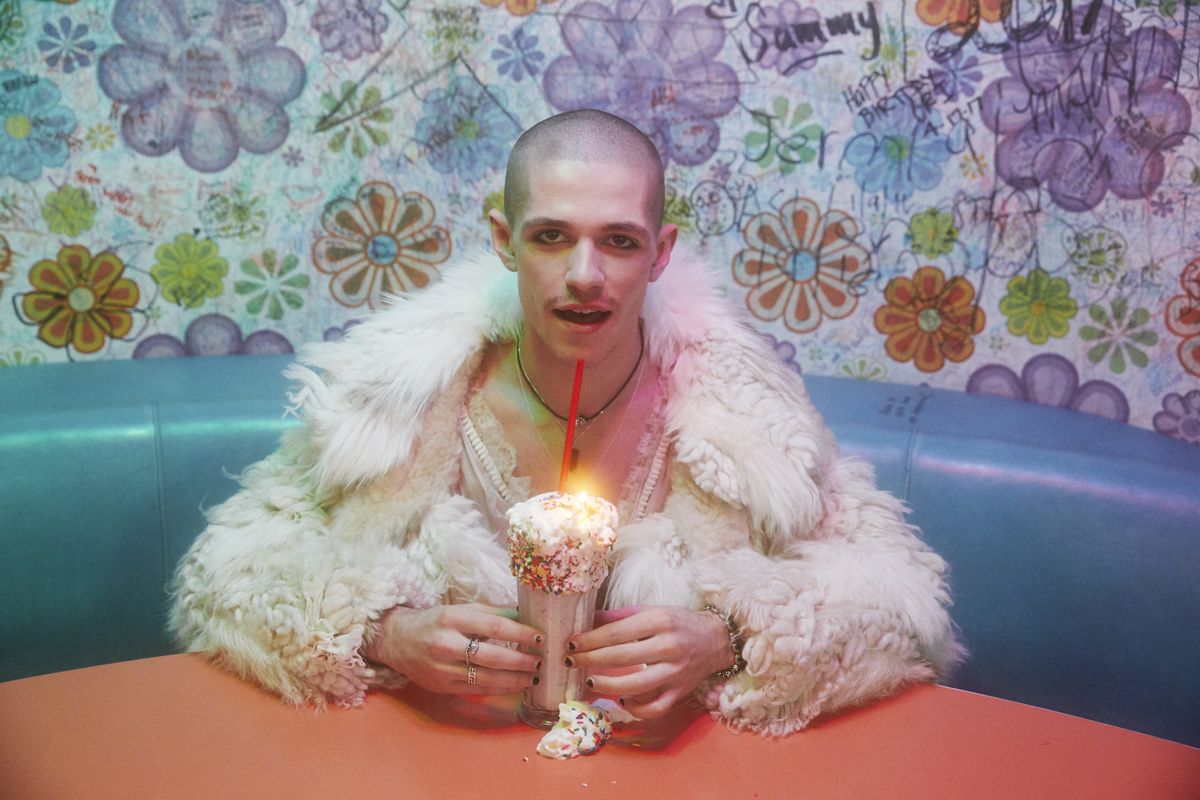 Jordan Robson has a talent for alchemy. With a trained background in classical ballet, he discovered how to make clothes move as a model. The connection between fashion, dance and photography that he witnessed happening on sets inspired him to explore movement directing, a form of choreography that focuses on the natural ways our bodies inhabit spaces.

As a performance artist with London's Theo Adams Company and a self-made movement director of his own right, Robson channels his creative energy into helping images and video come to life. Robson works with a wide range of creative types, models, dancers, actors, performers and photographers. As he says, "You don't have to be trained. Everyone can learn to move in a different way."

We caught up with Robson to chat about dance, fashion, femininity and why London is a darker place than New York:

When did you start dancing?

I actually started quite late for a dancer, I was 15 or 14. And I just started once a week, doing contemporary class. And then I always said I was going to be a lawyer, and I didn't realize I could have a career in dance until I was about 16 or 17. After school I got a job offer at a company in London, called Ballet Boys. Terrible name, but good company. So at that point, I thought, "Oh my god, all of my dreams have come true." I always wanted to be a dancer, go on tour and travel the world.

And then, something like last year, maybe even a bit before that, I stopped and took note that maybe this isn't what I wanted. And then I did a shoot with Tim Walker, along with Emma Watson for Vanity Fair. There were all these huge looks, and Emma was in the changing room for a long time, for personal time if she wanted to read or take a nap or something. First I was employed as a dancer, but then because there's all this free time and we wanted to be productive, we started staging what was going to happen next — where Emma would go and what it's going to look like. I was kind of astounded, almost, just talking about it and being creative with him. I really loved it. It was kind of a happy accident; a push into a new direction. From there I decided that it was the next step.

What was is about a dance career that you realized wasn't appealing to you?

It's hard work, but I think that you're prepared for that in the beginning. I think as a dancer you spend so long trying to get somewhere. Training, and auditions — it's quite ruthless. And you get there, and you're expected to do something else, but you're always working for somebody else. I think dance is a super personal thing, and for me it was not having much say or any input, and I wanted to get my creative juices flowing. I didn't have that much input at all, or any artistic expression.

How did that epiphany on the Tim Walker set translate into what you're doing now?

I got really interested in working with films and videos, because that's where I think a lot of stuff is headed, and photography is never going to not do that. More and more, you see dance in music videos, all over television, and in the background of singers and performers. And then I'm also really super inspired by the old McQueen shows — there's so much movement. Runway shows aren't what they used to be anymore. They used to be so spectacular. Now a lot of the time it's just white walkways and walking around.

They say the best models are the ones who can dance.

I think for people that want to sell clothes, you'd want to have somebody that can move and show it off the best. Because it's the way you move in clothes, or the way your clothes move when you're in them. It's so special to have it crossover.

And now you've moved into the performance art space.

For such a long time I just said that I was a dancer, and not that there's anything bad with being just a dancer, but I felt like I just wanted to do more. Now I do a lot of performance art with a company in London called Theo Adams Company. They've worked with Louis Vuitton in Tokyo and Fiorucci, and we just did a thing with Halpern in London. There is a dark side, but it's fun. When you say dance, people tend to think ballet or contemporary, well mostly ballet, or hip-hop, and it's very niche. But I feel like performance art to me, you can be more of an artist.

Are there certain themes that you find yourself coming back to often?

Yeah, that's kind of the result of London. It's also part of the reason why I'm so obsessed with moving here. The dark side of London, which sounds so dramatic, is really fun, but it is quite a negative place overall, at least that's how I feel, and I've lived there for five years. You come here, and the energy is so much more positive, there's just so much more energy in general. So much flow to things.

Yeah, to New York. But, on the other side of that, there's such a difference in humor, I think, between London and New York. I think that darker side is more accepted in London. With this company, Theo Adams, we do a lot of crying and staring into the audience and screaming. Lots of lip syncing, but it's very angsty in a way that's quite disturbing, and I feel like that caters toward London. If we brought it here, it would be like, what the hell is going on? I mean, I'm sure some people would love it as well, but as a general audience, I don't know.

Yeah! Personally, when I do it, I always come back to femininity. Just because like, for this photoshoot we did, I wanted to explore skirts and dresses, and the movement qualities of that. It's such a cliché that everyone's mother is such a strong woman in their lives, but mine especially was, so I always feel like I'm drawn to that. I think it's because I've been so pigeonholed as that, for such a long time, being the manly dancer onstage.

Did you feel restricted in that role?

Yeah, especially in my last company. It was an all-male troupe. It caters to the audience, but it was quite commercial, and they wanted hyper masculine strength. Even from before then, I wanted to get away from that.

Was that the ballet company?

Do you have any role models?

I think the great thing about it is that there have been movement directors forever, and I'm really inspired by Les Child especially, who did all the old McQueen shows. And Stephen Galloway in New York does a lot of stuff here in fashion. I work quite a lot now with Ryan Heffington, who produces all of the Sia music videos and many other things. So there are definitely people that inspire me, but there are I think three or four that I know of that do this job. There's not a lot in comparison to the amount of photographers and videographers. There's definitely people that inspire me, but I hope the way I do it will feel a little bit new.