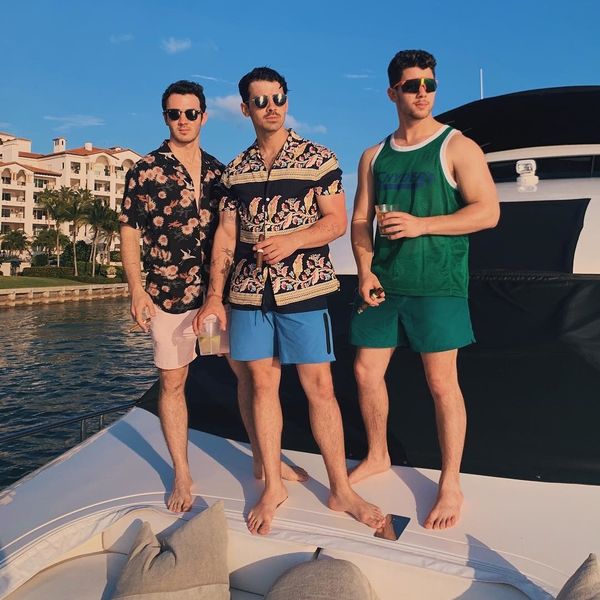 A Decade Later, The Jonas Brothers Will Return to SNL

Ten seasons and ten years after their debut on Saturday Night Live, the Jonas Brothers announced yesterday that they will perform on the penultimate episode of the show's 44th season, with acting legend Emma Thompson hosting.

The band will follow up Shawn Mendes' May 4 performance, but hopefully strike boy band viral gold again, a la BTS' performance from the April 13 episode. The boy band craze is certainly coming back with a vengeance after a brief departure in a post-One Direction era of solo stars. It seems that BTS breaks records almost daily, and old band reunions are happening left and right. Thanks, Ariana!

If the Jonas Brothers' resurgence in popularity tells us anything, though, it's that fandemonium never really left us. The music video for their comeback single, "Sucker," has broken well over 100 million views since its late February debut, and their newest video for "Cool" is on track to do the same. While neither of the songs have exactly given us the feels over the days of "S.O.S" and "When You Look Me In The Eyes," the new bops have been foot-tapping anthems, more in line with their later work on "Lines, Vines, and Trying Times."

Related | The Jonas Brothers Are Total Beach Dads in 'Cool'

Fans are already demanding that the Joe, Kevin, and Nick appear in sketches as well, following their appearance in sketches from their 2009 guest spot and the appearance of One Direction in sketches years later.

There's no telling whether or not they'll actually appear in any bits, but all is usually revealed concerning these types of appearances come showtime. The band has two songs out currently, post-reunion, which sets them up for a perfect two-song set on SNL. Previously, in the show's 34th season, the brothers performed two songs off of their breakout album A Little Bit Longer, "Tonight" and "Video Girl." There's no announcement about plans to release a new song to gain pre-show buzz, but who knows? The Jonas' work in mysterious ways.

Before their big SNL return, you'll be able to catch them on May 1, performing at the 2019 Billboard Music Awards in Las Vegas.