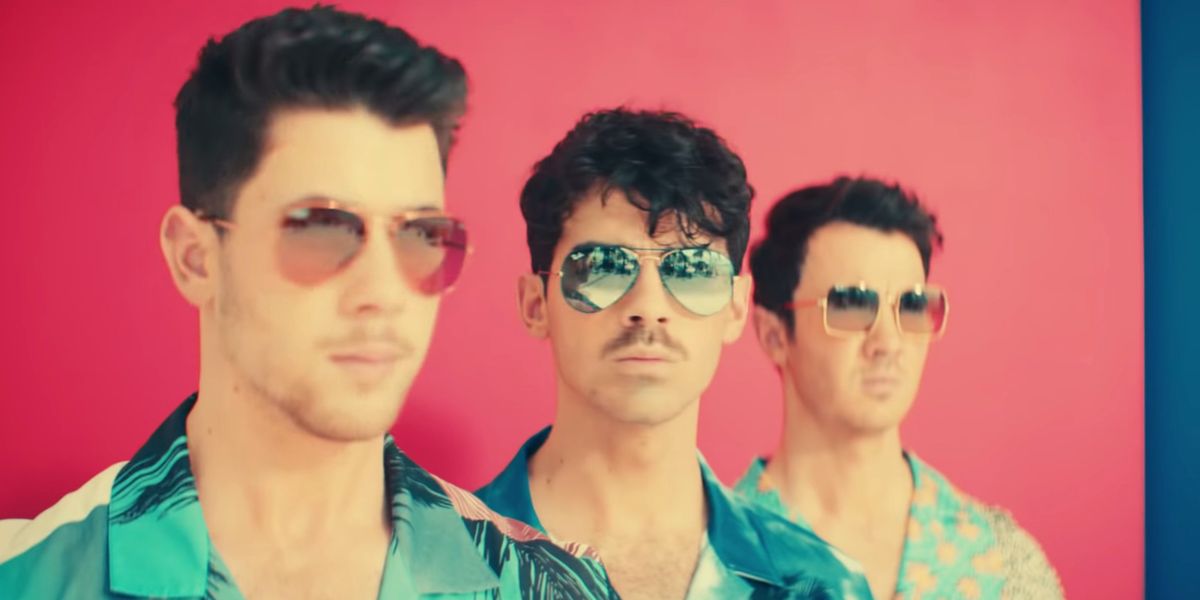 The Jonas Brothers Are Total Beach Dads in 'Cool'

Remember that viral video from late March of the Jonas Brothers, cigars in hand, attempting to two-step on a yacht to Kacey Musgraves' yeehaw anthem, "Golden Hour?" Well, the newest video for their song "Cool" is basically all that and then some. Cue a sleeveless, fanny pack-clad Nick Jonas knocking over a chorus line of beach babes at sunset.

The Jonas Brothers made a comeback earlier this year with the release of their first single as a reformed group, "Sucker," and it made waves on social media, drawing comparisons to Portugal. The Man's "Feel It Still." Their newest song is less alt-pop inspired, though, and more of a beachy, corny bop vibe. Let's be real, Joe owed them one after the success of DNCE's 2015 hit, "Cake By The Ocean." Fans of the classic JoBros will be pleased with the new single as well; it sounds like a mashup of "Lovebug" and "Burnin' Up," complete with a quintessential Nick falsetto.

"Cool" opens with the boys being forced to play a senior citizen's beach blast, but these grannies know how to party. The video quickly transitions to Nick cruising down the street, looking buff as hell in a suit, celebrating his successes of the past year. Joe, rocking a porn stache, steps in to takeover in the next verse. References to Post Malone and fiancée Sophie Turner's role in Game of Thrones even crop up, but the best moments are when he becomes the visual representation of a dad joke. While pouring himself a glass of Bayou rum, he blows off some steam dancing in the sand. Bet you thought you'd never see liquor spon con in a Jonas Brothers video, huh?

The heavy emphasis on Nick and Joe has some fans in the comments asking for an "amber alert" to be put out on Kevin, but have no fear — the eldest JoBro is in attendance, and he's dressed like a ship captain holding two parrots. Oh, Kevin.

The video is ultimately what fans have been asking for. It's playful and catchy without trying to recreate any of their old hits. It's meme-able, it's gif-able, and it's got Nick Jonas' biceps. What more could a "Future Mrs. Jonas" shirt-wearing stan ask for?

Watch the music video for the Jonas Brothers' new single, "Cool," below.