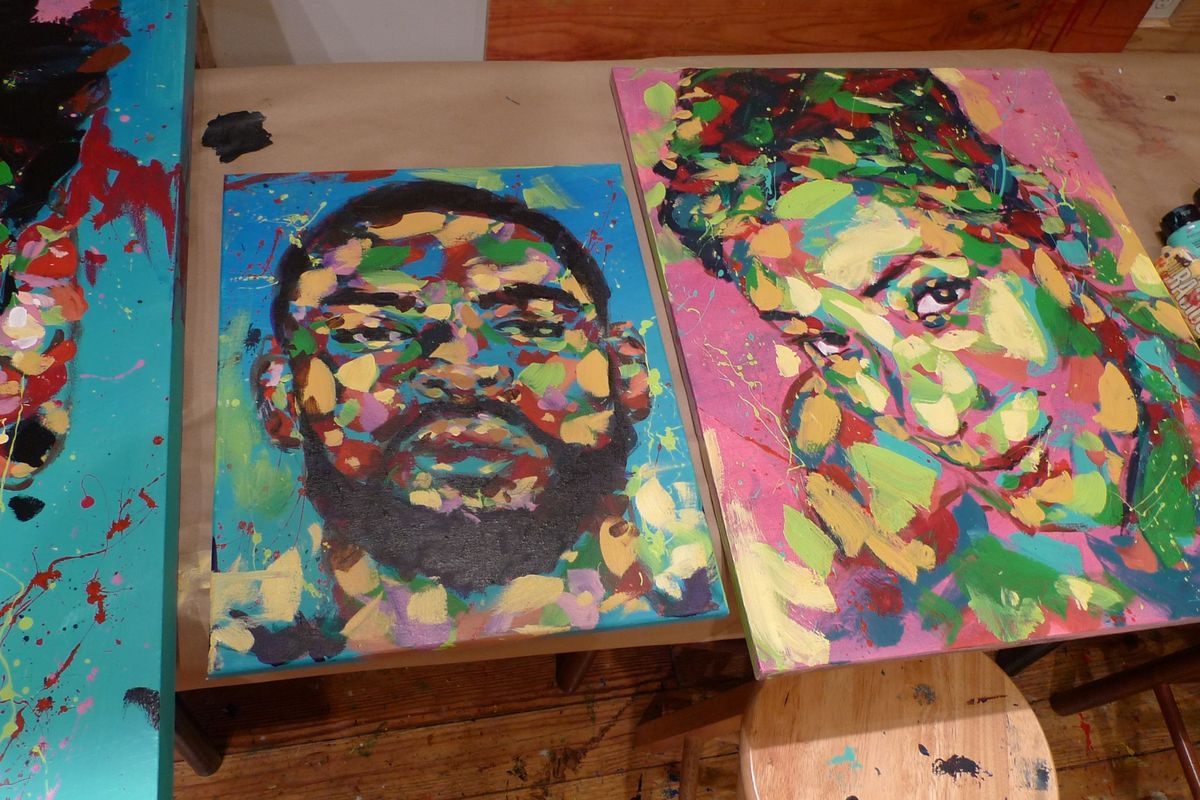 Two skeletons emerge from a car parked on a street in the Bywater, a popular New Orleans neighborhood so close to the French Quarter the sounds of brass bands can be heard in the breeze. Near the car, a group of ghouls congregate by a bar. A pedicab, full of gold-wigged partiers, races off into the rain. Halloween night in Nola is a big deal, so people all around the city are on the hunt for the best party.

But inside Jon Moody's shared shotgun-house-turned-studio space, the 23-year-old artist is at work. In the past few months, he's had "splash style" portraits commissioned by Future, Trey Songz, and Lil Wayne. Oh, and one of his prints was recently hung in the White House's east ballroom.

"Growing up in New Orleans encouraged me to be an artist," he says. "There wasn't a doubt in my mind that I could do this."

Although Moody now gets commissioned by famous rappers, he started his art life like a lot of kids: by drawing cartoons. He'd watch Mickey Mouse and draw the Disney character in crayon (which he says was "terrible"). In high school, Moody would get in trouble for drawing in class rather than paying attention -- he remembers getting called out for illustrating one of his teachers with gum falling out of his mouth.

During this time, he also played football and basketball. The word "artist" isn't often paired with "athlete," but Moody embodies both. He gets artistic inspiration from athletes and watches their training programs, motivational videos, and interviews with people such as boxer Floyd Mayweather.

"A lot of things go hand-in-hand in the two fields," he says. "Definitely discipline is the main thing. I looked at art as something very competitive."


In college, Moody ran track at Savannah College of Art and Design, where he received an undergrad degree in visual effects and a masters in painting. He returned to his home city and it wasn't long before the Likquid Art and Pepsi Creator team found him through his Instagram account and tapped him to create a painting in their Pepsi Art Dome at Voodoo Fest. The painting shows a young, black boy with blood trickling down his face. His background in visual effects made the Voodoo Fest animated installation especially appealing to him.

"For me, it was the future of how movies are going to be played," Moody says of the installation. "You're surrounded by the work, so it's more impactful on you -- it feels like you're moving."

Moody is interested in animation, but right now he's more drawn to creating murals and painting by hand. His paintings are often large-scale and focus on the human form. They combine vivid colors and raw emotion to tell a story.

"My work is not just about a pretty image," he says. "My personal work has to have some type of meaning. There has to be some purpose behind it."

Fox's Empire co-creator Lee Daniels noticed the impact of Moody's art. One of his paintings can be found hanging in middle son Jamal's bedroom on the second season of the hit show. Daniels liked the work so much, he sent Moody a video message, which the artist saved on his phone.

"I'm so in love with this artist," Daniels said in the video. "He's a fucking amazing artist."

All of Moody's success has come before his first actual show. He hopes to have his official debut in January at his shared studio space, 622 Elysian Fields. The space is called "draw and jrink," because in the front room people can pay to drink wine and paint (Moody's large paintings stay mostly in the back room). He wants his first show to be a nontraditional experience that will get people talking for the weeks that follow. Until then, he'll be busy working.

"There's like this 'starving artists' idea, or that it's not going to pay bills," he said. "But growing up in New Orleans, I never felt like I couldn't live off being an artist."