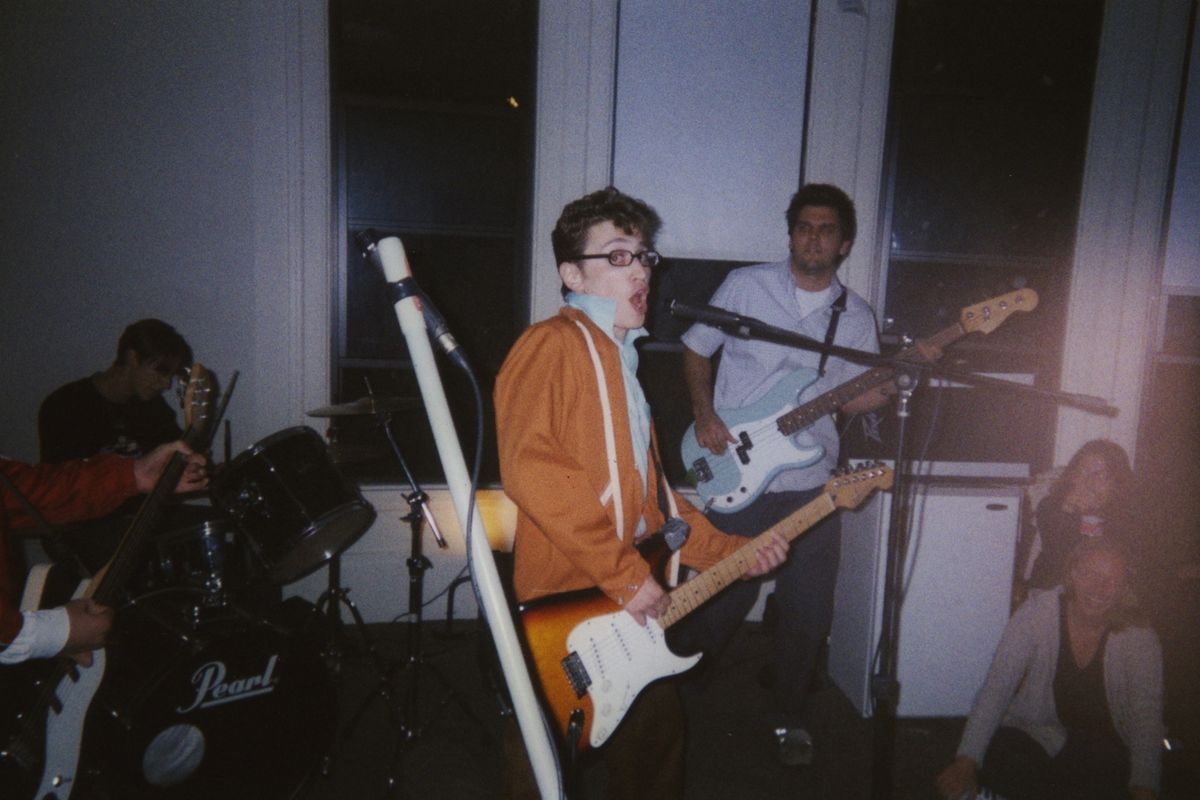 “Now I know this probably isn't how you want to be remembered…" says filmmaker Joshua Neuman as he begins the voiceover of his new documentary, Johnny Physical Lives, a love letter and memorial of sorts to his younger brother Jonathan who died of leukemia in 2002.

Yes, it's a story about cancer, but it isn't a cancer story. Instead of the teary-eyed farewells and saintly messages of love and life we're used to seeing in tearjerkers like The Fault in Our Stars, we see Jonathan, a young musician (and Buddy Holly doppelgänger), in oversized pajamas rocking out in front of an audience at a cancer treatment center. While he battles cancer, he maintains the spirit of a rock star, continuing to record music and play gigs at the hospital in between rounds of treatments. The doc itself intersperses film footage shot during Jonathan's treatment with animations depicting the musician as his onstage alter ego, the titular Johnny Physical, a raging rocker in the style of '70's-era Iggy Pop and, of course, Buddy Holly.

Joshua adds bittersweet levity with a voiceover that occasionally veers into snarky older brother territory; he says he wrote and rewrote his voiceover hundreds of times before the final edit. Those efforts pay off because it is Joshua's voiceover that you cling to as the film wavers from life to death and goes back and forth from found footage to He-Man style animation evocative of Jonathan's favorite childhood superheroes. The voiceover is also Joshua's way of continuing his creative collaboration with Jonathan (the film had actually started as a rock documentary planned by the two brothers when Jonathan was first diagnosed with cancer).

“The film is full of, like, inside jokes that I'm having with a dead guy," jokes Joshua. Throughout our conversation, he mentions that the doc wasn't just his project but Jonathan's as well. And, in making the film and remembering Jonathan through this creative process, Joshua says he didn't grieve for his brother in the traditional sense. It was only when the film production came to a close and he began the editing process did he fully feel the loss of his brother. "We were working on the rock documentary together, for a year and a half before he died, and after, I just continued working and editing the footage, and I just kept collaborating with him on that," the elder Neuman recalls. "It was very difficult to finish the film because I felt very close to Jonathan -- especially during the editing process. Partially because you're moving phrases around, cleaning up dialogue, juxtaposing it with different images and these new moments emerge. And it's sort of magical. You feel like something new is coming from this loved one's mouth that you've never heard -- even though they're long gone. I don't believe in the supernatural or life after death per se, but the impact of those new moments emerging is incredible. And addictive."

The film also features the late Albert Maysles. The legendary documentary filmmaker appears in scenes where he interviews Jonathan before the doc intercuts to animation showing Albert and his brother David, who passed away in 1987, interviewing Johnny Physical in the world of 1970s New York. Joshua says these moments are some of his favorites. He explains the scene as a depiction that the animated world is an extension of reality, where imaginations and dreams come true -- Jonathan is the rich successful rockstar Johnny Physical, and Albert Maysles has his brother back. "There is a sense that Jonathan dreams so hard that his dreams become real," Joshua says. "And part of the fun, I think, is watching he and I interact with this shared understanding of such. When Albert Maysles, the man who made perhaps the most iconic and important rock 'n' roll documentary of all time [1970 Rolling Stones doc Gimme Shelter], comes to shoot him at the hospital, Jonathan almost expects it: through his eyes we see Albert interviewing Johnny at his debauched suite at the Chelsea Hotel -- only one thing has changed. Instead of being accompanied by a younger cameraman, Albert is accompanied by his late brother and former collaborator David Maysles in the animated word. It is as Jonathan dreams so hard that other people's fantasies feel real. I can tell you that after Albert finished his shoot with Jonathan, we talked in the hallway of the hospital for a while about brothers and how much Albert missed his brother David. This scene in the film is about Jonathan, of course, but to a certain extent it's also about brothers and the crazy adventures brothers go on together."

Johnny Physical Lives will have its NYC premiere today at the NYC Documentary Festival in the IFC Center on November 14th -- get tickets HERE.