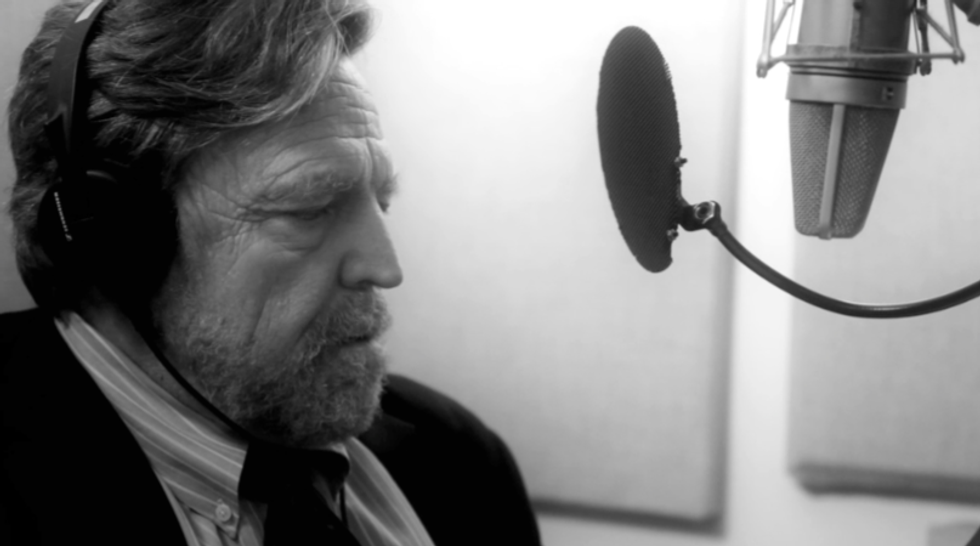 by David Hershkovits
PAPERMAG
Just who is this mythic figure known as John Perry Barlow? Wikipedia does a good job of setting the table: American poet and essayist, retired Wyoming cattle rancher, cyberlibertarian, aisle-straddling political activist. He is also a former lyricist for the Grateful Dead and a founding member of the Electronic Frontier Foundation and the Freedom of the Press Foundation; the latter counts Edward Snowden and Laura Poitras as members. Since May 1998, he has been a Fellow at Harvard University's Berkman Center for Internet & Society. He's a member of too many boards to mention, a Wired magazine contributor and an all-around American OG.

If you have the chance to encounter John Perry Barlow in any form, especially live, be prepared. I had the good fortune to dine with him at the invitation of Jacqueline Bosnjak, whose new agitprop record label, Department of Records, recently put out A Declaration of the Independence of Cyberspace -- a spoken-word version of Barlow's 1996 manifesto. Written primarily in response to the passing of the Telecommunications Act, which Barlow's Electronic Frontier Foundation saw as a threat to the independence of cyberspace, it's even more relevant today in the age of surveillance overreach than it was back then. But more on the Declaration later.

I digress to give you a better idea of what it's like to sit with this erudite everyman. Somewhere in the course of our three-hour dinner, I innocently ask him the reason for his visit to the city. Next thing I know, he's telling me about his great friendship with John F. Kennedy, Jr.

"I was probably John Kennedy, Jr's closest friend when he died," he begins. "I knew him extremely well from the time his mother sent him to work on my ranch until he died. I used to be a cattle rancher. And he had been out of Secret Service protection when he turned 16 and he had become a menace -- doing stuff like mixing up a large quantity of wallpaper paste and pouring it down the mail chute of 1040 Fifth Ave. You can imagine how that went down. Like a rambunctious puppy. A major teenager. Jackie sent him to the Youth Conservation Corps and the press was on him like stink on shit. She wanted to bring him in but not bring him in all the way.

"They're making a doc about him [Barlow was in town to be interviewed for it]. Not many people know what a remarkable human being he was. And how successful he was in what he was trying to do. He set out to be a 'good man.' That was his central goal. Called me one night when he was a junior in Brown. 'You know, this is going to sound incredibly arrogant to say that it would be a cakewalk for me to be a great man. I'm completely set up. Everyone expects me to be a great man. I even have a lot of the skill and tools. The thing is that I've been reading the biographies of great men and it seems like all of them, my father included, were shitheads when they got home. Even Gandhi beat his wife,' he said. 'And what I think would be a much more interesting and more challenging ambition for me would be to set out to become a good man -- define what that was, and become that. Not many people would know, but I would have the satisfaction of knowing.' I had this wonderful conversation with him about two weeks before he died. We talked about a lot of things. I taught him to fly. I said, 'You've got enough flight time so that you're dangerous as shit.'"

Barlow holds the floor on a wide range of subjects, casually dropping quotes from the likes of Emma Goldman (If I can't dance, I don't want your revolution!) as he discourses on Marx and the decline of the British Museum. Barlow doesn't speak in sound bites, though he's eminently quotable, his vocabulary a colorful mix of the erudite and the profane. Our conversation rambles from conspiracy theories to neuroscience, causality and, of course, drugs. He did travel with the Dead!

How does one graduate with a comparative religion major from Wesleyan and end up in this unchartered land of career plasticity?

"Alright, I took acid," he says. "And I immediately became very focused on physics. I'd been raised a good Mormon. And had a very literal relationship with the Almighty. At a certain point I just lost my ability to believe that the lost tribe of Israel crossed the ocean in a submarine. This is more or less corresponding with the time when I got a motorcycle and dropped acid. I wanted to figure out how to relate to it so I started studying physics and then frankly ran aground on arithmetic. It was so goddamn laborious, I gave up on that and began studying comparative religion."

Barlow's prescient Declaration of the Independence of Cyberspace was written at the World Economic Forum, where he had been invited to speak and was late on a deadline for the book 24 Hours in Cyberspace. "I was there to be a dancing bear because they had just discovered the Internet and they wanted to show how hip they were," he says. "We had passed the Communications Decency Act, which would have made it a felony and up to a $100,000 fine using such words that I had heard used many times in the Senate cafeteria. It was just the most ridiculous. I was simply stating that it was going to be very difficult for the physical world to impose sovereignty on cyberspace. Even though the relationship of cyberspace to the physical world is exactly that of mind and body, it is difficult for the body to locate the mind and impose anything on it."

He was at a party with a lot of hot women, he recalls, running back and forth from the dance floor as the words struck him. He never did make the deadline, but the Declaration was completed. "I sent it out to my friends, about 400 people, the Barlow spam list, people that didn't have anything in common except that I liked them and had their email address. First thing I've ever seen go viral. It was everywhere overnight.

"It was described as techno-utopian," he says. "There was a certain calculation to that. The best way to invent the future is to predict it. I felt that if I were persuasive enough in giving a vision of the future in which the Internet was inherently free and could not be controlled we had a better shot at it.
"I could also see there was never a better system that could inherently be extended for surveillance. Ever. I knew that. I wasn't stupid. I just wanted to pretend that was not the future."
You May Also Like
Internet Culture

Number One Popstar, Covered in Foam and Beans