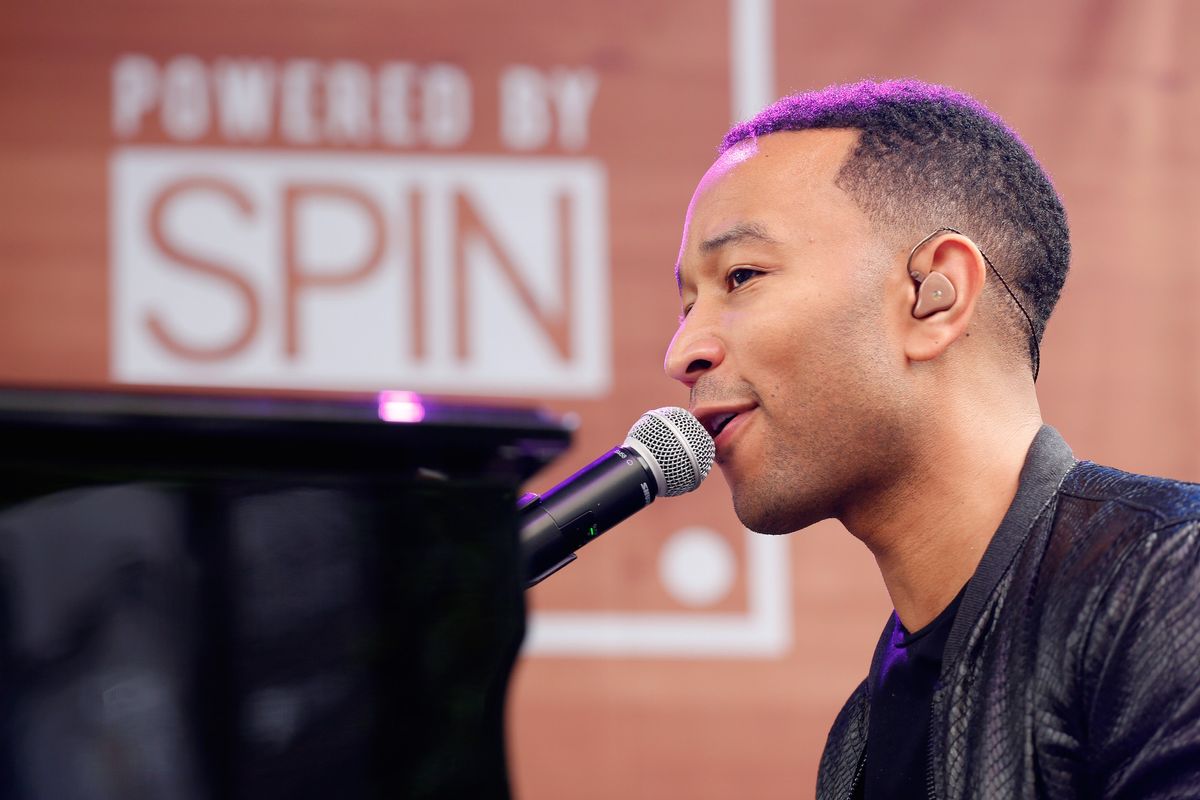 When we met John Legend at SXSW yesterday before he took the stage alongside five up-and-coming musicians in the AXE Collective, a new music and film development and mentorship program launched by AXE, the first thing we noticed was his easy confidence. It's no wonder he's so comfortable in his own skin -- he's built a sterling reputation in the entertainment industry, one bolstered by a powerful voice and dedicated work ethic that's secured him 10 Grammys, an Oscar win and, let's face it, the hearts of women everywhere, most notably our favorite Twitter icon Chrissy Teigen. In person, he comes across like a wise older brother figure that friends can trust to guide them on the right path. It's fitting then that he plays the role of curator and mentor for these five up-and-comers he hand-selected to make their live debut onstage at SXSW as part of the new initiative launched by AXE. We had a chance to speak to him before he and the AXE Collective artists took the stage.

When selecting AXE Collective artists, was there a specific quality that you looked out for?

When I listen to singers, I care a lot about their voice -- whether it's special, whether it's virtuosic -- but I'm also listening for songwriting ability, uniqueness, production choices and arrangement choices. Really, the basic question is: "Would I want to listen to an album from an artist like this?" I tried to pick the artists that best met that definition.

How do you see yourself helping these artists as a mentor?

I gave songwriting advice to one of them, because I thought they had a good voice but the songs could be better. I gave another business advice, telling them what to do to take advantage of this situation and how to maximize their talent in the best way.

How do you see your role in impacting national conversations? Your Twitter activity gets a lot of media attention.

My role is only contingent on people caring about what I have to say. I've been interested in politics for a long time, speaking out over the years for particular candidates or causes. Back in 2002 or 2003, I was protesting the Iraq war. And I'm still that same guy: someone who cares about the world and isn't afraid to speak out on what I think is the right thing. When it comes to the upcoming election, we shouldn't encourage people who are spreading hate and division, or singling out people because of their religion or their race. We should be electing someone to lead the country who is leading with love, optimism and openness.

And I think there were a lot of people who were happy to hear you express that.

I feel like people have been dancing around what [Trump]'s actually doing. It's pretty nasty.

You've had recent success with TV and film ventures like Selma and Underground -- do you see yourself making a foray into acting or continuing to create music for film and TV?

We have a production company called Get Lifted Film Company, where we produced Underground and I did a song for Selma. We are co-executive producing a new film called La La Land, which is kind of a classic Hollywood musical directed by Damien Chazelle and starring Ryan Gosling and Emma Stone. I'm acting in that as well as being a musician in the movie.

Are they singing, too?

They're singing and dancing. It's beautiful. I just saw a rough cut of it last week. To me, [film, TV] is just an extension of what I already do. I'm an artist, a creative person, and a storyteller. I have a point of view that we are trying to disseminate in different ways. Obviously, I'm going to do that as a musician as well...I've got a new album coming out this fall and a new tour.

Is La La Land coming out this year?

Yes, it's comes out in the fall. They just pushed it back so it'd be around awards season actually. We also co-executive produced Southside With You, the new film about the Obamas' courtship that sold after Sundance. I wrote a song for that as well, so that'll be cool.

It's exciting to see those worlds collide with politicians you admire, the artists you admire and having those stories come to the forefront.

Yeah! I think it's cool we're able to tell these stories. That's really the power of film and TV -- they're a format to tell interesting stories, humanize people, talk about complex issues, and put a face to them. We're excited to be able to give young filmmakers that opportunity with the AXE Collective. That's the other half of this mentorship program. June is the deadline for filmmakers and they'll get a chance to be seen at the Toronto Film Festival in September.