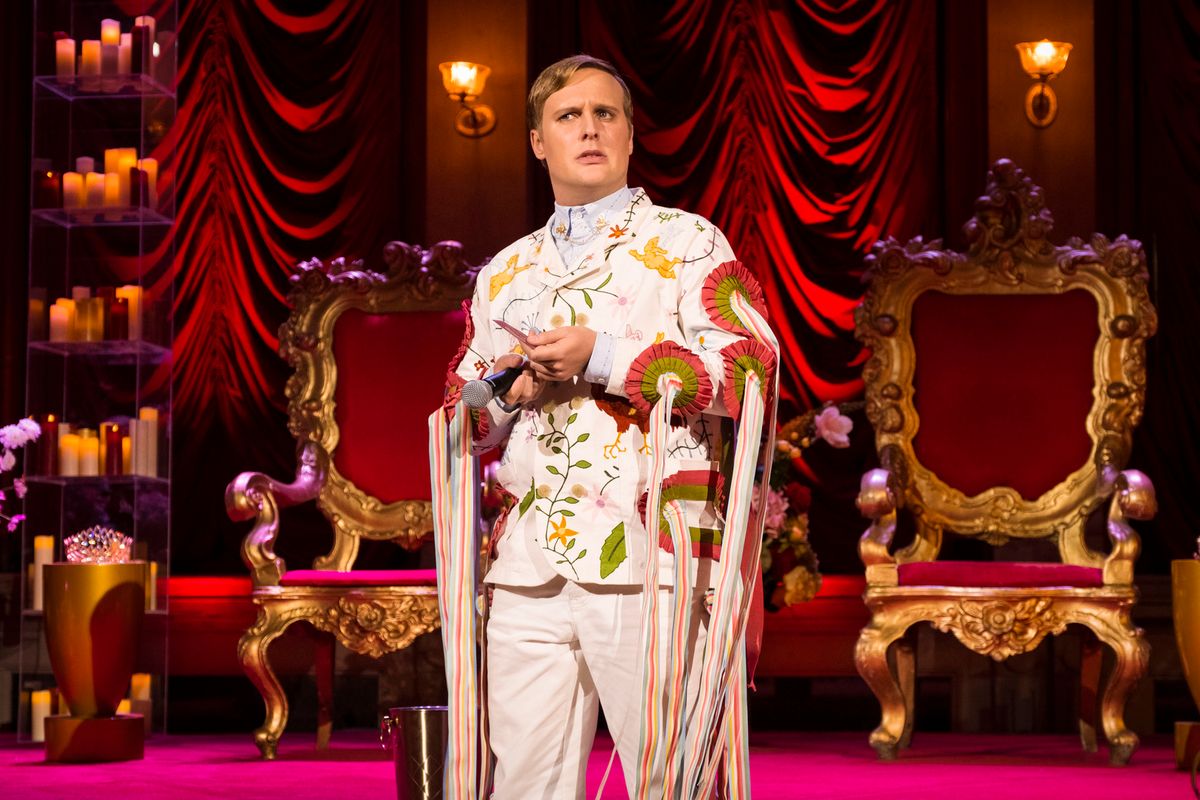 John Early Is the Best at Being the Worst

When it debuted in 2016 to critical acclaim, Search Party was perceived to satirize not just Brooklyn twenty-somethings, but the wider pop culture obsession with Brooklyn twenty-somethings that was inescapable at the time. Season three, now finally streaming on HBO Max in a very post-Girls world, cleverly expands upon those original intentions. The writing has caught up with our current excruciating discourse around privileged young white people, and taking full advantage of the tightly scripted farce is comedian John Early.

As Elliot on the show, Early plays one of the most diabolically deluded characters to ever skewer millennial culture. Which is actually saying a lot. As the rich college friend of Alia Shawkat's Dory Sief, he hilariously portrays how an eccentric young gay NYU alum might act upon accidentally helping commit a felony: breaking out in full-body hives, impulsively getting engaged, running away to the Hamptons to live in the mansion of a recently deceased sugar daddy.

Related | Kate Berlant Has a Therapy Breakthrough With Waxahatchee

This season sees Elliot go viral after being identified as Dory's accomplice following her arrest over the suspicious death of private investigator Keith Powell, allowing him to live out the very 2020 dream of becoming an LGBTQ celebrity sellout. There's a million-dollar sponcon wedding ceremony that's a little Queer Eye, and a series of right-wing talkshow appearances (opposite SNL's Chloe Fineman as a bleach blonde firebrand in one of many great insider cameos) that are a lot Milo Yiannopoulos. It's delicious to watch, and Elliot remains ridiculously likable the entire time. Early's adept physical comedy allows him to kind of literally get away with murder, especially when he's paired with Chelsea Peretti in a memorable police interrogation scene.

In real life, Early embodies the better traits of our generation: socially aware, self-deprecating, funny on Twitter. Outside of the show he's known for his pop music-forward stand-up shows and video short collaborations with Kate Berlant.

PAPER caught up with him over the phone, right as the revolution hit, to talk about Elliot's many humiliations and a little bit of politics.

I'm so, so happy that Search Party season three is finally out.

I know, I can't even comprehend how long it's been since A) the second season was even on air, and B) since we shot the third season. It's insane. I think it was 2018 when we shot this. Fall? Yeah.

What happened that year? I couldn't tell you.

I couldn't either, something new happens every day.

Well, how does it feel now to be on the precipice of releasing literally an HBO show, it turns out?

It's been quite a journey. I mean, it feels a little futile at the moment. But certainly, I love the show deeply and I'm very proud of it and I think it'll be a good way to be entertained when you're taking a break from the struggle for Black liberation. And also might be cathartic for people to watch white people suffer.

There are a lot of white people who may unfortunately see themselves in this.

Co-creators Sarah Violet-Bliss and Charles Rogers wrote the part of Elliott specifically for you when the show was first being conceptualized. I would have been quite insulted if that happened to me.

[Laughs] Well, I wasn't. I know what you mean, obviously, that's very funny. And trust me, there are moments where I'm like, "Oh, God, am I this person?" But no, I think they knew I had already put some stuff out in the world and expressed a kind of desire to... I don't know. I like playing characters that are narcissistic and that are caught between being extremely false and artificial, and then in the next moment really clownishly vulnerable and raw, you know? I was so flattered that they were very much writing to my strengths. It's very cool and they've only just gotten it more and more. They are now kind of showing me what I love. As time went on, it was like, "Oh, you are somehow intuiting everything that I like and want to do on the screen." Shitting in my pants, having a rash, having my hair fall out, be screaming in my underwear on the street. It's really quite sophisticated, the way they're able to figure that out.

Elliott has many humiliations, but the way that he carries himself through everything — it's so much fun to watch.

Totally. It's the only thing to admire about Elliott, that no level of humiliation can stop him. And he's basically been canceled every season. I don't even think we had the language of cancellation in season one, and he does not have the kind of cultural awareness to know to step back post-cancellation. He doesn't know that it's the sensitive thing to do, to go into hiding. He just keeps forcing himself into the culture, every time. So funny.

Related | Less Than a Minute on Zoom: Jordan Firstman and Lauren Servideo

My favorite moment in the whole season was when you and Chelsea Peretti were getting interrogated by a police officer, played by Nina Hellman. How did a Peretti-Early collab come together?

Well, Chelsea is a true idol of mine. When I first moved to New York in 2006, I was obsessed with Variety Shac, her comedy group. I used to go to their live shows and I really, really worshipped them and their shorts and stuff. And so it has been surreal for her to know who I am in any way, and to get to know her over the years through comedy, but she's friends with Charles [Rogers] and SB [Sarah Violet-Bliss]. And she knew them and she's apparently a big fan of the show, so I think they just had this small part and asked her if she wanted to do it. And she was so down to just fly to New York for basically one day. But it was so cool, I think she's really one of the most effortlessly funny people in the world, and I think her persona and her comedic rhythm work really well next to Elliott. It kind of makes sense.

Also memorable is the Chloe Fineman storyline, where Elliot flirts with the right wing, which plays with this new kind of queer fame that we're really just starting to reckon with.

Exactly. Yeah. Obviously, Milo Yiannopoulos is the big one, but there are a lot of people in media who are these like, gay contrarian, self-loving journalists. It's so bizarre. It's so, so bizarre. I think they are totally spot on that a character like Elliott is someone who in this moment would capitalize on internet radicalization and political bipolarization. Or political polarization — but I like bipolarization, can I coin that?

I think you can.

That's huge. I think some people feel excluded from the leftist veil of academia. Like academic language around social justice, they feel resistant to it or maybe excluded or resentful of it. And they don't take that second breath that a lot of us take and go, "You know what though, this is for the greater good, and maybe I'm feeling defensive and resistant because I don't want to face my own complicity in the matter."

They don't have that moment of reflection, and they just go running straight to the right. It's been so weird to watch it all evolve. I mean I remember like 2015, 2014 as I started to learn about the Milos of the world, and the alt-right in general — I just remember being like, "Well, this is a blip. This will just be a little teeny moment that my kind of niche, rarefied gay Twitter will talk about and cannibalize in a matter of two months and I'll look from the sidelines and learn about it, sort of." And then it's become an entire half of the country.

It's a little worrying.

And there's so many different confusing axes. It's obviously not as simple as just half the country, or Republicans versus Democrats. It's really nice that there is maybe some more nuance now. I think people are starting to realize that some Democrats are evil. And I think that's ultimately good for the country. It's just all very paralyzing. You can't pull any of this! None of this. I'm talking out of my ass completely!

Related | Megan Stalter: Faking It 'Til She Makes It

Well, I certainly have feelings. I certainly have very strong political feelings, but they are really just feelings. They're not rooted in any actual study or theory. Most people's politics in this moment, when tested, kind of immediately fall apart. And it's not that they're not full of conviction or emotion. It's just like, we've all learned how to be political through two tweets. And I do think that's ultimately good. But I'm asked to talk extemporaneously about it, you just immediately like, "Oh, cool, there's like, there's nothing there? Got it."

I think at the beginning, this show was simply satirizing white millennial TV tropes. And now that has taken on, as you were saying, a different and maybe more sinister meaning.

I completely agree. They weren't just satirizing millennials or millennial culture, they were also satirizing the way millennials are portrayed and the way they are perceived by people of other generations or the way even millennials represent themselves in art and advertising. As the world changes... I guess what I was trying to say earlier is there was something bubbling up, there was this kind of disgust and self-hatred.

To myself, being a privileged white person, there was something bubbling up under the surface before Trump. And you can feel that in season one, which we shot before Trump happened. And I think when Trump happened, it kind of exploded the conversation and exposed some flaws in the system. Now I think we all are actually able to articulate our own self-hatred, or our own complicity, in this disgusting system. So I think maybe people can watch it with more directness — a sharper, more satirical lens this time around.