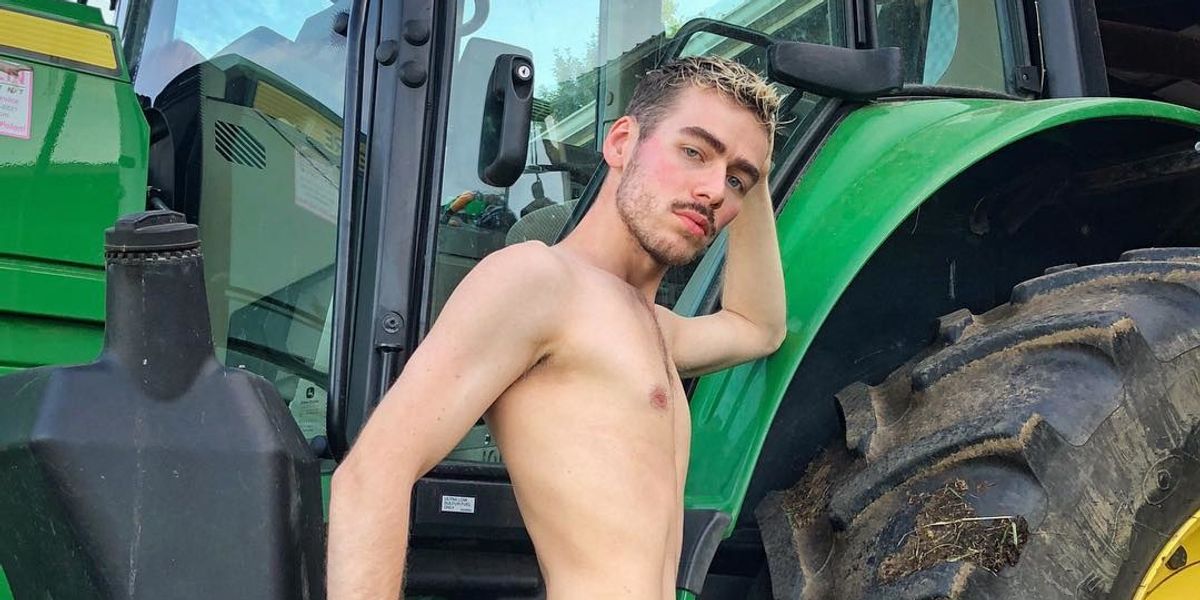 "call me an artist because i draw attention," invites John Deeriere's Instagram bio. And draw attention he does, with dramatically staged NSFW photos in pastoral scenes and quippy one-liners. There is the photo of him posed nude on a tractor: "John Deeriere imagines the rural landscape as a queer utopia in which Tractor Supply stores are s*x shops and tractor pulling refers to glute workouts." Or the series of him slowly pulling off his (John Deeriere-designed ) Harley Davidson x Homosexuality muscle tee: "coming out as an artist to your working class family is like coming out as gay to your conservative religious family, in my experience." Or maybe just a simple picture of Deeriere lounging in an office, dressed in Calvin Klein boxer briefs: "it comes as no surprise that the city gays who co-opted rural aesthetics are now practicing self-isolation and a return to nature."

The ass pics posed on a tractor are a surprise at first, but the shock value is by design — and even the quippy pun alludes to what comprises a much larger artistic practice, designed to stimulate the viewer's body and mind. Any one of Deeriere's truly thrilling semi-nudes is aesthetically decadent and delightfully suggestive, but is hardly complete without reading his accompanying captions, which are universally clever, political and compelling.

The artist behind the pseudonym, Blake Jacobsen, tells PAPER that he's trying to shape "a positive representation" of queer people in rural areas, in addition to drawing attention to their daily experience and real-life challenges. John Deeriere, the digital character, is just one facet of Jacobsen's prolific artistic practice. Beyond the John Deeriere Instagram page (and the calendar, and the merch) Jacobsen creates work using both digital and analog format photography and is an MFA student at UCLA. His work largely centers around rural queer identity, class, religion and community.

Creating work under the pseudonym John Deeriere "complicates the closet binary and holds space for the spectrum of 'outness' that many rural queer people experience." He says John Deeriere "began as an Instagram handle, which then became a character and brand, and ultimately fulfilled a need for duality." Having grown up between Ohio, Florida, Kentucky, and Georgia, creating an aspirational character was a way to feel queer when he "understood queer culture exclusively through a virtual lens and didn't have representations for how to exist simultaneously within my rural and queer identities." Using portraiture as a fundamental form of self-expression allowed him to reimagine himself, while drawing from a long history of queer portrait photographers like Bob Mizer, Robert Mapplethorpe and F. Holland Day.

While Jacobsen's self-portraiture centers around his own body, the other central subject in his work is the rural landscape where he lives and works. His images show a visibly queer person in a rural area, and challenge "the dominant narrative that queer people have to live in a city, that cities are the only site of acceptance." While acknowledging the difficulty of being queer in "a historically unwelcoming environment like rural America," he's equally critical of the dominance of the queer migration narrative. "There is still a huge imposition that you need to move to a city [to be queer]," he says in a charming country twang, citing the need for an ongoing conversation around "geographic identity" similar to those that the queer community has begun to have around racial and gender diversity. "There's such an erasure of queer people in non-metropolitan places."

Without role models or community directly around him, the internet became an essential part of Jacobsen's imagination and self-actualization as a teen. Now, he's trying to bring that representation home, "I think being queer and remaining where I'm less welcome is a political act, a radical gesture. Just by existing you're bringing visibility to other queer people in that region." On the internet, he's pursued a similar project to "reveal that there are queer people and queer communities everywhere." In imagining what rural, queer life can look like, he suggests that there can be "a DIY sense of collectivity, a sincere sense of community, and more mutual aid, which is vital for rural queer people who have less access to nonprofit and government resources." The future of the subculture is still being written, and the internet is uniquely suited to be a part of it. As the world has been put on pause — anchored at home under coronavirus quarantine, social distancing and lockdown — Deeriere affirms that the internet can bring us together, "the coronavirus is causing many people to confront isolation for the first time, but this is something that queer people in rural areas have always had to deal with… [many people] are looking to the internet as a place for community and connection."

John Deeriere exists at the intersections of sex work, the internet, and the art world. Reflecting on what he calls "the most complicated dimension" of his practice, he acknowledges that establishing an OnlyFans page was a natural transition from his Instagram where he was effectively doing the same work for free. The need to incorporate sex work was grounded in practical economic concerns, "when you don't have a lot of money or resources, one of the things you do have is your image and your body." Sex work can be tricky territory to navigate because of the stigma attached, especially while working as a professional artist and MFA student who is blurring the lines between photography, self-portraiture, and explicit commentary on the queer body. "I'm always trying to figure out if all of the things I do comprise a larger art practice, or if there's space for things to exist separately, without the need to coalesce them."

But it's this combination of diverse identities that makes his work so unique and genre-defying. What defines the John Deeriere project, and Jacobsen's vision for it, is his persistent desire to disrupt binaries by embodying them. Queer people shouldn't have to choose between the rural homes that they come from, and living in the queer community they choose. He affirms that we can all embrace sexual positivity while also complicating it. Perhaps, above all, his work shows us that the dichotomy between the internet and physical community is not as restrictive as we think. Jacobsen's John Deeriere might be "sugary," but his ideas are substantial, nuanced and thought-provoking. They promise a revolution.