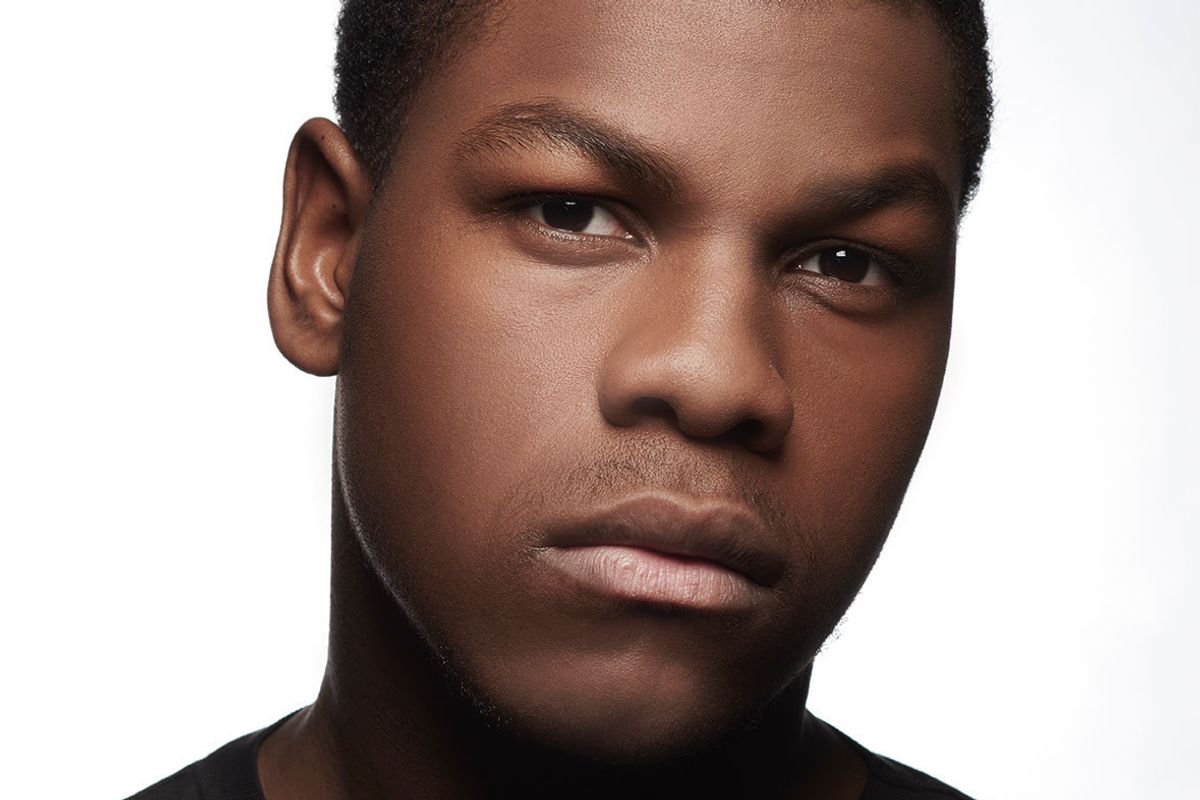 The Force Is Strong With John Boyega

Playing a lead role in a new Star Wars film is no guarantee of success (Hayden who?), but if any of the new faces in The Force Awakens has the charisma to stick around, it's John Boyega. A Londoner born to Nigerian parents, Boyega knew he wanted to be an actor when he realized he was no good at soccer — a good thing for us as well as himself. His debut film was Joe Cornish's 2011 genre mash-up Attack the Block. As villain-turned-hero Moses, Boyega thrilled us and made us laugh, proving that he could kick ass even while surrounded by aliens on the offensive. But his role as AWOL First Order stormtrooper Finn is set to catapult the 23-year-old into the stratosphere. Harrison Ford himself told the young actor that his life would never be the same — but to hear Boyega tell it, he's taking it all in stride. "I like the camera," he says. "I mean, I'm a '90s baby, so I literally grew up with the camera in my face."

He spoke to PAPER in Los Angeles about the role and the oncoming media onslaught, but he wouldn't say what his next project is (a hint in itself?).

Are you thinking about the darker side of fame now that you're on the cusp of it?

Oh, the darker side I'm thinking about is Adam Driver in that suit.

I'm about the movie, I'm about the process, I'm about the people, and I didn't come into this by myself. I came into this with a fantastic team, with family, with friends, with obviously everybody at Disney. Kathy [aka LucasFilm presidnent Kathleen Kennedy], she's amazing. So I feel very supported coming into this. I'm just taking each day as it comes, and December 18 we'll see exactly how this movie goes.

Any advice from the older cast members on dealing with this kind of celebrity?

I remember Harrison told me that "it's just going to change your life." I think that him not going beyond that just means that it's an experience — it's each to their own. So we will see what I learn and how I grow within the Star Wars universe. But so far, I have to say the fans have been amazing. We were in Anaheim earlier this year at San Diego Comic-Con and it's just been brilliant to actually meet them and see how excited they are.

Are you being recognized in the street a lot yet?

Looking forward to that or dreading it?

It's part of what it is, isn't it? I mean, if I saw Johnny Depp walking around... actually I did see him today. So, you know, it happens. But no, I've been walking around L.A. and nobody recognizes me at all. Back home I'm walking around like usual, and I know that's going to change with the release of the movie. I'll just do the human thing and adapt.

We all loved your reaction to the race comments on Instagram. Has that ever been an issue in your career?

It's never been an issue, no. But this is the thing about Star Wars. It reaches out to many people, with both positive responses and negative responses. What I am fixated on is that we've come to a point where everybody is absolutely excited about the movie. Most of the fans are positive and are expecting the movie to be good and they're in full support, so that's what I'm most excited about.

Especially when you see 8,000 people just absolutely screaming [at D23 Expo 2015]. Negative is nonexistent. This is Star Wars; this is a positive thing.

Do you have any hobbies outside the craziness to keep you sane?

This is not craziness. This is me doing my art. I'm not a rock star or anything; I'm acting. I'm going to places where I get to meet genuine fans of these franchises. I still do the normal stuff that every guy does; you just end up going to a panel and obviously there are a lot of fans — and watching a movie where you just happen to be the lead. So it doesn't feel crazy to me.

You don't get in a point where you've just got to get out of the whole acting and Star Wars headspace for a minute?

They don't collide with each other. There's a perfect balance to the force.

Any talk about whether Finn's going to appear in the next episodes?

Kathy said at the Anaheim convention that the Star Wars universe is always expanding. So let's get through 7, let's see what happens and then we'll continue from there. In between, we've got [peripheral Star Wars prequel] Rogue One for you guys. We've got the other spinoff movies, the Han Solo origin story, then we'll see what happens with the main franchise.

Would you do other Star Wars films if they approached you?

Of course I would. Why not, why not?

What have you got coming up next after Star Wars?

[ to the publicist hovering nearby] Am I allowed to mention my next projects? No.