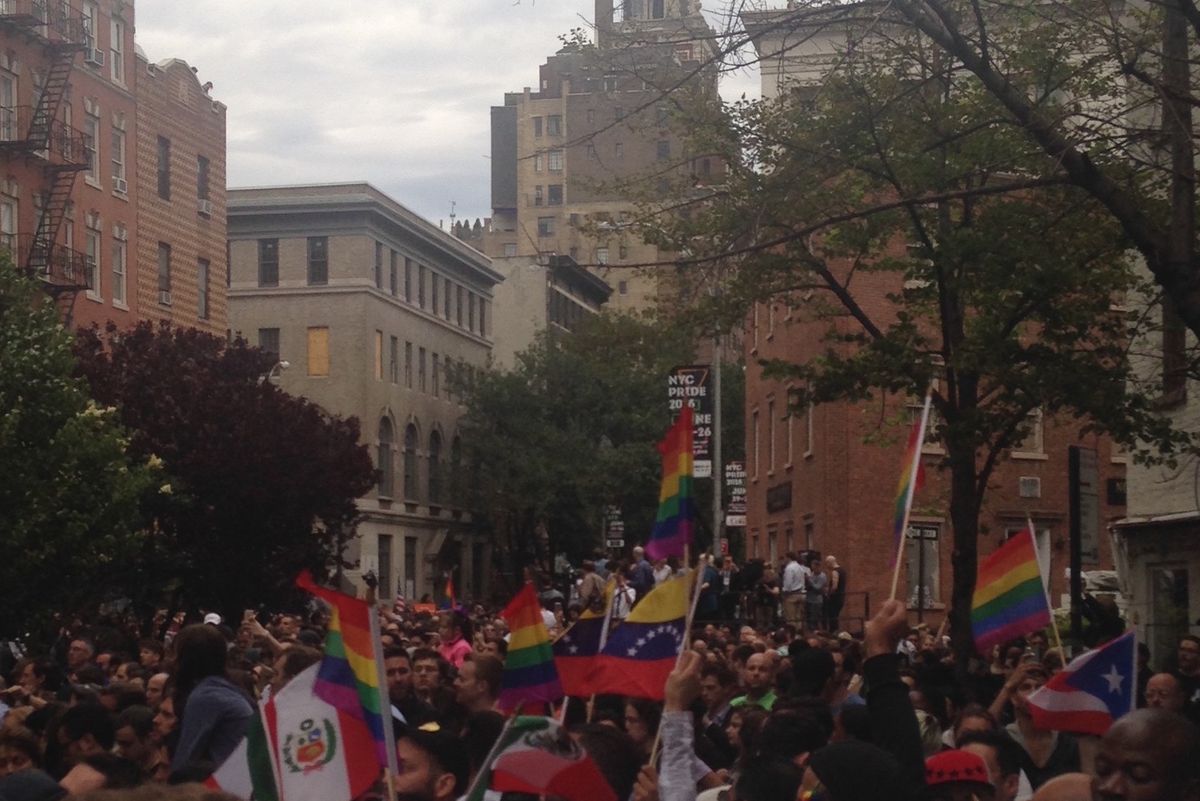 "We've Learned To Call This Normal": Joey De Jesus On QTPOC Erasure In The Wake Of Orlando

The world is still reeling from last week's horrific shooting at Orlando's Pulse nightclub, where 49 people -- almost entirely QTPOC -- were murdered in cold blood. The massacre served to further highlight how important nightlife and safe spaces are in supporting gay culture. Ahead of NYC's Pride celebrations this weekend, we are celebrating the people, parties, and places that make up the LGBTQ community, and make existence a little bit easier in an often-scary, narrow-minded world.

Joey De Jesus is a New York City-based QPOC poet and writer who attended the Stonewall Vigil for the victims of Orlando's Pulse shooting. In the days following that gathering, we asked him to articulate his thoughts in an op-ed in the wake of everything that's happened.

Following the Pulse nightclub massacre in Orlando, echoes of past abuses I long thought buried in the deep trench of my subconscious resurfaced—razor-mawed eels in the dark. I am not alone. In each of us, these echoes resonate at different frequencies—images carved into our senses by repeat traumas, the brutality with which we galvanize ourselves. The sandy texture of tile grout against an upper lip, cold gunmetal in my mouth, whispered sounds, snot; we all carry our own stories of violence.

We've learned to call this normal.

I've been thinking about the fears of cis men, of "straight" men, of white men, of men who are all these things, and that they are different from my fears, although I don't know how.

This massacre reminds me that it is exhausting to avoid the triggers of hypervigilance and collapse. It is exhausting to know that our society relegates us to carrying these traumas until our bodies dissolve into dirt and ash. I'm angry. As politicians within our malformed nation make quick work of further normalizing violence against our communities, the perception spreads that we are pitiable, the misery of the whole world inflicted upon us. And yet, despite all of this, the love that we QTPOC hold for each other within our communities builds the closest thing in this world to utopia. It's no secret that our cultural production, our intellectual labor and, even our grief gets mined, appropriated, perverted, and claimed by those with clout and dark agendas.

Politicians champion us only in death, and the subsequent whitewashing of our tragedies is always swift and complete. Our deaths become yet another device with which the political elite polarize the American public. On one hand, right-wing media regurgitates Islamophobic rhetoric in defense of the Second Amendment. On the other, leftist media leverages our deaths against the NRA. Both distract from the fact that, while our community is distraught by the 49 lives we've lost, we are dying and have been dying a long time now. Queer and trans people of color have been erased at the hands of the state, whether due to inaccessible housing, insufficient health care, economic disenfranchisement, mass incarceration, or hard metals in the water.

Tragically, it came as no surprise that upon arriving at the Stonewall Inn for the vigil on June 13, I'd witness what amounted to an elaborate exercise in white catharsis, erasure and grandstanding occurring on a stage leavened with our blood.

"As soon as this pity party is over…," we heard from a cop walking against foot traffic as we crossed Seventh Avenue.

Nearly half of the victims in Pulse were Boricua. I've been speaking with the Boricuas within my chosen family, talking about how America doesn't care about us. The same politicians mimicking grief over queer Latinx death are also complicit in installing an unelected board of financiers as the overseers of the entire Puerto Rican economy. Hospitals, schools and clinics are closing. Policies are yet another manifestation of erasure. And it is the forces of erasure against which we clash.

As we waited for the speakers, we stood beneath snipers on the roofs carrying the same kind of killing power that killed us in Orlando. We shuffled through an area riot-proofed with metal barricades that made mobility almost impossible, and seemed to be meant to protect the media in attendance, not us. And then, those speakers, among them: New York Police Commissioner Bill Bratton, New York Governor Andrew Cuomo and Nick Jonas. Please, white men, teach me to exceed what I thought was my capacity for resilience.

Why would anyone think it appropriate for Nick Jonas to take up space at a vigil commemorating dead Latinx people? Nick Jonas, who gets his coin from flirting with an affable white gay audience. His presence at that vigil felt manufactured and dissonant. I was beside myself with rage as I suffered through the transparency of his careerism and white mediocrity. The queer Latinx community doesn't give two shits about Nick Jonas, and he certainly does not speak on our behalf. Neither do Cuomo, or police commissioner Bratton, who has our blood on his hands. Their presence prodded at a fresh wound, their words droned hollow, but I trust they will live up to the promise made of further "protecting" our communities, That they would use POC deaths to advocate for the increased policing of POC communities is disrespectful to the dead. And even more so to the living.

As the vigil wound down, they read the names of the newly dead--and failed at the pronunciation. They couldn't even say our names — a slow erosion as their botched sounds grated against my inner ear. Then, they played some Coldplay.