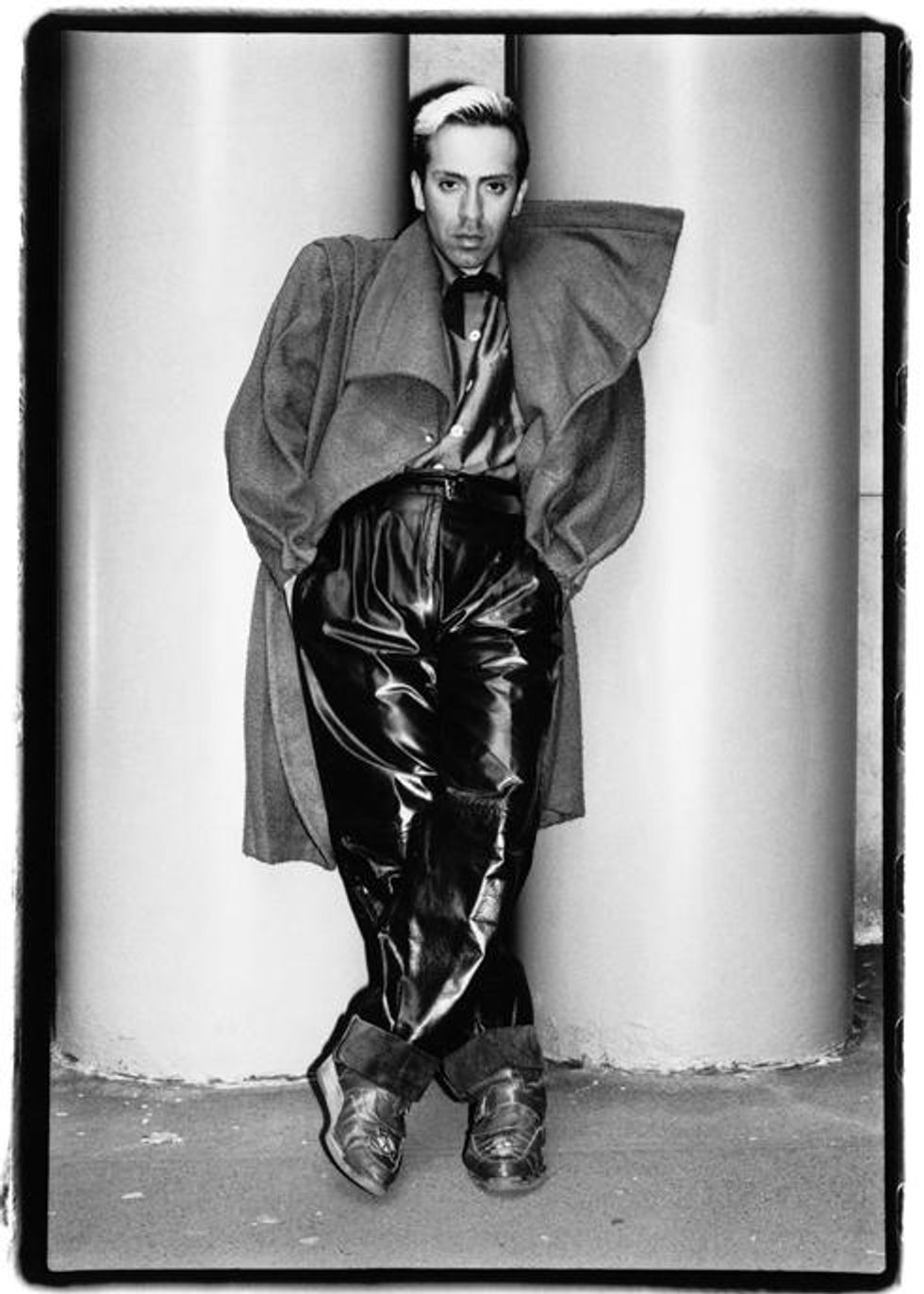 Joey Arias' Eight Most Insane Moments From Working at Fiorucci

by Kim Hastreiter
PAPERMAG
Joey Arias during his Fiorucci days in 1982, photographed by Amy Arbus.

As many of you might have heard Elio Fiorucci passed away yesterday. Fiorucci's 59th Street emporium (simply called Fiorucci) skyrocketed to fame in the late '70s and defined the decadent disco-liberated seventies. It was one of the most extraordinary stores that has ever existed in New York City, because it was a living breathing crazy cultural moment. Sure, there were the clothes which changed every month from Day-Glo to leopard, but that was only the tip of the iceberg. There were the live window displays and the insanely loud disco music.  There were the wild parties that took place after hours, there were the throngs of customers  ranging from midtown secretaries to Greta Garbo to Andy Warhol to Yves Saint Laurent. And  then there was Fiorucci employee Joey Arias, the store's star and most famous sales associate. Before he could become a cabaret legend, Arias developed a huge following of customers that would come in to be entertained and cajoled by his hilarious energy and insane antics. In many ways Joey Arias was Fiorucci -- and that's why Elio loved him so much. People from all over the world would come to Fiorucci to see Joey as much as they'd come to buy the clothes. With Elio's passing yesterday I thought it would be fun to hear more from Joey about some of the most outrageous things he ever saw when he worked at Fiorucci. Here's what he said.

1. I was introduced to Lauren Bacall to help her through the store. She was a very intense lady. I actually thought she had a pole up her ass the way she walked around with so much attitude. She finally picked some clothes that she liked and I brought her to one of the dressing rooms, where she proceeded to light up a cigarette and just stare at herself smoking. Then she lifted the cigarette, with ashes and dumped them on my hand! I was shocked that she used my hand as an ashtray, eventually putting the cigarette out on my palm. I wanted to punch her, but she did purchase lots and tipped me. Showing her my blackened palm, I told her to please come back and smoke anytime.

2. A supermodel who will go unnamed would always pop in to pick up the latest item. One day as she was changing in the dressing room and I could hear snorting and coughing. I asked her if she was O.K., and, peering over the dressing room, I saw her with a huge bag of coke. She was going wild and dropped the bag. Coke spilled throughout the dressing area. She was flying and so were we!

3. A very strange lady used to come by every day -- she was very eccentric and surreal. She had her head tied in a flowing scarf and had a Halston shawl draped over her right shoulder and was always holding a Sherman cigarette between her long fingers and very long nails. She would walk like a Bob Fosse dancer. I was fascinated and wanted to know who she was. I asked her and she said "Kay," then did a twirl for me and sang a bit of a song from Funny Face called "Think Pink." At that time, I had Day-Glo bright pink hair and she told me, " the only reason I come here is to look at your hair." She dropped her cigarette on the wooden floor and stomped it out and I never saw her again after that.


Joey Arias and Klaus Nomi dance in the windows of Fiorucci for the '80s news show Real People.

4. The king and queen of Spain came to Fiorucci and Elio was there to greet them. The secret service scanned the store and closed the doors for half an hour so they could shop. Elio introduced me and I bowed to them as they gazed at me. I proceeded to show them everything.  They were pleasant and could barely speak English. In my broken Spanish, I  asked them if they wanted some enchiladas. They looked at me as if I was crazy and said they'd never had one. After all their looking around I thought I was going to make a great commission, but in the end all they purchased was a key chain with an angel attached!  What a drag that was.

5. Andy Warhol popped in quite frequently and loved having a quick coffee while he checked out the new items. The one thing that he really liked was the makeup bar. The makeup department had just purchased makeup for putting on dead people. He was so fascinated by this and wanted to try it, so the makeup artist proceeded to make him over. When she was done he looked a wax dummy of himself! It was a bit of a shock. He loved it and purchased every bit of that makeup.

6. A couple came in to buy jeans. I could tell they'd had a few martinis and they laughed and kissed the whole time. When I took them to their dressing room, they said they'd share since the store was packed with customers.  I heard some moaning and peeked into the dressing room and they were having full on sex. He was fucking her in the ass and she was making the crassest sounds. I told them to stop and they ignored me. We had to get security to stop them. They were asked to leave, although in the end they did purchase the jeans they were having sex in.

7. I was standing at the back of the store when I saw this woman walking around in a light coat and dark round glasses. She had a bag and was creeping around the store, slowly looking over her shoulders. I thought she might be a thief, so I kept my eye on her. She would gaze at me and continue looking at clothes. I thought she was going to lift something, so I went right behind her and whispered in her ear if she needed help. She turned quickly at me and said "no, I'm just looking". Something was different with her, but  I couldn't put my finger on it. But when I saw her profile, I finally realized that it was Greta Garbo. She knew that I knew, so when I went to grab the manager to see her she flew out of that store like a tornado.

8. Divine used to pop in the store and loved the music and clothes. He wished he could fit in the clothes and tried to put some on but ended up ripping them to shreds. It was like a John Waters film in the store. He was animated. He loved to open ladies purses and see what was inside and they would all be gagging over Divine doing that. It was a different time. People had a different attitude. At the end of the day..it was all fun and harmless. I'll never forget.

You can catch Joey Arias starring in the Joey Arias *Experiments* at Pangea, now through August 3rd. Tickets are available here.