J.Lo and Balmain's Olivier Rousteing On Luxury, Race and Feminism 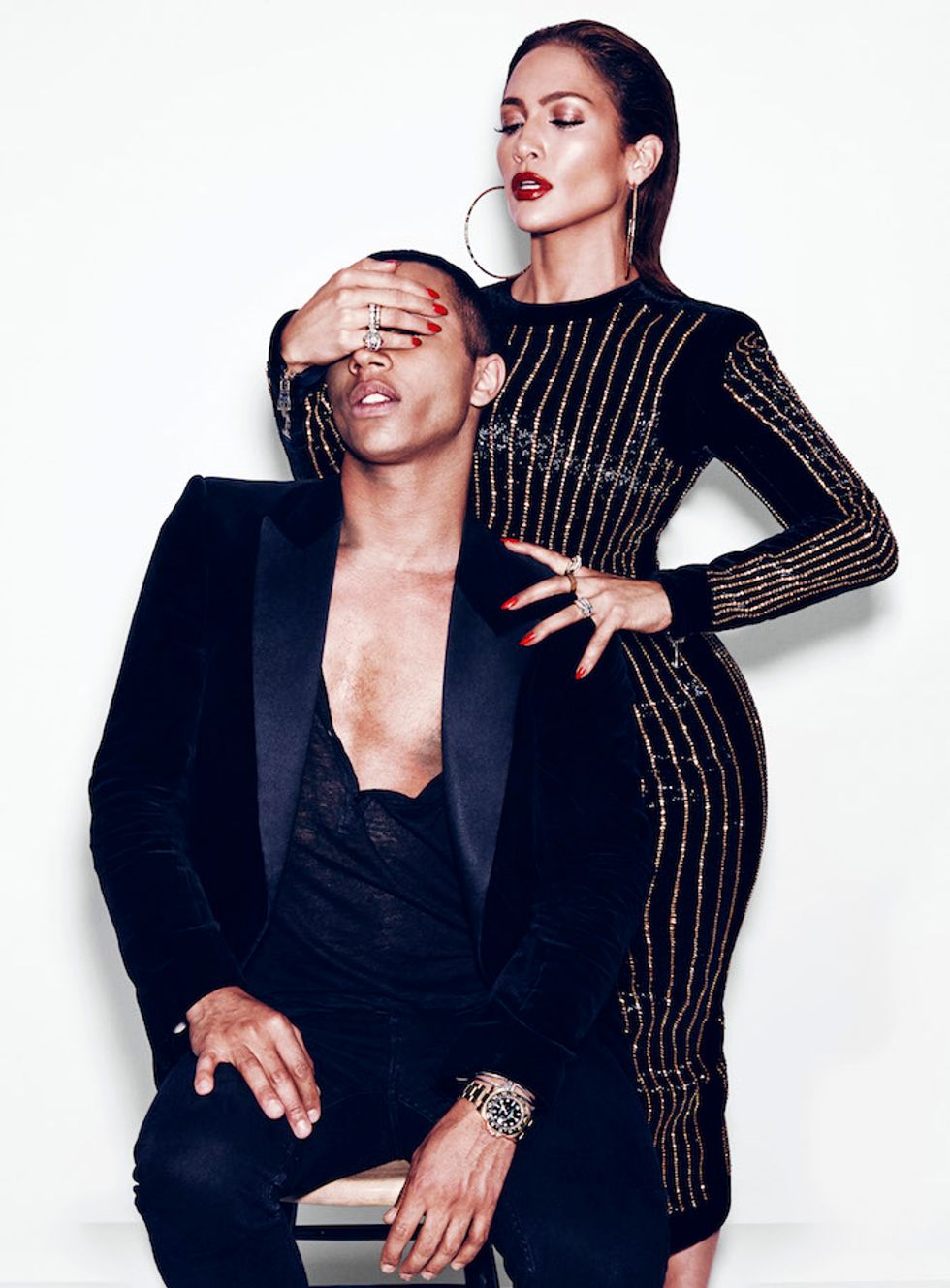 If you were to close your eyes and think "luxury," you might imagine 29-year-old designer Olivier Rousteing being manhandled by superstar stunner Jennifer Lopez. We're pleased to say that, with this story, we have made that vision a reality. Rousteing is four years into his tenure as creative director of Balmain, one of the most talked- and tweeted-about luxury brands in the world; he's also one of the biggest social media stars of his native France. Lopez, sexier than ever at 46 years of age, is busy preparing for her 2016 residency at Planet Hollywood in Las Vegas and killing it on every red carpet she crosses. At their PAPER shoot in the Hamptons, Lopez appeared in a fringed Balmain gown and said, "Fringe benefits!" Those in attendance swooned collectively, Rousteing included. Later, we spoke with the two of them about the intersections of fashion, luxury, race, feminism, pop culture... and nude-male Instas, of course.


Jennifer, photos of the dress you wore for your birthday are everywhere. You look amazing.

So what does luxury mean to you?

Lopez: To me, it's stuff that's very custom or made for you or fitted -- that's how I like all my clothes to feel. And when I think of luxury, whether it's a house or a car or any luxury item, it's like something special about it that feels like you. Or a piece of jewelry -- you know what I mean? It has to have a classic feel to it. I like things that are super trendy. I like things that look like they could've been in this era or that era, but it still feels modern.

Jennifer, what is it about Olivier's work that says luxury to you?

Lopez: Wearing them just now, it feels very much like me. I know probably every girl thinks this, and that's the genius of a designer: everybody who puts it on feels like, "Oh my god, this is made for me!" It's the velvet, it's the sparkle; it's so ready for the spotlight. I think every girl who wears any special thing, they want to feel like they're a star. And that's how you feel when you wear one of Olivier's dresses. Like, "OK, where are we going? There must be something special going on!"

Will we see that kind of specialness in your costumes for your Vegas residency that's coming up?

Lopez: Oh, for the Vegas? Yeah, that's what I'm hoping. That's what we're hoping for.

Olivier Rousteing: I'm for it completely.

Because if you do Balmain costumes, people would go crazy.

Lopez: I think of it like Bob Mackie with Cher, or even with Diana Ross. People like that who really created for a singer, a stage performer. You think of Cher at the Oscars -- that thing she wore on her head and everyone went, "Who did this?" Again, it was so her and it was so custom made. It goes back to how luxurious it was: you wouldn't see that everyday. That's what I imagine the Vegas show to be. I would love to work with Olivier on the show, even if he couldn't do the whole thing, to really create something timeless. We still talk about those things because they made such a mark, but Bob and Cher had a real relationship. It was those special relationships between designers that really created timeless fashion moments and timeless moments in pop culture. 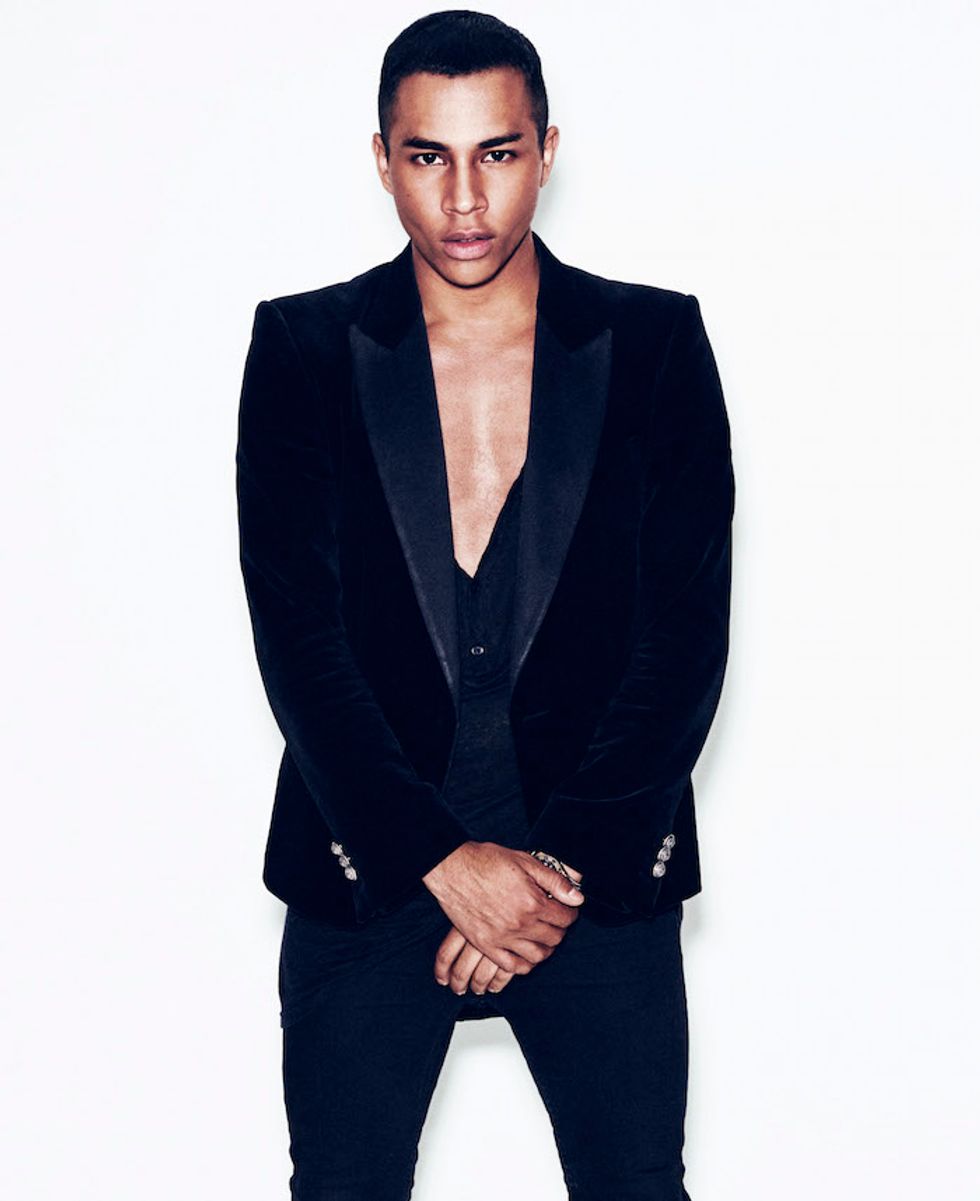 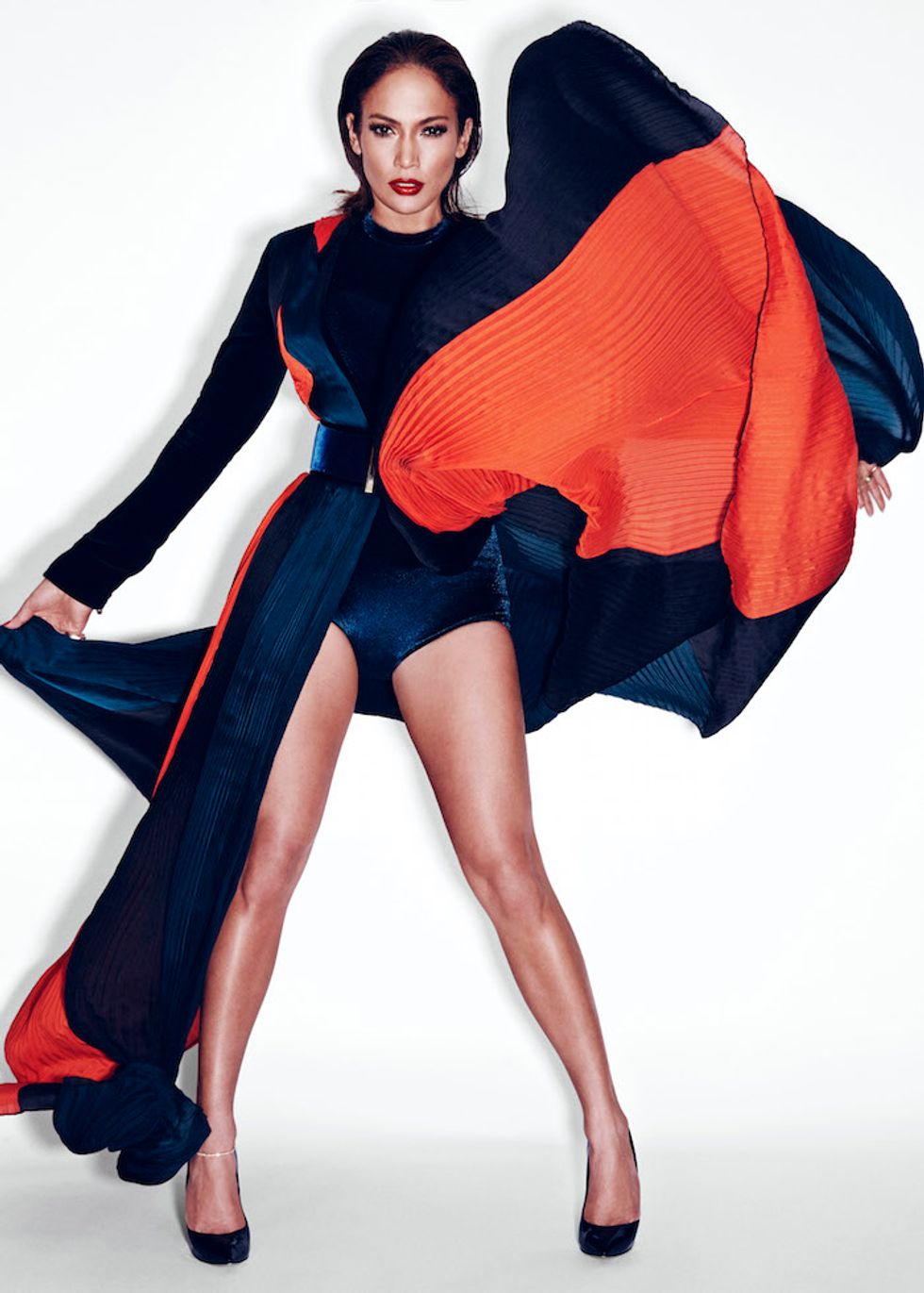 Olivier, I want to know what your definition of luxury is.

Rousteing: For me, luxury today is confidence in assuming who you are, where you are, no matter where you come from. And that's what I think I do with Balmain. A lot of people say it's a party dress or something, and I think Jennifer explained pretty well that she wants to wear it onstage. When you want to wear something onstage, you want to wear it not because it's a party dress, but because it's armor. It's something you feel really strong in that you're going to show to the world.

And your muses are always these beautiful, sexy women who are also very strong.

Rousteing: Yeah. For me, Balmain is almost feminist. It's about the power of girls and women in the world. And that's why I love Jennifer. All the muses that have inspired me are really strong and they sometimes fight against the world to show their own rules, which I think Jennifer did throughout her career and she's still doing it. You see many stars today try to look like her. She imposes her own rules. And when I think, "What is the Balmain girl?" it's this. It's a woman who knows what she wants and is going to express it.

Lopez: The concept of a fearless, strong woman who radiates confidence inside and out is an inspiring idea. It's a great thing for young girls and women to see Balmain's muses illustrated by these ideas of strength and beauty. For them it's about a woman who creates her own destiny and forges her own future.

Do you think that fashion houses need celebrities nowadays?

You've worked a lot with the Kardashians and the Jenners. What draws you to them?

Rousteing: It's what I said -- you go and fight against the rules. Like, there's no taboo. You are who you are and you're going to show it to the world. And it's what I'm doing on my own. I'm building my own business, my own story. When I got the [Balmain] job I was 25 and I was not known. I was not this big fashion name. I come from an orphanage. My parents are white, I'm black. Nothing in my life responds to a normal rule. So I love people who are assuming their own lives and showing people that dreams can come true. 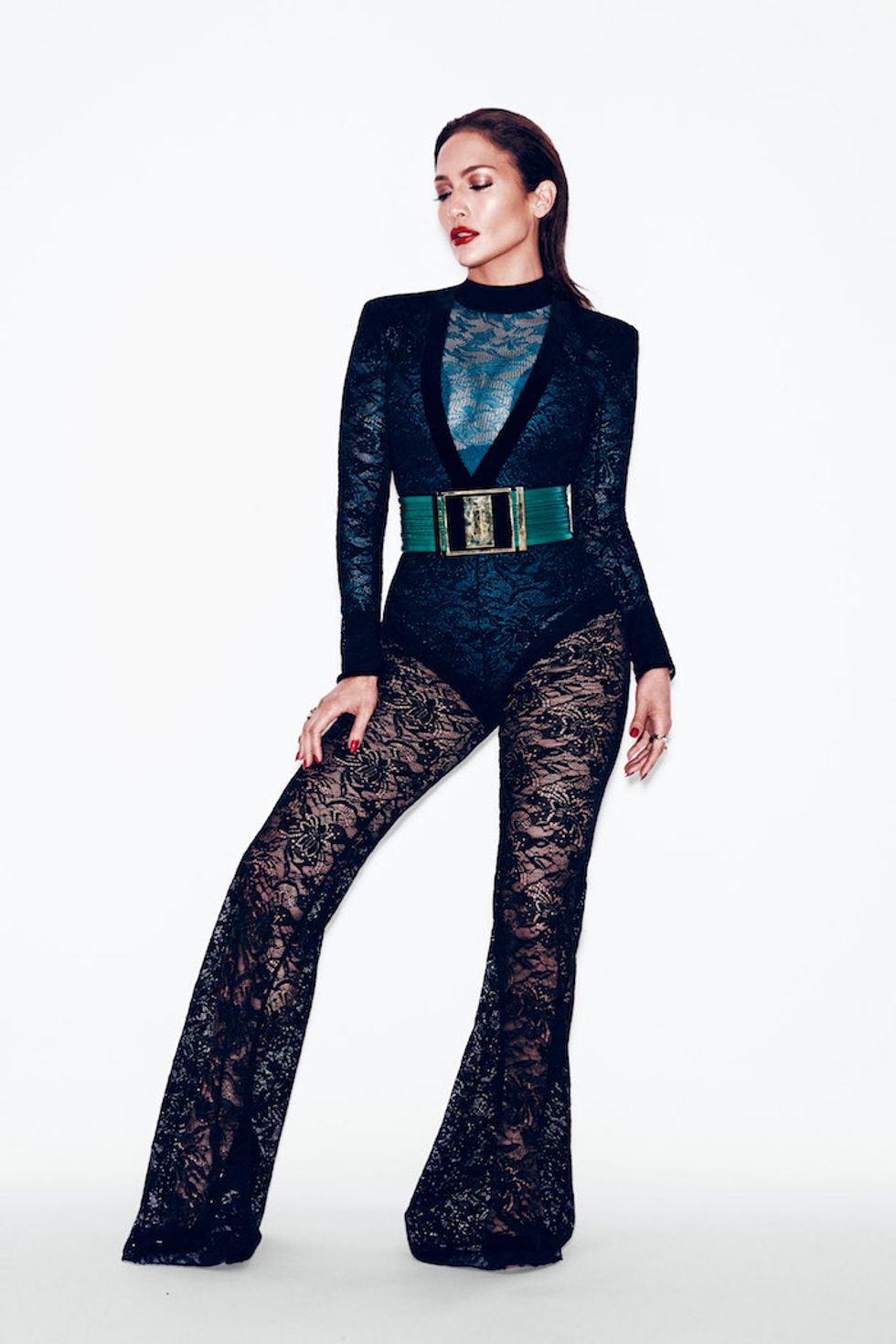 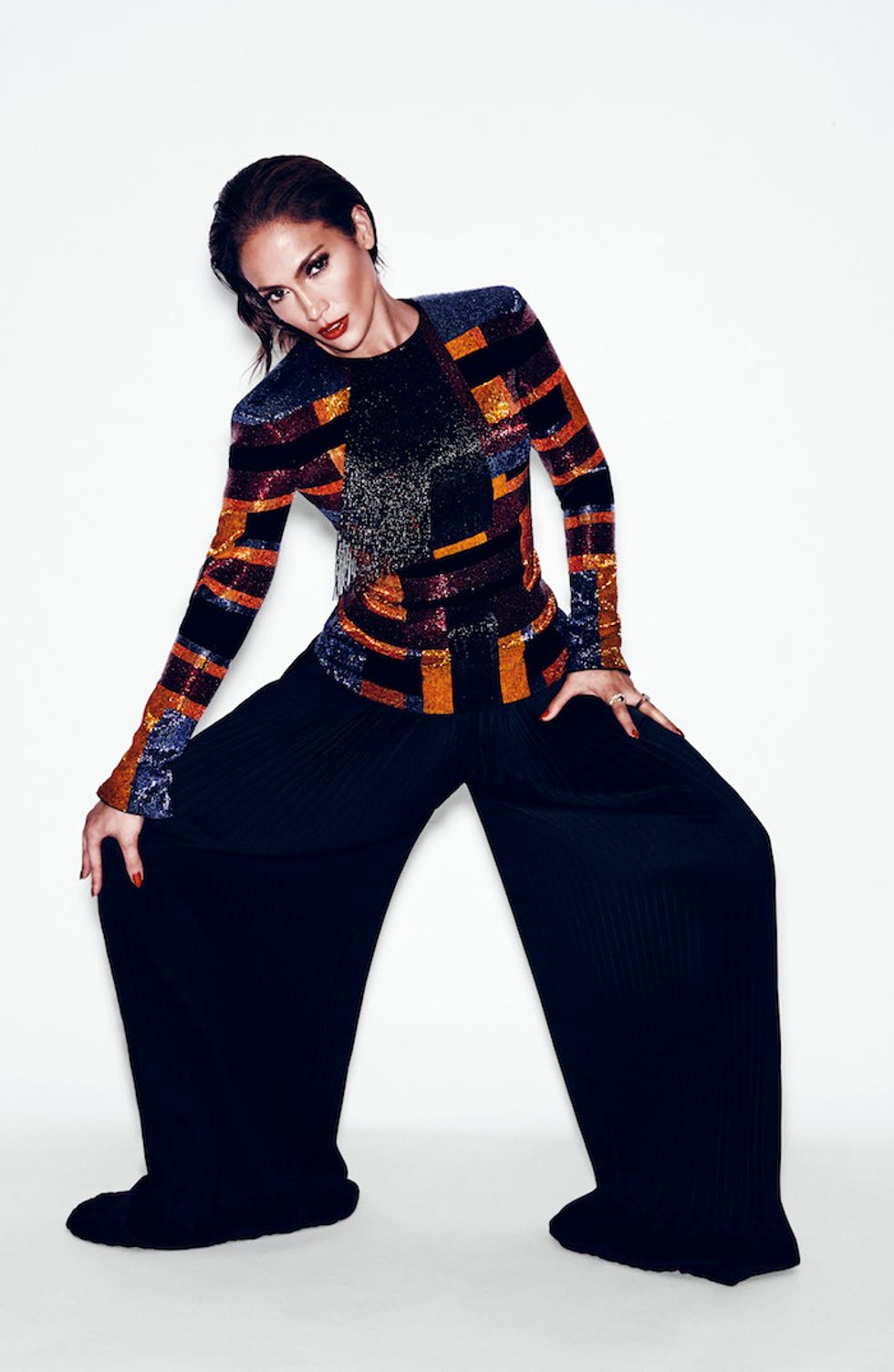 Certainly you play by your own rules on Instagram.

Rousteing: I'm risquÃ©. In French we have a phrase: "Who doesn't take a risk doesn't get anything." And I'm really risquÃ©, but I think Balmain is risquÃ©. Living on the edge -- that's what I love about my life.

Marc Jacobs got in trouble recently because he was a little naked.

Rousteing: Yeah, he showed his ass [on Instagram]. We are human and sometimes people forget that being a designer doesn't mean that you can't actually do what a normal person would do.

One of the things you've brought up before is racism in the industry. Balmain is one of the few luxury houses that cast diverse models. Why don't luxury houses cast more black or Asian models?

Rousteing: Because they're not living in the real world. You asked me why we need celebrities in fashion, which I think was really smart. Celebrities come from music. I think the music system is way more open-minded and way more diverse. Fashion people sometimes forget that, except for the front row that you're going to get at your show, there's an entire world that loves fashion. So it's important for me and for Balmain to show the diversity because it's also about the luxury of communication. And you don't communicate for just 10 people in the room during a show; you communicate to an entire world.

I'm seeing more and more fashion houses go the digital route and not do fashion shows anymore. What is your take on that?

Rousteing: I think fashion shows have to still exist, but I think the new way of showing is what's important now. The '90s were really important to fashion shows because you had Naomi, Claudia, Carla, Linda Evangelista, Christy Turlington. You wanted to see a show; you wanted to see those girls who were so inspiring. Fashion sometimes forgets that you need to inspire people. So that's why I think a lot of people start to get bored of shows -- you're not showing the real woman or real man on the catwalk. You just show hangers that wear clothes, and you don't even know their name and you forget them in a month. Everybody went to a mini-mall trend, so now a lot of shows start to look the same. I think fashion was interesting when you had the big, powerful houses that were not for only a trend. They wear what they wear -- their own identity. In France for example, you have Chanel, you have Yves Saint Laurent, you have Balmain, you have Balenciaga... I think we need to just be different and keep our identity no matter what's gonna be the trend. We just follow our trend.

Speaking of identity, you have a collection with H&M coming out. How do you keep your identity while doing a fast-fashion collection?

Rousteing: It's a bit of a challenge. But it's really, really important for me to keep my identity. It's been a lot of work on the fabric and the techniques because when they were saying, "What is Balmain for you?" I said, "It's couture, it's couture, it's couture." But couture isn't only about embellishment; couture is the amount of hours you're going to work on the fitting, on the tailoring of the jacket to make it perfect. We obviously switched some fabric and some techniques, but we worked so much to give people the DNA of the house. I wouldn't have done this collaboration if I couldn't give my identity. 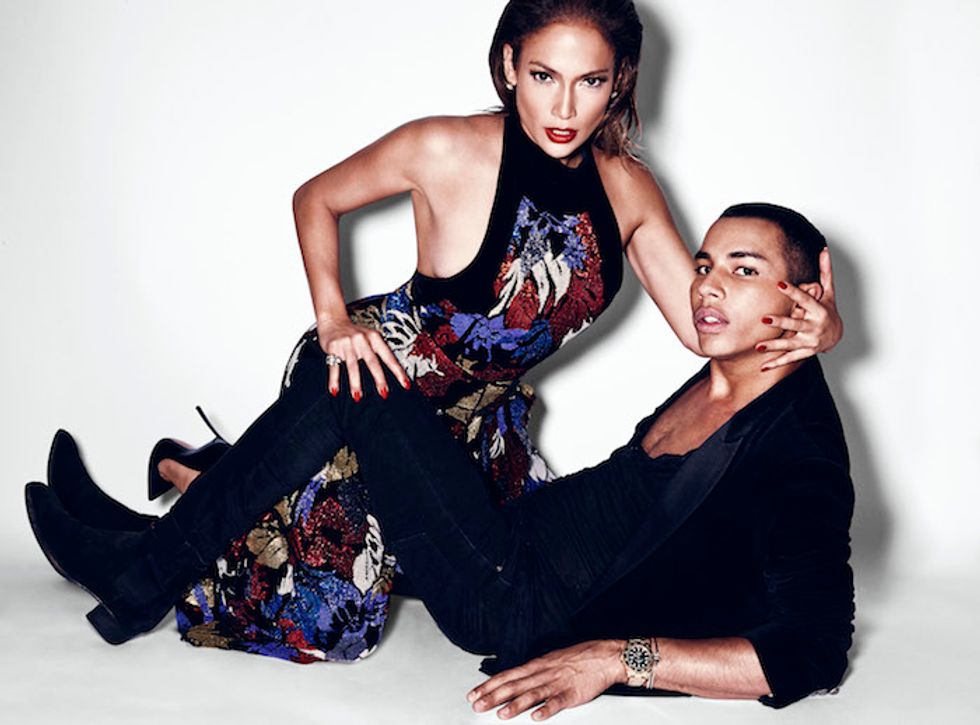 And this will surely bring you new and younger fans who will then become fans of the main house.

I love that you compare it to music, because your line is so entrenched in the music world.

Rousteing: Music is my life. I couldn't sketch and I couldn't create without music.

Lopez: Pop culture and fashion have always had a correlation, from old Hollywood to contemporary music. As a performer, I know that clothes are an expression of the music I create or the character I play.

We're having this moment now where we have Insta Girls and social media is a huge part of fashion. What do you think is going to happen next? Do you think we'll find the next big designer on Instagram?

Rousteing: Yeah. People get bored of what is fake. So I think Instagram is like a big, real TV in a way. A real social, digital story where, when you wake up, you're going to see my reality, I can see his reality, I can see your reality. I think after Instagram, people will go for even more reality. Because from Instagram, which I think is the real story, we're going to go to another app that's going to be even more real. You always want to know more and more and more.

So what does luxury mean to you both outside of fashion?

Rousteing: My luxury today is feeling free. It's freedom. I think it's the most priceless thing. And I'll tell you the truth: if you ask me, "What about Balmain is luxury?" it's not the amount of dresses that I did that cost more than $20,000. For me, luxury is feeling free to express who I am and what I want to do. That's luxury for me.

Lopez: Everyone has their own definition of luxury. For me, sometimes it means the quiet moments away from the business of my life, when I get to spend time with my children and my family. And I agree with Olivier: freedom of choice is a true luxury. We are lucky to have it.

Read Our Cover Story With Jeremy Scott and CL