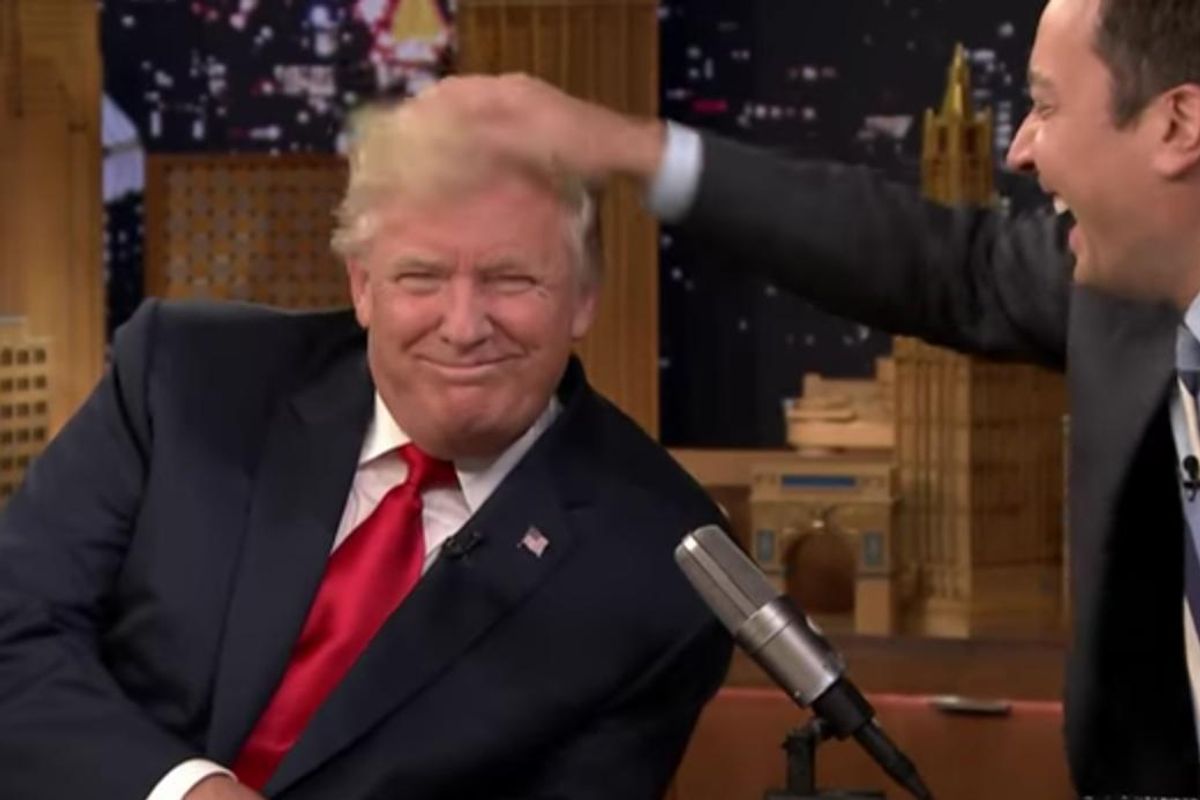 Jimmy Fallon Kept It Light with Donald Trump on the Tonight Show, and the Internet Is Having Zero of It

Donald Trump, who, as of this week, still refuses to acknowledge that President Obama was born in the United States (Update: He reversed his statements this morning), was on the Tonight Show last night.

Jimmy Fallon, an interviewer known for his affability and softball interviewing skills, kept it surface-level. And instead of challenging Trump on any of his many horrendous stances, Fallon joked with the nominee, stuck to mostly light topics (though he did ask him about his 'bromance' with Putin, a person Trump claimed to know nothing about, despite praising him as "more of a leader" than our President last week) and, in a moment that has been trending on twitter since last night, tousled Trump's purported $60,000 weave.

Fallon has never veered into politics the way that his late-night peers and predecessors have. Where David Letterman called Trump a "racist" on air in 2012, eviscerated then-presidential candidate John McCain in 2008 after he canceled an appearance, and, frequently highlighted George W. Bush's blunders during his recurring "Great Moments in Presidential Speeches" segment, Fallon is more likely to have a sitting president slow-jam the news. That said, the Tonight Show's kid glove-handling of Trump has received sustained backlash on the internet today.

I don't fault Jimmy Fallon for not being a journalist. I do fault him for his willingness to serve as hell's court jester.
— Mark Harris (@MarkHarrisNYC) September 16, 2016


Too bad Jimmy Fallon couldn't do an impression of a decent human being last night.
— april lavalle (@imatoofbrush) September 16, 2016


Jimmy Fallon is impartial, like a bowl of pudding, or an autumn day
— Chip Zdarsky? (@zdarsky) September 16, 2016


Remember when the worst thing Jimmy Fallon ever did was laugh during a sketch?
— Jensen Karp (@JensenClan88) September 16, 2016


Trump has built his entire platform on extremism, and covering his campaign objectively has confounded the media, from vaunted institutions like the New York Times to Corey-Lewandowski-employing CNN to Matt Lauer. Expecting Fallon and a show known for its fizzy, digestible humor and Saved by the Bell sketches to press Trump on real issues might feel unfair. But if Cosmo, bastion of crazy sex positions and celebrity news, can ask hard, smart, and fair questions while interviewing Ivanka Trump on the campaign's maternity policy, can't we all? Jon Lovett, former Obama speech writer, posted several searing tweets calling out Fallon and the show for not specifically holding Trump accountable for his racism and dangerous, flame-stoking remarks about minorities, which has become such a cornerstone of his platform, he argues, that to ignore them is to condone them.

What did you do tonight? I tousled a racist's hair to make him seem more likeable because I do NOT do politics.
— Jon Lovett (@jonlovett) September 16, 2016


If you want to see the normalization of racism, it's the host of the Tonight Show interviewing a racist demagogue without bringing it up.
— Jon Lovett (@jonlovett) September 16, 2016


This photo will be in history books and the caption will not be about how Jimmy Fallon is such a fun nice guy. pic.twitter.com/e18PNk9FTa
— Jon Lovett (@jonlovett) September 16, 2016


Have Trump on! Keep it light! But to not ask even one question about racism or any of it? What would Carson do? Conan? Letterman? Cavett?
— Jon Lovett (@jonlovett) September 16, 2016


What on earth would Trump have to say so that Fallon couldn't ignore it? What is left? What a shameful little display that was.
— Jon Lovett (@jonlovett) September 16, 2016

While this rings true, it's also true that Jimmy Fallon is not the first to "normalize" and package Trump in a "this guy!" veneer that's palatable to the country as a whole. As early as November 2015, Saturday Night Live had him on as host for an entire episode (they also faced similar outrage and NBC was forced to give equal air time to all of the then-GOP nominee candidates). But November 2015 racist megalomaniac Trump was a quaint, folksy bigot compared to the Trump campaigning nearly a year later. That was then, and this is now.

Fallon should have the Kahns on. https://t.co/uDfkgVOeiY
— Jon Lovett (@jonlovett) September 16, 2016