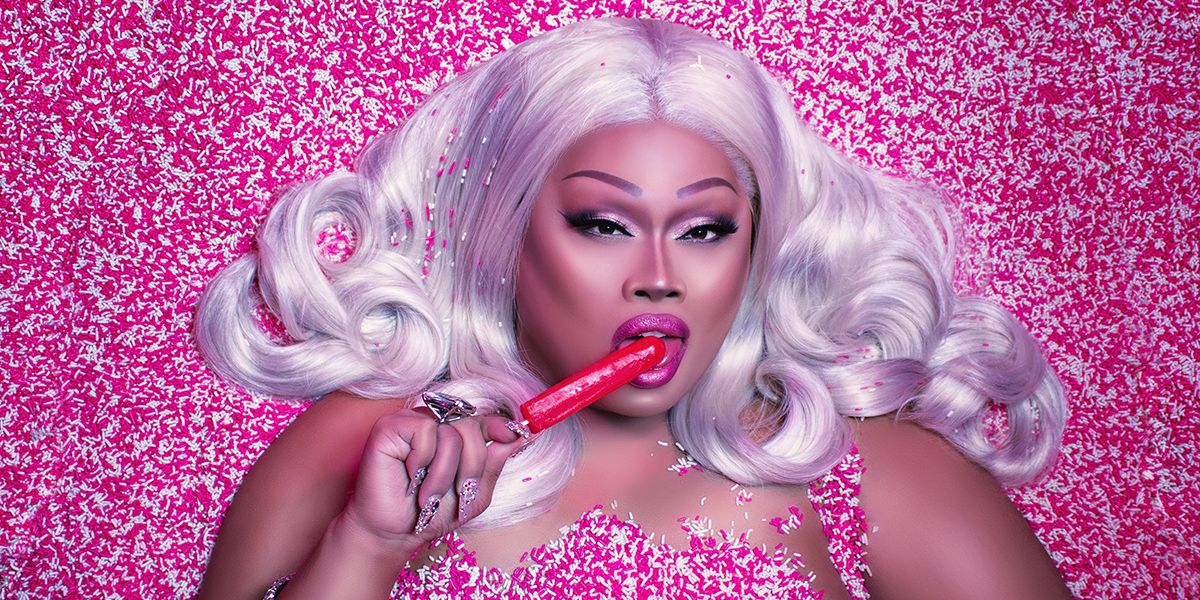 Jiggly Caliente is one of Drag Race's most enduring queens — a fan favorite, whose post-show transformation has been inspiring to watch. Now, as a proud trans woman, she's taking on a new role: musician. Caliente's first album, T.H.O.T. Process, is out today, along with a music video for lead single "I Don't Give a Fuck," featuring Sharon Needles. PAPER caught up with Caliente about giving dust to her haters, who she'd cast in her drag supergroup, and her thoughts on RuPaul's recent controversial comments.

Your video is called "I Don't Give a Fuck." Who is that aimed at?


It's not necessarily anyone in particular, its more like an onslaught attack to anyone who thinks their opinion about me and my life matters. This is to everybody who wants to have an opinion on my life, me as a woman, or my drag — it's like, fuck off, who do you think you are?

How did your drag evolve into music?

It was a slow progression. I've done songs on [RuPaul's] Christmas album, but I'd never thought of doing an album. I got the bug and I was like, you know what: let's try this, why don't I try to be like JLo and do acting, modeling and singing, why not? Let me be a real triple threat.

Sharon Needles is featured on "IDGAF," can you tell me about that collaboration?

I needed a girl like Sharon on this song. I needed someone who had the same vision of not giving a fuck, who knows what their opinion is and stays true to their opinion, no matter what the naysayers want to say.

And who are some of the other features girls on the album?

I have a song called "Pretty Girl Anthem" with our trans sister, Peppermint — I wanted a song you could bop to while you were getting ready for a night out. I also have "Beat of My City" with Phi Phi — I love New York, and Phi Phi just moved here and was falling in love with New York as well, so it was perfect for her to sing that song with me.

Music by Drag Race queens is almost becoming its own genre — you have Alaska, RuPaul, Willam — where do you see your music fitting in?

I wanted a hip-hop album, because I needed it to be authentic to who I am. The fact that I'm from New York City, growing up here hip-hop is such a huge influence in my drag, let alone life. I think I'm pretty much the first queen with a full hip-hop album. The other girls have dabbled in it, but I'm like, this is the whole thing.

Who are some of your hip-hop influences?

Dua Lipa also has a song out right now called "IDGAF," and she recently performed it live with a supergroup of up-and-coming pop stars — Charli XCX, MØ, Alma and Zara Larsson. If you were to form a supergroup of Drag Race girls who make music, who would be in it?

Gag, where do I start? OK, I'll start with my New York girls: Peppermint, Aja, Phi Phi — but Phi Phi has to be in drag for this one.

Is she allowed to be acapella?

No. I'm going to get murdered for that comment. I'd also have to have Shea Coulee, Sharon and Alaska. Imagine a supergroup like in Taylor Swift's song "Bad Blood" with all the girls, that would be my ultimate girl squad. Willam on top of that with her problematic mouth, Adore — it would be so crazy to have all these girls — although we pretty much are an army of girls right now, with everything going on politically. It's so amazing how our voices are becoming a voice for our generation where maybe 8-10 years ago this would have never happened. It's pretty amazing.

Obviously this week there's been a lot of conversation around RuPaul's comments about having trans queens and bio-queens on Drag Race. As a trans drag queen who competed on the show, what was your reaction to that?

My initial reaction was... shocked. I was like, is this real? I thought it was clickbait when I first saw it on Twitter. And then when I actually read it was like, wow. And as I sat back and really read it, I can see her point-of-view as far as why trans girls and bio-queens — or hyper queens — would be a wrench in the system; it's her show, her rules. But at the same time, things are changing — but I know she's a woman of a certain age, and older people sometimes don't want to listen to the new generation. So I thought, maybe someone needs to talk to mama and be like, there's also another a point-of-view for you to see. But what bothered me was the language — and it's not just Ru, but the interviewer, I thought the questions were being led and baiting her to answer in a certain way. And the language of transitioning, that's a sensitive subject for me.

I have a bad heart and cannot go under anesthesia. So I'm not going to be able to get my breasts done or gender reassignment surgery. That language hit me hard, because I don't think genitalia or surgeries make a woman. Gender identity has nothing to do with whatever surgeries anybody has, so for RuPaul to have said that Peppermint didn't fully transition until after the show because she had her breasts done, that language is dangerous because you don't want to let your younger audience or young trans people coming up think that you need to have surgery to fully be who you are. It's nice to have your outside match your insides, but sometimes it just doesn't work that way, so I thought that was such a bad way to talk about transitioning. I would hope that Ru would've been more responsible with the words she chose and said that.

Did you feel immediately that you needed to speak out about it?

I was really conflicted [about] saying something, because Ru just did my album and from what I'm told it was without hesitation on her end, so I don't think she's transphobic, I just think Mama Ru is a little misinformed when it comes to gender identity.

That's why it's so important that we have queens like you and these younger girls coming up who are educate the elders in our community. I was personally surprised that RuPaul even apologized. Do you think that's a step in the right direction?

It definitely is a step in the right direction; it's moving in the direction where we can have a positive conversation about this. People make mistakes, nobody in the world is perfect. I am a very flawed individual, so for Ru to take responsibility is a great move. She knows that she's hurt people with the words she said, and I'm glad she said something and it was addressed sooner rather than later.

On a lighter note, have you been watching All Stars and who are you rooting for.

Of course I've been watching. First and foremost, I was always a fan of Drag Race, I love the art form of drag, drag has helped me find who I am, not just as an artist but also as a woman. Drag has helped me figure out my way, and I love this show, I will forever be a fan of it. I was rooting for Dela, but she decided to get all Jesus Christ on everybody and sacrifice herself. Really girl? Now it has to be Shangela. Shangela has the most wins after Dela, so it should be Shangie.

The trailer dropped this week for season 10, and now there's a whole new group of — very young — queens about to become celebrities Do you have any advice for the new girls?

Don't drink the Kool Aid. I don't care what anybody says about you, I don't care how fierce they think you are. The fans don't know the true you, so never drink it, [or] you can lose yourself really quick. Stay humble, because at the end of the day you have to know who you are and be genuine and know where you come from.