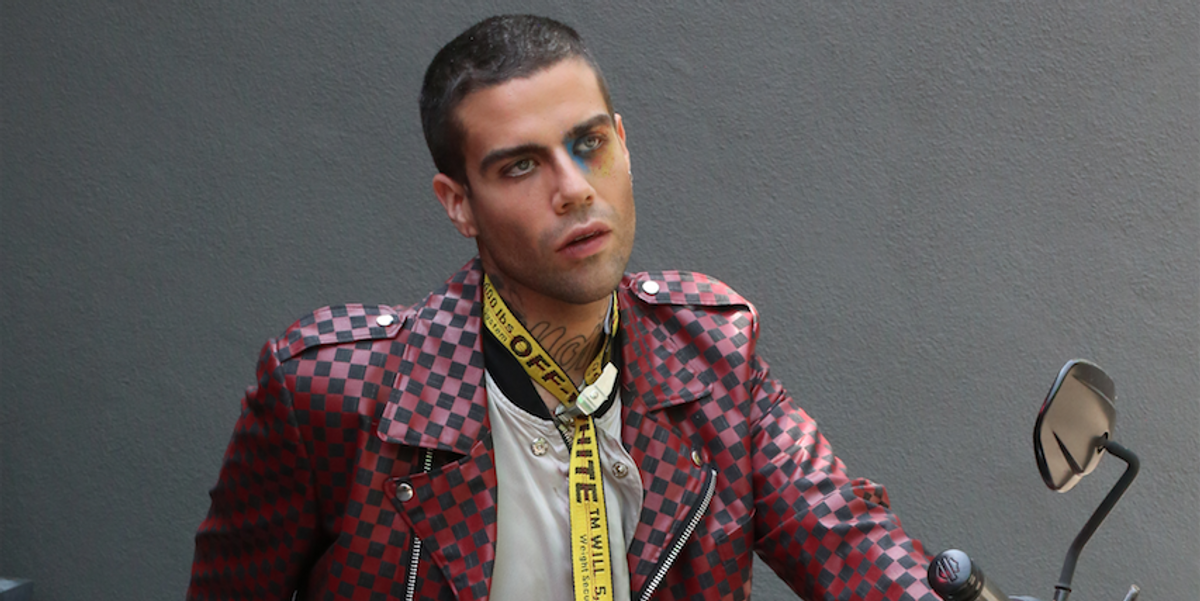 "I'm coming out of the closet! It's my second coming out," laughs Jesse Saint John. The career songwriter has only recently unveiled his personal artist project — and already, he's basically a pop star.

Having worked with artists like Sia, Carly Rae Jepsen, Charli XCX, and Britney Spears (his childhood icon, like so many millennials), Saint John could easily count his collaborations as life goals accomplished. His publishing is co-signed with Sony Music. He co-wrote "Something's Gotta Give" with Camila Cabello, and he's riding with on-the-rise artists like Lauv, too. Where do you from there? Are there even peaks to reach beyond these songwriting successes?

Emerging from behind the scenes and achieving the same popularity as an artist — presenting yourself solo — could be one. But Saint John didn't mastermind his debut; this "coming out" wasn't premeditated, per se. It wasn't until he wrote "Move," holed up in a writer's retreat in Colorado, that he realized he should claim the song for himself.

What was the process like for making "Move," and how did it compare to songwriting you've done for other people?

I wrote this with a couple of my friends, one being the producer, Tim Pagnotta, who did Walk The Moon and Neon Trees. We were in this writing retreat in Colorado; it was amazing, it was ice cold and so fun — and so separate from LA; LA gets a little stuffy. It was nice to be out and away from the whole songwriting world.

We were just playing around [on] the last day of the retreat. We were like, "What haven't we done?" There's a lot of sameness in the pop world, which I love and am happy to do, but on the last day of writing for seven days in a row, we were like, "Let's do something still pop, but funky, that we're excited about." We shared a bunch of influences, like Passion Pit, MGMT, Justice. We were like, "It'd be fun to do something kind of like this today," and then I was like, "Yeah, you know, like Uffie!" And he was like, "Who's Uffie?" He's from a more emo, alternative background, which is so cool, because I love that whole vibe too. But I showed him Uffie and he was like, "This girl is amazing." We ended up writing "Move" that day — not necessarily for me, because I wasn't an artist at the time; I was just a writer.

The more I lived with it, I was like, "Who could I send this to? What girl would sing this?" And then I realized, I was the girl who would sing it. (Laughs) I kept listening to it over and over and I was like, "If this wasn't my song, I would be jealous. I would be like, 'Oh my god, this person got to release this song, and if I was an artist, I would want to release this song.'" And I [thought], maybe I am an artist.

Yeah, there is a cowbell in there!

It just reminds me of when I used to go dancing to electroclash kind of shit.

One thousand percent. I was super inspired by bloghouse. You know, all those amazing people, Does it Offend You, Yeah?, the Black Kids...

Yes! That's so many memories for me.

That's when I was in high school and I was in my lonely Orange County world. And I was like, "This style of music is so sick, I wanna go out to Hollywood and find these people!" (Laughs)

There wasn't anybody into that in Orange County at the time?

Me! I don't know, I was in high school doing theater and stuff.

I went to LA around that time, I went to some club — I just remember dancing to Le Tigre.

Oh my god, Heaven! Then when I got a little older, I saw Cinespace and Bardot and all that stuff. I was like, "Oh my god, I have to go there." I know it's just an hour away, but Orange County feels like a whole other world when you're there.

Did you move out to LA soon after?

Yeah, I moved to LA pretty soon after. I mean, when I was old enough to leave my mom's house.

What are the plans for your career as a solo artist moving forward?

Right now, it's really small. It's a lot of just me, which is great. We live in an era where you can kind of handle so much of the music output by yourself, just with the Internet, Spotify, and YouTube. I've had these amazing offers, which is great. The song's been out for a week-and-a-half or something (Laughs), and I'm really blessed with the way people have been reacting to it with different offers. Right now, I don't have management for my artist project; I don't have a booking agent or anything like that. I'm open and trying it on my own, which is great. I have no major plan for it; I'm just grateful to get my stuff out. I knew it would be fun and exhilarating. I have another single coming out in the next couple of months that I'm really excited about. I'm shooting the video in a couple weeks, and I'm still writing every day for other people.

Right. Are you releasing a video for "Move"? I saw some clips on Instagram...

There's not like an actual music video for it. It's just content to promote the song. I just filmed clips and things like that, then there's like a lyric video as well. I think that's kind of the modern way. Unless you're, like, Selena Gomez or something, to do a traditional album, and release a single with a music video... When you're just first starting, it's [about] creating content to get people interested and keep the buzz going.

I get that. It's an interesting way to go about it, because most people still do it that traditional way.

It's been this really interesting dichotomy when people hear my song and see my visuals. At first, they're like, "Are you alternative or pop?" And I think more people have been leaning toward telling me I'm just like a normal pop star who's using alternative, underground aesthetics and sounds to further my pop career, which is great. I never thought about it before I put ["Move"] out. I think it's up to everybody else to decide what I am. I don't really want to label it because I never really limit myself in that way.

You've previously said that you didn't want to release music because you were worried about what labels would be projected on you. You definitely have pop sensibilities, but the influences you're talking about in this song don't necessarily fall in line with that.

Exactly. I come from the pop world. I've obviously written for Britney Spears — you can't get more pop than that. But my influences are really just all over the map. I grew up worshipping Britney Spears, so I'm a mix of all my little influences, and I'm happy that way. I think the more that I try to put a label on it, the more it limits what I'm able to do, and that is the killer of creativity.

I hear that. In terms of what you're writing about it, "Move" wasn't intended for you, so it's not necessarily personal, right?

Yeah, totally. I mean, I think everything that I write, whether it's for me or for somebody else or with somebody else, there's always going to be pieces of me, and then pieces that are just totally universal that I think anybody could kind of find themselves in. So I think, while it's not "I was eight years old when my dad walked away" (singing), it's not literally...

Right. (Laughs) Or like a Dashboard [Confessional] song. But it's part of my story. It's definitely part of who I am. And as I've been writing more for myself... I always have this motto, which is like, "Don't give anything to somebody else that you wouldn't sing, and don't sing something that you wouldn't be comfortable giving to somebody else." If you make it too personal, it's hard to relate to. And if you make it too universal, nobody can really relate to it.

So I think I'm always going to be operating from that perspective. "Move" is about being into the wrong kind of person: "I must be a masochist to love you 'cause you never come around/ Waiting by the exit for you..." It's somebody who you're longing for, and you're like, this isn't fulfilling, but for some reason I have to keep doing it. And then my next single is about "fake it until we feel it."

As I've been writing more for myself, songs that I gravitate toward keeping are the ones that are about this search for fulfillment, and this constant longing, and this forlorn kind of energy. I think there's beauty in this dissatisfaction of constantly searching for more fulfillment. I think that's a big theme through my lyrical content for my artist project. Sonically, it's definitely bombastic, and there's fun, and there's really bright elements to it — but there's this sort of icy emptiness somewhere in there too that I am loving right now.

I like that a lot. Is it too personal to ask if that's a reflection of your personal life? That longing and forever searching for more, and better?

Yeah. I think generationally that's a thing for millennials as far as this constant search for fulfillment where, as a whole we're sort of the most dissatisfied generation.

I think we have reason to be.

Totally. Of course. I think it's the world that was sort of handed to us and what we're dealing with. I think that social media gives you a lot of dissatisfaction as far as comparing your lives to other people, and just constantly searching for connection in a world in which we're supposed to be the most connected generation, yet somehow we still feel so distant from the people around us. I think it just speaks to the sort of energy of where we are right now as a community.

See, and pop has a lot of depth sometimes!

I think the best pop has depth. It can be said simply, but it can still have a lot of depth.

I agree. That's the other thing I learned when I first started writing pop and writing for other people... writing music basically. I used to write these amazing long, massive songs and then I would get in the room with people and they would be like, "This is dope!" Now make it half the amount of words. So [pop] makes you choose your words really carefully, which I try to use in my daily life — to speak as concisely as possible.